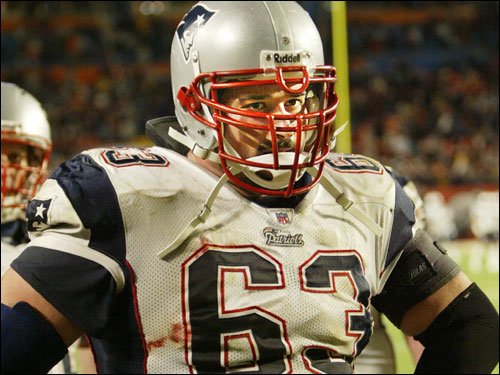 The Patriots will be without starting center David Andrews for the foreseeable future due to a bout with blood clots in his lung, according to reports earlier in the week.

The Patriots will likely turn to fourth-year pro Ted Karras, who has started in five games in his first three seasons, with two of them coming at center.

I spoke to three-time Super Bowl champion and former Patriots guard Joe Andruzzi about replacing Andrews and some of his favorite memories from his playing days:

EL: What goes into calling out the protections for a center on the offensive line?

JA: “It all revolves around the quarterback. You hear Tom [Brady] coming to the line he’s going to give a mic call, and the protection is already called [in the huddle], so you know what’s next. With that mic call, it gives the OL a protection call on whether we have the mic on a certain play or if we slide out to the WILL [linebacker] or we might be sliding out to the SAM linebacker or whoever is in place there, it might be a nickel back. So it all revolves around Tom making the mic call on the plays, even for the run plays too. If he changes the play, you hear the guys scream it out ‘rerouting’ or making new calls, which depends on what plays are associated with which calls and that’s probably up to Tom nowadays and Josh [McDaniels]. With offensive linemen, you have to think on your feet, and you have to be quick with your decisions.”

EL: Is there any time in a game situation where it would all fall on the center to make the protection calls?

JA: “Once the mic call is set, then I know I was one of the veterans back when I played with [Mike] Compton, [Dan] Koppen, guys like Matt [Light], with many of those guys a lot of the times a call didn’t have to be made because you knew what was coming. But even changing the play and making different calls, it comes to a point where it doesn’t matter if you point at the guy that you’re getting, the d-lineman or the linebacker, you point at him, you’re still going to block him no matter what, let them know. More or less, you have to have five guys working together as one, so it’s not just the center. It’s all five guys being able to associate, being able to make those calls too and understand that it’s not just the centers’ job. The center can sometimes make one call, but the mic call might change the call between the tackle and tight end or the tackle and guard, so it’s up to the whole line listening and relaying the message getting all five and sometimes six with the tight end on the same page is not always easy, but we’ve done a good job of it over the last 20 years.”

EL: How do things operate when the offense is in a no-huddle or hurry up situation?

JA: “Then it becomes more on the center. That being said, you still have to wait for the mic call, and you still have to relay the message. Most of the time the center is going down to the ball and getting ready so maybe sometimes with the guards in a two-point stance, the guard might be able to make the call. Back in my day, [Mike] Compton being the shotgun snapper as opposed to [Damien] Woody until Dan [Koppen] handled those duties, you always wanted to get the call out there and not wait for it, so if I get to the line and I see it before somebody else, I’m yelling it.”

EL: How hard is it on the rest of the offensive line to have a new center making those calls?

“Dan Koppen came in and started his rookie season [in 2003]. He was a rookie, and he had a good understanding of the offense but knowing that we had to bring him up to speed because even though he played at BC, big-time school and everything, but it’s tough on you playing your rookie year. It’s a long, grueling season for any player but you have a guy that is a rookie, I know myself, I played at a small school, and I only played a ten-game season. I wasn’t playing any bowls or anything, and I was home for Thanksgiving every year. When he [Koppen] stepped in, he’s the new guy, and being able to know when Tom makes those calls sometimes when you’re a rookie, you second-guess yourself. Dan [Koppen] was a very smart player, but knowing he had veterans around him and going up to the line me being one of the veterans and trying to take him under my wing and sometimes helping him make the calls. But when you got a guy like [Ted] Karras stepping in at center, he has been with the team; it’s his fourth year in the league. I know Dante [Scarnecchia] isn’t holding him back, Ted gets time in practice. He gets time with the ones, and he gets time out there in pregame or pre-practice snapping the ball to Tom and snapping the ball to Brian [Hoyer]. They’re all switching up and getting different snaps from each center.

Nobody is on that roster, especially with the Patriots, collecting a paycheck. If you’re on the roster 53-man roster, you’re pretty much going to be doing something in a game. Look at the defense, and how many guys end up going into the game, I remember seeing everyone that suited up on defense went in for at least one play, whether it’s defense or special teams. Every guy has their job, and every guy has their opportunity, and now Ted is that versatile guy like Russ Hochstein. You think of Russ back in the day, and he came in for the ‘03 playoffs, and we didn’t miss a beat. He was the next guy up, he came in there, and we didn’t give up a sack the entire postseason, and we went up against some of the top defensive linemen that were playing that season. I remember him going out there against Kris Jenkins in the Super Bowl against Carolina and people talking a lot of smack, and being that we had a rookie center too, we walked out of that whole postseason without giving up a sack and then being able to hold up that trophy again was an amazing feeling. Russ can gladly say that he prepared and he was ready, and I’m sure Ted will hopefully say the same thing. A lot of it had to do with Dante Scarnecchia. You’ve heard his name time and time again. He understands the OL, understands which guy is next and he prepares everybody as if they’re a starter. It doesn’t matter where you are on the depth chart.”

EL: Was Dante Scarnecchia as fiery as he is now back then?

JA: “That’s why we were always far away from all the fans because of a lot of screaming and yelling. There are a lot of kids out there, so a few choice words but Dante was probably the best coach that I ever had. He’s a guy that’s going to prepare you and put you in the best situation. He gets you going and gives you a good understanding of each game plan. He may cuss you up and down the field, but he’ll walk off that field win or lose and put his arm around you, if he can reach, he’s a little shorter and asks you how you’re feeling or asks how the wife and kids are doing, he’s a personable guy. He understands that between the lines it’s business, so he was definitely by far one of the best coaches I ever had.”

EL: I always assumed that the offensive line was in the back on the practice field for that reason, but it’s funny to hear you say it.

JA: “I don’t know the real reason, but that was always the joke with us.”

EL: The 2003 Super Bowl, you said that you guys didn’t allow a sack the whole run, is that the one that resonates with you the most?

JA: “No, even 2001. You look at ‘01, we got a guy that can’t shotgun snap and was the starting center. Many teams have the third-down specialists on the defensive line; we have the shotgun specialist. Mike Compton stepped in, and he was a better shotgun snapper. As a defensive line, you see Mike Compton, even in shotgun you can run the ball at times but most likely when Compton goes to center it’s going to be a pass. What does that mean to the defensive linemen? They’re pinning their ears back and speed rushing, so when Mike goes to center, they’re licking their chops because all they want to do is pass rush. That was pretty tough.”