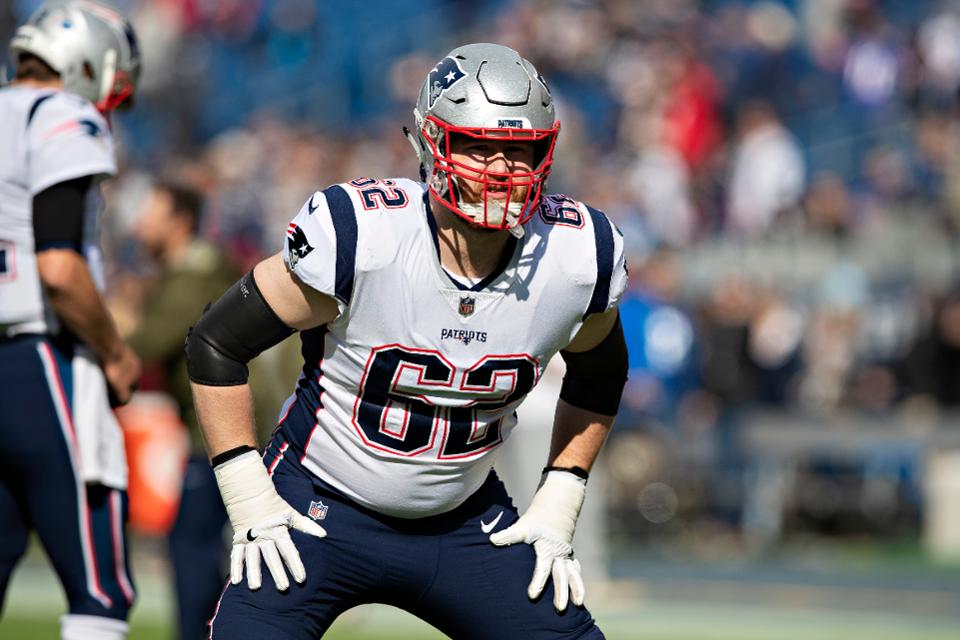 Few players have improved year-to-year while being remarkably durable quite like Patriots left guard Joe Thuney, which is why he makes his first-ever appearance on our list.

Since the Patriots drafted him in 2016, Thuney has only missed 34 snaps in four seasons, starting all 74 games, including playoffs, and has developed into one of the league’s top guards.

Over the last two seasons, Thuney has allowed only one sack in pass protection against formidable opponents every week and was stellar for the Patriots in 2019.

The 27-year-old was also fifth among guards in overall Pro Football Focus grade, one of three offensive linemen to play 600-plus snaps without committing a penalty, and had the second-highest wins above replacement by a non-quarterback on the Patriots offense.

Durability, consistency, and elite play are head coach Bill Belichick’s standards for excellence; thus, applying the franchise tag to Thuney this offseason was a no-brainer for New England.

“Joe’s done a great job for us. He’s one of our best players, one of our most consistent players,” Belichick said of Thuney in November of 2018, and those words still ring true today.

A former left tackle in college, Thuney brings the foot speed and redirect skills of a tackle to the guard position. On the two reps against All-Pro Aaron Donald above, you can see Thuney’s tremendous posture, foot speed, core strength and balance, and independent hand usage as he wins back-to-back reps against the two-time Defensive Player of the Year.

The area Thuney’s game that has improved the most is his ability to anchor against power rushers. He’s giving up 30 pounds to Bengals defensive tackle Andrew Billings here, but still drops his anchor and holds his block long enough for N’Keal Harry to work himself open. His base is always sturdy, he plays with excellent pad level and leverage, and he actively resets his hands to keep himself square on his blocks.

Along with being tremendous in one-on-ones, Thuney’s awareness and skill to pick up stunting defensive linemen or blitzers from all directions show incredible savvy at the guard position.

In these two clips, Thuney passes off an interior stunt (T/T) with center Ted Karras and a T/E stunt alongside left tackle Isaiah Wynn with ease as he transitions his weight and hands to remain balanced and square.

Even when defenses try to confuse him, Thuney still sniffs out the pressure scheme. On the play above, the Cowboys line up two rushers over the left side of the line. Knowing he has inside help from center Ted Karras, Thuney comes off his initial engagement to pick up the rusher off the edge in enough time to keep Tom Brady clean.

The Pats left guard’s prowess doesn’t stop with pass protection, Thuney is also an elite blocker in space due to his athleticism, awareness, and precision on the move.

On this screen pass that goes for a touchdown, Thuney must decide who to engage once he gets to the second level with two threats to ball carrier James White. As he gets downfield, Thuney sees Karras taking the first of two second-level threats, so he gets on his horse to block the safety and spring White for a score. Thuney’s play speed, recognition, and ability to get a chunk of the safety on the block here is excellent work.

Then, there’s Thuney’s precise and quick pulls from his guard spot. Shaq Mason might be a more powerful run blocker, but Thuney’s agility and accuracy on his pulls are tremendous. Above, the Pats run one-back power from the gun and get a great double team on the right side. Thuney then pulls to the MIKE on the second level, and once again, you see the play speed and perfect body-positioning to lead the way for Rex Burkhead.

The Patriots were unable to reach a contract extension with the second-team All-Pro before Wednesday’s deadline, meaning he’ll play the 2020 season on the franchise tag or be traded.

Although trading Thuney clears nearly $14.8 million in cap space this season, locking up one of their best players long term should be a priority for Belichick and company next offseason.

At that point, the Patriots should have plenty of cap space to absorb a lucrative deal for their starting left guard, who exemplifies everything New England wants in a player.