Lazar’s Ten Most Important Patriots in 2020: No. 7, David Andrews 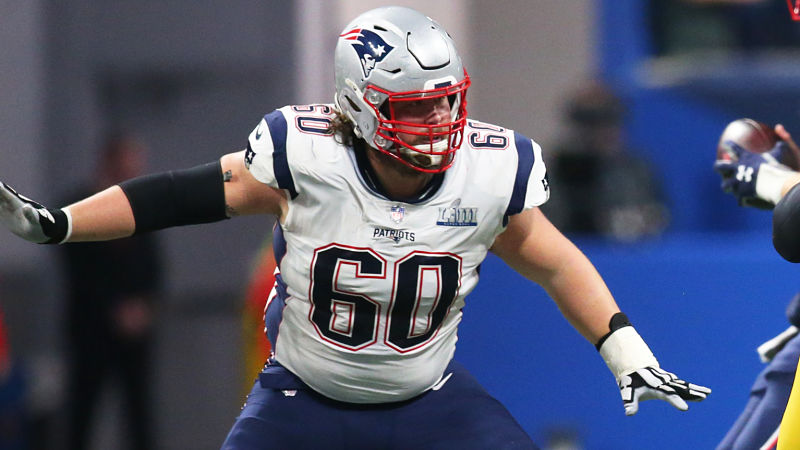 When news broke that starting center David Andrews would miss the entire 2019 season due to blood clots, the Patriots knew right away that they lost their tone-setter on the offensive line.

Along with bringing a nasty attitude to the trenches, the Pats center was Pro Football Focus’s eighth-best center in 2018 and has never dipped below a 67.0 grade as a starter.

Andrews also gave up the ninth-fewest quarterback pressures among starting centers and was the top-graded center in the postseason during New England’s run to a sixth Lombardi Trophy.

Although he filled in admirably, backup center Ted Karras had an uphill battle to replace Andrews who was a top ten player at his position. In his last healthy season, Andrews was seventh in blown block rate while Karras finished 27th among starting centers in 2019, according to Football Outsiders. Plus, after two consecutive seasons ranking in the top five, the Pats ranked 24th in stuff percentage, or the percentage of runs where the running back is tackled at or behind the line of scrimmage.

The 28-year-old brings remarkable consistency with a well-rounded skill set of football intelligence, sound technique, and athleticism that makes up for lack of ideal measurables.

Andrews’s ability to reach blocks on the line, make blocks on the move, and work well with others gives the Patriots’ OL a gear that it didn’t have with the bigger Karras in the middle.

Here’s an example of how Andrews’s athleticism and sound technique allows the Pats run game to move at a different pace when he’s out there. On the play, the Patriots ran outside zone weak, meaning they’re running away from the tight end. Andrews’s responsibility is to turn the nose tackle shaded in the A-Gap inside to create a cutback lane, which isn’t an easy task because the defensive tackle is outside of him. Andrews works to get his inside shoulder in the middle of the defenders’ chest, torques with his upper body to generate power, and flips his hips inside to create a hole for Sony Michel, making a challenging block look easy.

Along with reaching big run-stuffers on the line, Andrews is an effective blocker on the move, and the Patriots ask him to block in space frequently on screen passes to their running backs.

On this play, the Pats run their “cross” screen with the receivers to Brady’s left clearing out the flat for running back James White. As the play develops, Andrews pulls out in front of White and has the body control and radar on the move to win his block against a smaller safety in space. With help from his friends, White picks up a chunk of yardage and a first down.

Lastly, every center must work well with his guards to execute double teams (combinations) and help out in pass protection when they’re left free to roam.

This time, the Patriots ran an ISO play with James Develin leading the way for Michel. The Jets defense fits perfectly to the play side, but Michel has an escape route cutting off the double-team by Andrews and left guard, Joe Thuney. On the base block, Andrews does an excellent job of absorbing the initial punch from Leonard Williams and stalemating the former Jets defensive linemen, allowing Thuney to wash him down on the double. The two stay hip-to-hip and split Williams’s body down the middle, perfect technique, and present the cutback lane for Michel to spring him on an explosive run.

Due to a confluence of injuries, retirements, and Andrews’s medical scare, the Patriots’ offensive line went from Football Outsiders’ third-ranked run-blocking unit to ninth in 2019.

New England’s pass-blocking also suffered dropping off the top spot in adjusted sack rate in 2018 to fifth in the metric last season.

Andrews is a clear upgrade at center, and his return reunites one of the best interior trios in football with all three starters finishing in the top ten of Pro Football Focus’s grading in 2018.

Plus, the leadership Andrews brings on and off the field in the wake of legendary offensive line coach Dante Scarnechia’s retirement and Tom Brady’s departure cannot be understated.

The center is a key cog in setting the MIKE and making protection calls that tell the other four offensive linemen where to go.

Andrews’ knowledge in that regard, whether its Newton or Stidham under center, is invaluable to a new quarterback in the system.

With the Pats center back in the mix, New England’s offensive line should return to its 2018 form.