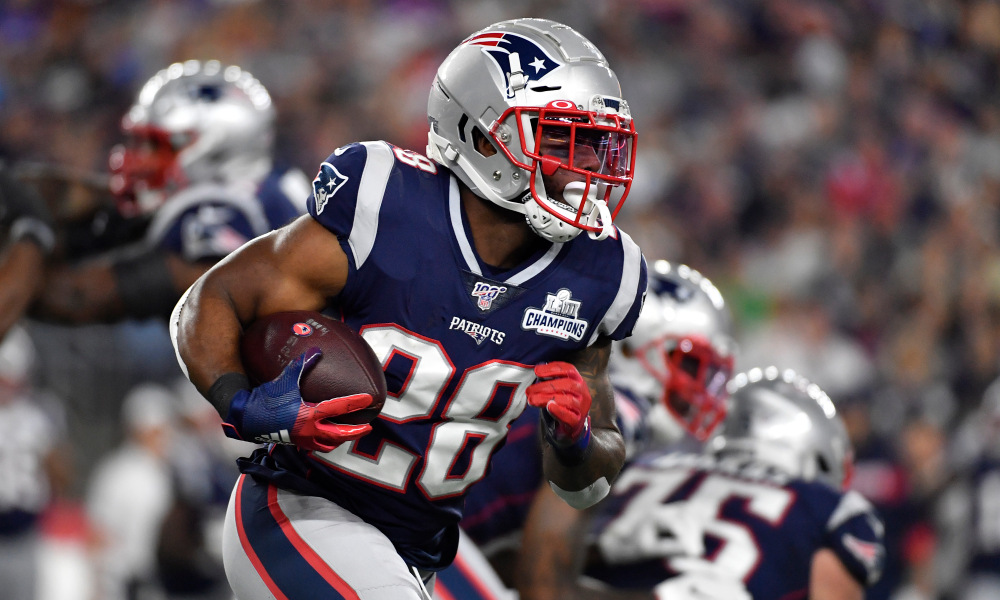 FOXBOROUGH, MASSACHUSETTS - SEPTEMBER 08: James White #28 of the New England Patriots runs with the ball during the first half against the Pittsburgh Steelers at Gillette Stadium on September 08, 2019 in Foxborough, Massachusetts. (Photo by Kathryn Riley/Getty Images)
Share
Facebook Twitter Email

In an era where teams are questioning running back value, one of the most valuable members of the Patriots offense is James White.

The consensus from numerous studies is that most running back production on the ground should be allocated to blocking, mainly the offensive line, and not the individual ball carrier.

Running back value comes by creating yards after contact and producing in the passing game, which is why White, who was third in receiving yards among backs in 2019, makes our list.

Along with ranking third in receiving yards at the position, White also had the third-highest receiving grade among running backs according to Pro Football Focus last season and had the second-highest EPA per target on the Patriots last season (behind only Julian Edelman).

Since 2017, White ranks third among running backs in yards on passes of five or more yards in the air, proving he doesn’t win only on short passes, and is a matchup weapon that can line up all over the formation.

Plus, White is a premier red-zone weapon that trails only New Orleans’ Michael Thomas in red zone receptions (34) and is tied for sixth in touchdowns (11) since 2018.

Due to his success near the end zone, opposing defenses began to catch onto White’s prowess in the red zone and started doubling (or bracketing) him with multiple defenders.

And among all receivers, not just running backs, White also ranks second in yards after the catch over the last three seasons (behind only Panthers running back Christian McCaffrey).

Although White lines up in different spots, most of his receiving production comes out of the backfield where the Patriots hunt matchups against linebackers.

Here’s a staple route for White in the flat that the Patriots call dozens of times a year. The Pats clear out the left flat to give White space to operate against Redskins safety Deshazor Everett in man coverage. In his stem, White reads Everett’s leverage to decide whether to break in or out at the top of his route. With Everett establishing inside leverage, White crowds the defender at the top of his stem and snaps the break off at the sticks for a first down reception.

Quick-hitting option routes are White’s bread and butter, but the Pats will also find ways to attack linebackers in coverage down the field with White as the primary target.

On this play, the Pats clear out a side once again for White, who is working against Bill linebacker Matt Milano one-on-one. White gives Milano a little hesitation like he’s about to break his route off, and then takes off upfield on the wheel route and hauls in a 26-yard completion.

Patriots offensive coordinator Josh McDaniels will also create mismatches for White either in the slot (30 routes) or out wide (65 routes).

In this play from Week 1 of last season, the Pats motioned White to boundary out of the backfield, presenting a mismatch for him on Steelers pass-rusher Bud Dupree. The Pats then send Josh Gordon in motion to get eyes on him, clearing out White’s side to work on Dupree. Dupree takes inside leverage, and White hits him with a return route back towards the sideline for a third-down conversion.

On those screens, White also caught three touchdowns last season, two of which came in the red zone, adding another avenue for the Patriots to get the ball in the end zone.

On this Week 17 touchdown, the Patriots ran their “cross” screen design, where they clear out a side for the running backs release into the flat. With the Dolphins in man coverage, White gets a terrific block from left guard Joe Thuney, who instinctively blocks the defender that has White in coverage, and springs the Pats running back for a walk-in score.

White was the fifth-most valuable player on the Patriots offense last season based on Pro Football Focus’s wins above replacement metric due to his skill as a receiver.

With Tom Brady departing in free agency, White, Joe Thuney, and Julian Edelman are the remaining pillars in New England’s offense that are significantly above replacement level.

Although the value of running backs is diminishing league-wide, White’s prowess as a pass-catcher puts him in a different category than many of his peers.