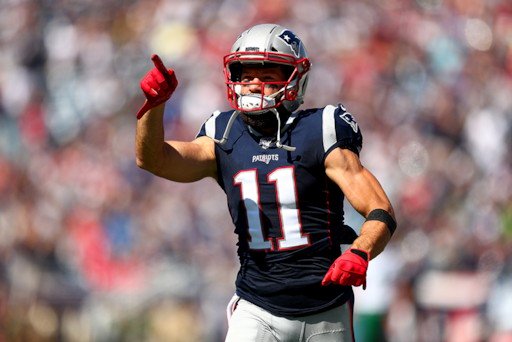 There were times last year where the Patriots passing game felt like a one-man show.

Based on Pro Football Focus’s wins above replacement metric, Julian Edelman nearly was a one-man show, adding almost double (0.34) the value of the next closest Pats receiver (Phillip Dorsett, 0.19).

Despite opponents’ best efforts to take him away, the only thing slowing Edelman down last season was multiple injuries that caused his production to decline a bit down the stretch.

Edelman battled through knee, rib, and shoulder injuries and extra attention every week to have his best statistical season yet, setting a career-high with 1,117 receiving yards in 2019.

The “slot god” or “slottie Pippen” tied for the league lead in receptions from the slot last season (69) and has the second-most receiving yards out of the slot in the last two seasons combined (1,289).

But to truly understand Edelman’s prowess, one must turn on the tape to unearth one of the best route runners in the league that specializes in attacking angles and setting up his breaks.

The Pats wideout expertly knows how to move defensive backs out of his way, creating a path to run his route without much contact, allowing himself to run full-speed through his breaks.

Here, the Patriots put Edelman in a tight split with Mohamed Sanu to get him a free release. Bills corner Taron Johnson has outside leverage, so Edelman angles his stem inside to get Johnson to move inside with him. Once Johnson jumps inside to match Edelman’s release, the Pats wideout jumps back outside and takes that extra step upfield, called a “stair-step,” to sell a vertical route and clear Johnson for his break. Then, he makes a sharp cut back inside on the dig route and loses Johnson in the process.

The former Super Bowl MVP can also defeat press coverage at the line of scrimmage by attacking leverage. On the play above, Steelers corner Cameron Sutton has outside leverage against Edelman in the slot (hat outside Edelman’s hat). The Pats wideout uses a stretch release, taking a hard inside jab step to move Sutton inside and off his spot, before crossing over outside to run his out route. Also, notice how Edelman fights fire with fire, negating Sutton’s contact at the top of his stem by initiating contact himself and running through the jam. Edelman’s physicality in his routes is often something opponents point out as a hallmark of his game.

Along with giving him a two-way go out of the slot, the Patriots will also play Edelman off the line (flanker or “Z” receiver) to get him free releases by motioning him right before the snap.

Former Patriots quarterback Tom Brady and Edelman beat the Kansas City Chiefs secondary like a drum in the 2018 AFC Championship Game with motion.

Here, the Patriots motion Edelman into a bunch with Phillip Dorsett and quickly snap the ball, giving the Chiefs little time to adjust their coverage to the new formation. As Edelman releases upfield, Dorsett gets a little piece of Kendall Fuller to get Edelman into his route. The key for Edelman on this play, aided by the free release, was how quickly Edelman gets upfield and into his route. The burst he had to get into the secondary in a flash made it impossible for Fuller to recover once he was initially beat at the line of scrimmage.

There are countless other routes we could show that exemplify how surgical and sudden Edelman is as a route runner, leaving NFL defensive backs in the dust.

Attacks leverage by stemming at JN outside arm. JN opens to sideline, Edelman breaks inside into blind spot. Sells inside break with head/hips, gets JN to commit, breaks back out. Makes a great catch. #Patriots pic.twitter.com/XLeJWTW6Wr

Edelman route running time: this week it's a rare vertical double move by Edelman to split a double team.

Gets both DBs to backpedal by charging hard off the line while keeping shoulder pads low, foot fire and sink hips to sell break, ope its a stutter-and-go. #Patriots pic.twitter.com/GVeiVFJVXR

There’s also him sticking two Giants defensive backs tasked with bracketing the Pats wideout in a freeze-frame by giving them a little stutter-and-go move to win over the top.

Whether you’re a fan of the Patriots or not, there’s no denying that Edelman is one of the premier route runners in the NFL and a constant in the slot for New England’s offense.

Currently, Edelman is a plus-8000 long shot to take home Offensive Player of the Year honors in 2019 and also has little chance in leading the league in receiving yards (+5000).

Although there’s optimism surrounding second-year wide receiver N’Keal Harry and others, Edelman once again will be the top dog in the Patriots passing game for another season.

The Tom Brady era might be over in New England, but the GOAT left behind one of his own, as Edelman now takes the mantle as the most recognizable face of the franchise.