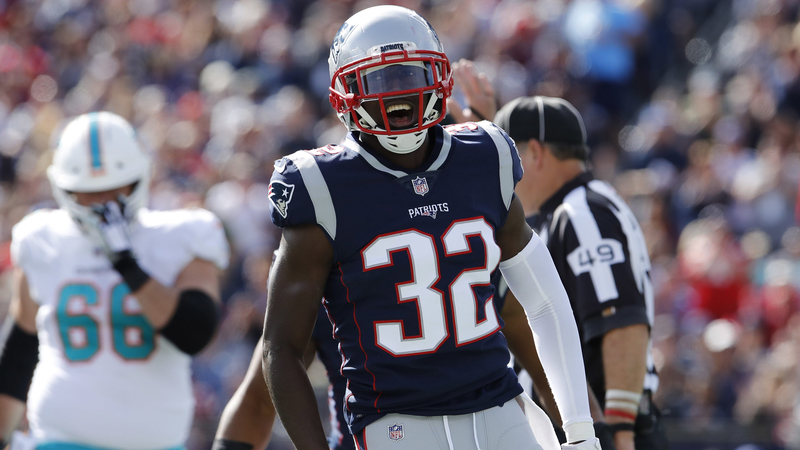 Patriots captain Devin McCourty was named the 2020 Uncornered Champion of the Year for his work off the field with Boston Uncornered.

Boston Uncornered is an organization that aims to end generational urban poverty by engaging with gang-involved individuals. McCourty is one of their biggest supporters, and his community work extends beyond the Boston area as he leads the fight against racial injustice in our country.

Patriots teammate Matthew Slater joined the video conference to congratulate McCourty, calling him the “unquestioned leader of our football team” during the live stream event.

Slater’s statement in the wake of Tom Brady’s departure to Tampa Bay put into perspective what the Pats safety means to the organization.

Devin McCourty gave a 🔥🔥🔥 pregame speech for the @Patriots before facing the Chargerspic.twitter.com/Mt0N7UkOk7

The former first-round pick’s words hold as much weight as anyone in New England’s locker room, and his play on the field continues to place him in the elite tier of players at his position.

Based on Pro Football Focus’s wins above replacement metric, McCourty was the sixth-most valuable safety in the NFL last season and was the second-most valuable defender on the Patriots defense behind reigning Defensive Player of the Year, Stephon Gilmore.

Along with fellow veteran Patrick Chung, Patriots head coach Bill Belichick moves McCourty around the defensive backfield each week to create an optimal game plan for his defense.

The Pats captain played almost as many snaps in the box or slot (441) as he did at his usual free safety spot (467) in 2019, as his high football IQ and athletic profile make him a perfect Belichick chess piece.

Still, McCourty’s primary role is playing the deep middle as a ball-hawking center fielder who is vital to New England’s execution of divider rules in man coverage. The Pats are the premier man coverage team in the NFL, and the primary way they do that is by having their corners funnel receivers inside to McCourty, who is either in the deep middle or serving as a robber.

With divider rules, the Pats cornerbacks will funnel inside releases to their safety help by playing a trail technique with outside leverage, allowing them to mirror breaks and jump underneath routes while the safety behind them protects against deep passes.

Here, the Patriots use divider principles with McCourty on the left hash. Other teams know the Pats corner will play trail technique out of these looks, so the Steelers try to attack a weak point in the coverage with a post-corner route. As the play rolls, you’ll see Jason McCourty take his position outside and underneath the receiver, leaving an open passing window over the top. However, brother Devin comes streaking across from the opposite hash to make this a difficult throw for Ben Roethlisberger and nearly intercepts the pass.

Belichick usually keeps McCourty in the middle of the field to eliminate deep passes, the Pats had the best DVOA in the league on throws of at least 15 yards, but then comes the shuffling.

McCourty is one of the smartest players in the league that seems to climb inside the minds of opposing quarterbacks with his understanding of route combinations and where the quarterback wants to go with the ball.

In recent seasons, the Patriots are among the league leaders in cover-zero blitzes, but they’ll also show blitz and back off to confuse opponents.

I have such an affinity for players who goes into the weeds with their thinking-from a QB viewpoint that’s exactly what @McCourtyTwins did here-totally mind dunked the QB-it’s why he will go down as an all-time @Patriots THIS IS HARD ON A QB!! @MikeGiardi @MikeReiss @patspulpit pic.twitter.com/iyZssX2Oaw

In this excellent breakdown by former NFL quarterback Dan Orlovsky, the ESPN analyst explains what makes McCourty one of the smartest players in the league. During Dak Prescott’s pre-snap cadence, McCourty is thinking like the Cowboys quarterback and knows if he blitzes that Prescott will throw “hot” to the single receiver side. Instead of blitzing, McCourty bluffs the blitz and drops into Prescott’s passing lane to force a sack.

Here’s another example of McCourty’s intuitiveness getting the best of a young quarterback. On the play, the Patriots fall off into a cover-two structure with two deep safeties. Bills quarterback Josh Allen thinks he has a post route splitting the two safeties, but after giving a peak to the receiver on his side of the field, who breaks off his route, McCourty rallies back by reading Allen’s eyes to the deep middle to intercept the pass.

McCourty’s experience as a cornerback early on in his career also translates to a 44.4 passer rating into his man coverage, sixth among safeties, per Pro Football Focus.

On this interception, the Patriots bring a zero blitz at Jets quarterback Sam Darnold. Knowing the blitz is coming, McCourty, who is flexed out on running back Le’Veon Bell, knows the ball needs to come out quickly to a “hot” receiver. The end result? Another interception, as McCourty jumps Bell’s route and would’ve taken it back for six if it wasn’t for a little bobble.

According to our exclusive partners at BetOnline.ag, McCourty is a nice deep sleeper for Defensive Player of the Year in 2020 as a plus-15000 long shot to take home the award.

The 11-year veteran is in the enlightened phase of his career, where he still has enough physical tools to run with NFL pass-catchers and combines that with coach-like knowledge of the game.

McCourty is the key communicator in the Patriots secondary, making coverage calls and checks before the snap to get everyone on the same page and in a position to succeed.

The unquestioned leader in the locker room is on a Hall of Fame trajectory as an instrumental piece to three Super Bowl titles and three selections to the AP All-Pro second team.

Both on and off the field, Devin McCourty is a perfect Patriot.