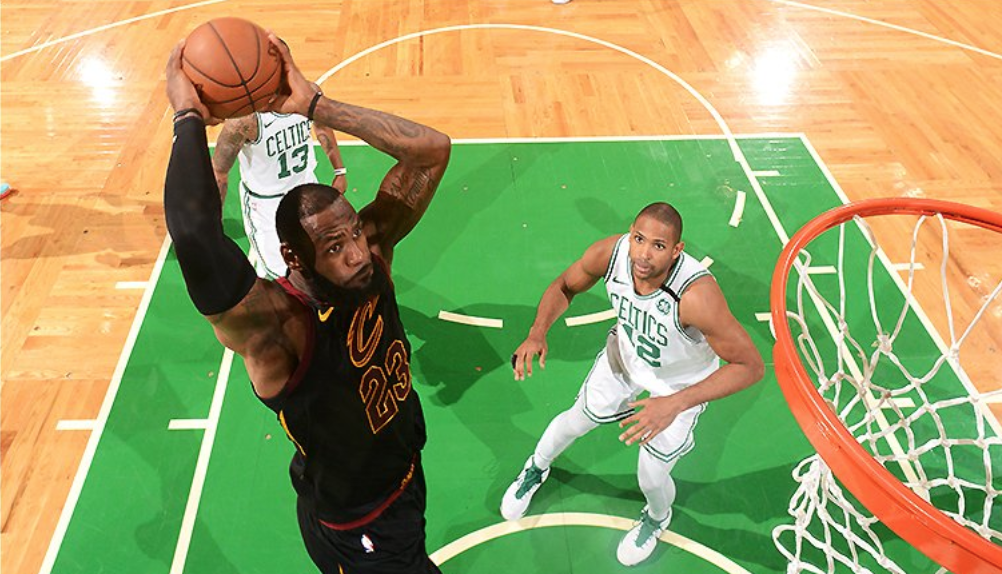 BOSTON — In a knockdown, drag out, ugly slugfest, it was LeBron James who had just enough to knock out the Celtics in Game 7 and end their title dreams.

With help from Jeff Green and key threes from JR Smith, James finished with 35 points, 15 rebounds and nine assists and advanced to his eighth straight NBA Finals with a 87-79 win over the Celtics at a thunderous TD Garden Sunday night. The Cavs will make their fourth straight NBA Finals appearance against the winner of Monday night’s Game 7 between the Rockets and Warriors in Houston.

For Boston, it marked a heartbreaking end to a season that saw incredible triumphs over adversity and the emergence of young superstars in the making in Jaylen Brown and Jayson Tatum. It also marked the first time the Celtics lost a Conference Finals Game 7 at home since 1982, when the Sixers prevailed, 120-106, and advanced to the NBA Finals. An appreciative crowd spend the last minute chanting “Let’s Go Celtics.”

LeBron James and Jayson Tatum shared a long embrace after the final buzzer. The Celtics were ice cold from 3-point range, going 7-for-39, as Jaylen Brown (2-for-11) and Terry Rozier (0-for-10) couldn’t find rhythm.

There were so many storylines that made this Game 7 feel all the more dramatic. The Celtics, a perfect 10-0 at home in these playoffs heading into Sunday night, had never dropped a series when leading 2-0, winning their previous 37 such series and were looking to return to the NBA Finals for a chance to win their record 18th NBA title.

LeBron James, playing perhaps his final postseason with his hometown Cavs, was aiming for his eighth consecutive trip to the NBA Finals and ninth overall. The Cavaliers are facing the end of an era and were looking at reaching the Finals for a fourth consecutive season.

With Paul Pierce sitting courtside next to Patriots owner Robert Kraft and Celtics owner Wyc Grousbeck, the current edition Celtics made Pierce proud with their effort. The Celtics came out firing behind Jayson Tatum. Their super rookie had nine points in the opening quarter as the Celtics raced out to leads of 6-0 and 11-4 lead in the opening minutes.

But James came as advertised in Game 7. He had 12 of Cleveland’s first 16 points and converted a three-point play to give the Cavaliers their first lead at 16-15.

But the Celtics, pressuring the ball and playing better fundamental defense, responded with a late run of their own, scoring the final nine points of the first quarter to take a 26-18 lead into the second quarter.

A Rozier-to-Horford alley oop dunk in the first minute of the second quarter capped the 11-0 run and put the Celtics in command, 28-18.

Al to the basket! pic.twitter.com/3IBMOcetfO

The Celtics play nearly flawless basketball for the first 17 minutes, not committing a turnover until a shot clock violation with 7:20 left in the second quarter. The Celtics had a 35-23 and then went ice cold, scoring just two points in a five-minute span. Horford and Tatum started the game going 10-for-15. The rest of the Celtics combined to shoot just 6-for-25. The Cavs were in a similar predicament. James, who had 17 points and 10 rebounds in the first half, opened the game 5-for-10 while the rest of his teammates were just 3-for-15.

Tatum flies in for the jam! ? pic.twitter.com/eCtQZVeRSU

With 2:53 remaining in the half, JR Smith’s corner three made it a two-point game, 37-35, before Horford answered with a dunk on the ensuing possession. The Cavaliers had a chance at the lead and appeared to take it 41-40 on a James layup but Marcus Smart drew his second offensive foul on James and the basket was wiped out. Jaylen Brown came down and drained a three to make it 43-39. Brown had another wide-open look at a three with five seconds left in the half but it was short and the Celtics had to settle for a four-point lead going to the break.

The second half started with Tatum fouling JR Smith on a three just 15 seconds in. Smith hit two of them to make it 43-41. The Celtics were able to build the lead back to six, 47-41, but the cold shooting continued. Smith wide-open three with 7:21 left in the third cut it to 47-44 and prompted a Stevens timeout. A turnover led to a Jeff Green layup in transition with 6:43 left. His free throw tied the game, 47-47. But Tatum came back with a fallaway jumper to give the Celtics the lead again.

Green’s corner three with 4:53 left put Cleveland up, 53-51. LeBron found Tristan Thompson with an alley oop and it was 55-51 Cleveland. A Marcus Smart offensive rebound and put-back stopped Cleveland’s 9-0 run and made it 56-53 Cavaliers. Baynes then hit 3-of-4 free throws on the next two possessions and the game was tied, 56-56.

James connected on a three with 36.5 seconds left and Smart missed a three. James missed a three at the end of the third and the Cavaliers led, 59-56, going to the fourth.

The Celtics opened on fire in the quarter. Tatum hit a bank shot and then Marcus Smart found Horford on a spectacular alley-oop slam and foul. The sensational play put the Celtics 61-59 with 11:24 left. James drove for a layup to tie it. Smart hit a three and then Smith answered and it was tied, 64-64.

Kyle Korver drained a three at the top of the circle for a 67-64 lead before Tatum answered with two free throws. James appeared to throw the ball away on an inbounds play but the ball bounced into his hands and his drained the shot with 8:52 left for a 69-66 Cleveland lead.

With 6:04 left, Jayson Tatum hit a three to give the Celtics a 72-71 lead. It was Jeff Green who answered right back with a three of his own and it was 74-72. Smart missed a three and Tristan Thompson drove the lane for a dunk and a 76-72 lead.

With 3:47 left, James picked up his fourth foul. But he responded with two free throws with just under three minutes left to increase Cleveland’s lead to 78-73. The Celtics got two offensive rebounds but Marcus Morris and Terry Rozier missed open looks at threes and James picked up the rebound.