LeBron James Out of Gas and Almost Out of Time 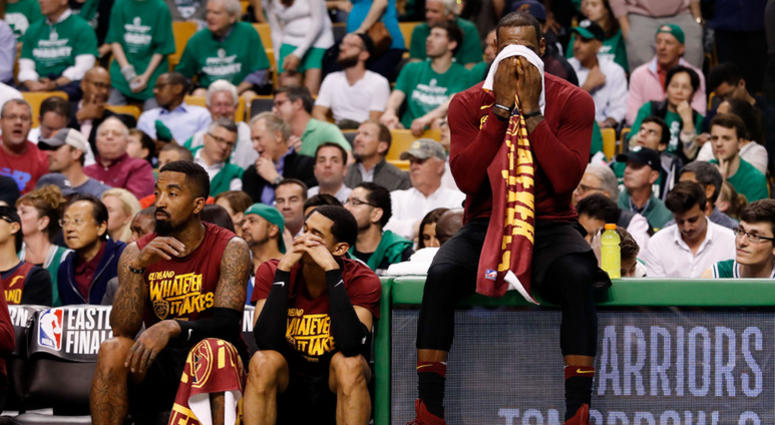 BOSTON — LeBron James has a lot of reasons to be tired. It’s just strange to see him show it.

King James looked positively gassed throughout Game 5 of the Eastern Conference Finals, a game won rather easily by the Celtics 96-83.

Saying LeBron looks cooked may sound like excuse making but its true nonetheless. A simple byproduct of an insane amount of basketball he’s played this year and throughout his career. He’s 33 years old in his 15th professional season. He’s gone to 7 straight finals. This season he played in all 82 of his team’s regular season games logging more minutes than any other player in the league. And on Wednesday night it looked like it all finally caught up with him.

“I had my moments, but I think everyone at this point is tired, worn down, whatever the case may be,” James said after the game. “I’m still trying to make plays and help our team win, put us in position to win. We had moments, we had an opportunity and we didn’t make enough plays.”

James certainly didn’t have a bad game. Pedestrian by his standards but still he poured in a team-high 26 points on 11-for-22 shooting with 10 rebounds, five assists and a steal (plus 6 turnovers) in 39 minutes.

Lue also said LeBron "wasn't ready" to come out to start the 4th.

But it just wasn’t the same LeBron from the last 3 games. He was heaving and panting in between plays, his face buried in a towel on the bench during the few precious moments he was afforded to catch his breath. He showed aggression only in spurts and seemed at times to be coasting, beaten to loose balls, not challenging defenders or attacking the rim with his trademark ferocity. And his fatigue did not go unnoticed on the Celtics sideline.

“Yeah, I seen it,” said Celtics forward Marcus Morris. “We threw a lot of different bodies at him. He has to do a lot for that team, obviously everybody knows. These games are coming up pretty quick. Games are coming fast. At the end of the day, s–t, I’m tired, everybody else is tired.”

Perhaps there’s a mental component to James’ fatigue as well, having to carry a less than stellar Cavs team on his back all season and through round after round of the playoffs. On Wednesday, outside of him and Kevin Love the rest of his teammates combined to shoot just 14-for-39 (.358) from the field. Or maybe it’s that James has just been worn down by a younger, more athletic, energetic, and possibly just hungrier Celtics team.

“They can play all day,” Morris said describing his younger teammates “They continue to play. They’ve been playing 40, 39 minutes each and every game and it doesn’t seem like they’re slowing down. They’re playing at such a high level. It’s like playing pickup, they don’t even have to stretch. They just go in there and get it done.”

Despite how he looked on Wednesday it would be foolish to expect James to mail it in when the series shifts back to Cleveland for Game 6. But if he’s too tired and would like to begin an offseason of rest, relaxation and contemplation about the next stop in his basketball odyssey, I’m sure the Celtics would be more than happy to oblige him.