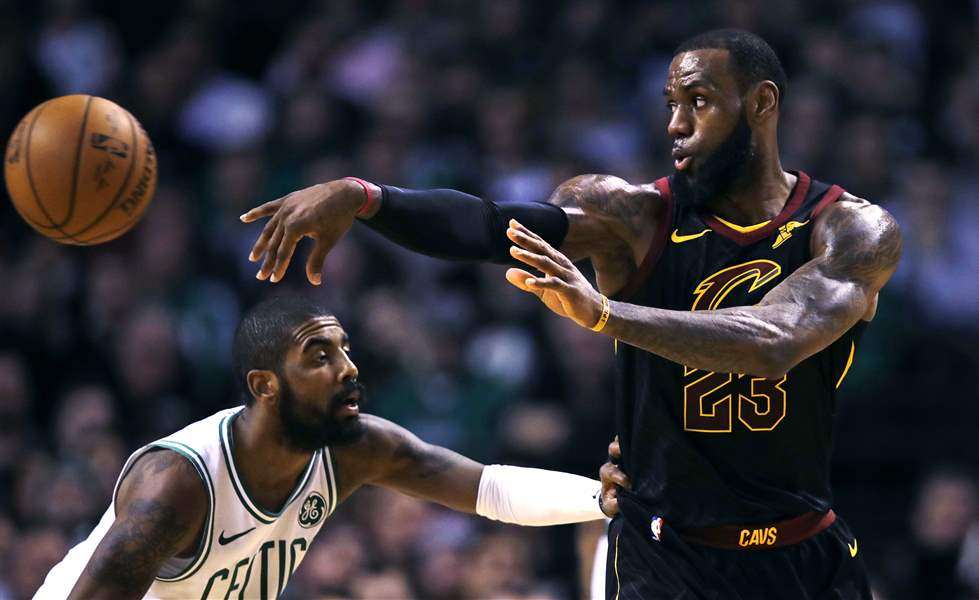 Moments after tip-off between the Celtics and Cavaliers Wednesday night, the focus shifted from Isaiah Thomas returning to Boston to LeBron James and Kyrie Irving battling against each other for the first time on the parquet at TD Garden.

James’ 16 first-half points appeared to be the making of another explosive night, while Irving was expected to go into takeover mode in the second half — just like he’s done so many times before — until Irving’s teammates Terry Rozier and Jayson Tatum stole the show.

Rozier’s game-high 20 points led his team in a 102-88 win over the Cavaliers, in a game where James rode the bench throughout the final frame while the Celtics kept their opponent at bay. James was the difference-maker in keeping his team relatively close throughout the first three quarters, yet, when he wasn’t getting enough help from his teammates, he become a spectator while his team saw their deficit grow towards the end of the fourth quarter.

Cleveland was on the second night of a back-to-back, meaning fatigue certainly played a factor in their performance. However, Tyronn Lue’s lackadaisical approach against the team with best record in the Eastern Conference is proof that the Cavaliers may not take the Celtics as seriously as they should.

James’ front court mates — Kevin Love and Jae Crowder — were scoreless (0-of-10) at halftime and combined for only 8 points by the end of it but when the Cavaliers trimmed what was nearly a 20-point hole down to 15 with 7:22 left to play, James stayed on the bench. The Celtics’ defense was no-question a major factor and should be a cause for concern for the Cavs.

It wasn’t a case of the Celtics coercing the Cavaliers into committing a lot of turnovers (14), but rather the manner in which they rattled Cleveland’s offense. And on the other end, Cleveland had a hard time defending the Celtics in transition, specifically, Tatum and Jaylen Brown.

They combined for 29 points Wednesday. Still, the loss didn’t phase James, who told reporters after the game that while he does see Boston as a threat in the east, the Celtics simply brought their A-game Wednesday night and that his team is still trying to find its identity as they start to ease Thomas into their rotation.

“I don’t know who we are or what we can be until we get I.T. back consistently,” James said. “But we know what the program is, so it’s not like a surprise he wasn’t playing tonight. We already know he won’t play in the Indiana game after we’re in Toronto. He’s not playing back-to-backs right now.

“You know, we were playing well and Tristian (Thompson) comes back; we integrate him. We haven’t played as well as of late, so we’re trying to figure that out, as well.

Facing their first double-digit deficit heading into the second quarter, the Cavaliers shot 29.2 percent from the floor and by halftime could only cut it down eight (55-47). James’ 16 points was the only bright spot of the half for Cleveland, probably the only reason his team was still in it aside from Kyle Korver’s four triples.

Instead, James and Lue watched the Celtics go off on a 10-2 run that was fueled by eight consecutive points from Rozier — which led to a 23-point deficit. The win pushed the Celtics to an impressive 31-10 conference-leading record.

Clearly, the Cavs aren’t worried about dropping a game against the Celtics, nor do they have their eyes locked on the standings, something coach Lue addressed after the game when asked about Boston’s 4.5 game-lead over Cleveland.

“It doesn’t concern me,” Lue said. “As long as we make the playoffs, we’re fine.”

Come April or May, we’ll have a better idea of just how serious of a threat the Celtics will be to Cleveland as these two teams seem destined to meet in the post season. In the meantime, the Celtics are midway through their 82-game schedule and look stronger than ever.

They will look to hold onto the top spot in the east while showing no signs of slowing down.