Led By Grounded Stars ‘Without Any Ego’, That Winning Vibe Starting To Build With These Bengals

Joe Burrow: "They celebrate each other's success... We have three No. 1 receivers without any ego" 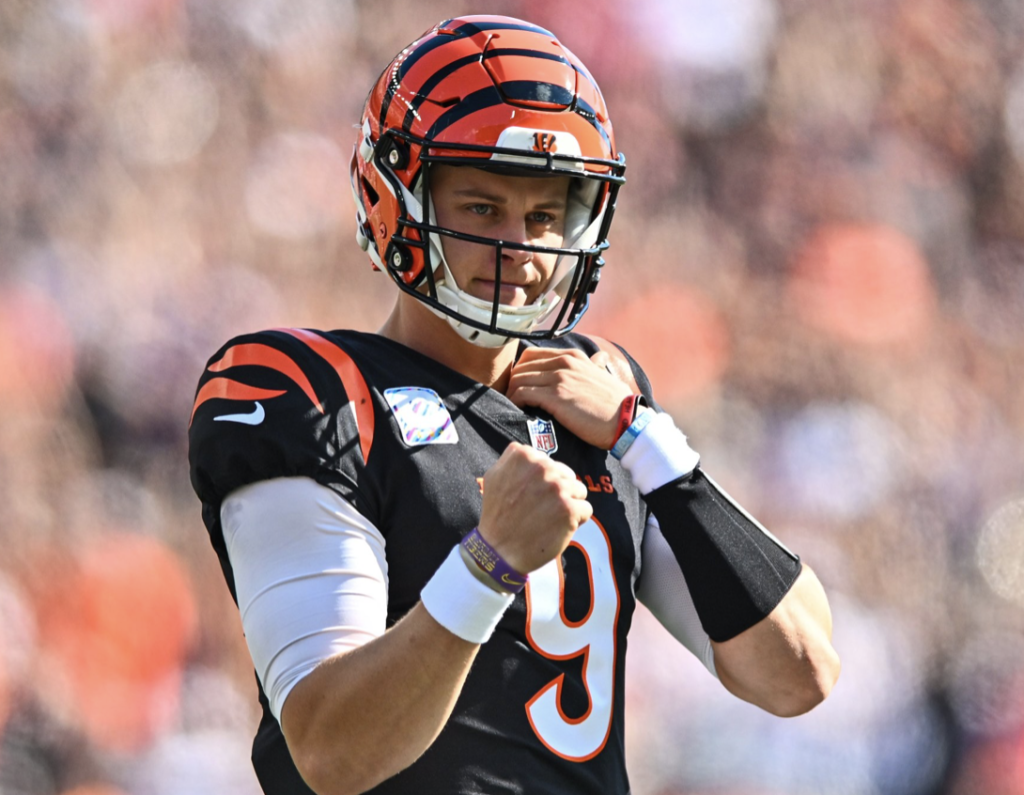 CINCINNATI — There’s a feel winning teams have. And Sunday, that feel was palpable from Joe Burrow’s air strike to a wide open Tyler Boyd streaking down the field for a 60-yard touchdown to the postgame locker room vibe.

The feel is pervasive. You can sense it from the music playing to the smiles on the faces to the jokes on each other. It was all around the Bengals locker room following Sunday’s 35-17 coast past the Falcons at a sold-out Paycor Stadium on a perfect fall afternoon.

After the game, there were so many examples of this personality of this team coming out.

The three amigos – Tyler Boyd, Ja’Marr Chase and Tee Higgins – all talking about how much fun it is playing with a quarterback that just threw for 481 yards and three touchdowns. Boyd set a career high with 155 yards on eight catches. Chase had eight catches for 130 and two touchdowns. And Higgins. Poor Tee Higgins, if only he had stayed in bounds on one catch, he would’ve joined the century club Sunday, falling seven yards shy.

There was assistant offensive coordinator and starting center Ted Karras getting invited to Joe Burrow’s Saturday night quarterback meeting and getting to call a play on the opening drive. Just so happened to be the 60-yard bomb.

“The shot early in the game. That was one we were locked in on early,” head coach Zac Taylor said. “Ted Karras last night was a guest in the quarterback meeting room and he picked that as the first touchdown of the game, so credit to him for having that foresight. That’s just further what our offensive linemen understand about this offense. They hear us talk, they hear stuff in the pass game that really they have no concern about, but really they’re just that aware about how the game is going to be played out, and it’s pretty fun for me to see as a play caller.”

“I got to join. They invited me to be a guest,” Karras said. “They all pick a play to be the first score of the game and I picked that one. I’m glad it came to fruition. Zac had highlighted it earlier in the week and I liked the sound of the name. We had hit it in practice a few times. I was glad to hear it in (the meeting).”

Everyone is loose when you win. The Bengals objective is to stay that way with consistency up front on the offensive line, where good plays lead to good drives lead to scores lead to wins. It’s a repetition Burrow knows is really the key to success.

“Consistency is the next step. Every single game we’ve had spots where we’re really good, and it’s about sustaining it over a whole game,” Burrow told me. “We have to string together games like that. We’ve done that for two weeks and we have to keep doing it.”

But for one day, the Bengals can savor how Burrow was able to spread the ball to his incredible wealth of receivers and tight end Hayden Hurst, who had six catches for 48 yards, including a pair of first down catches.

“That’s what’s so great about those guys. They’re just as excited to see Tee score as they are Ja’Marr or Tyler as much as Tee,” Burrow said. “They celebrate each other’s success. That’s what makes us so unique; we have three number one receivers without any ego. They trust me to do my job and throw the ball where it’s supposed to go. They’re really a pleasure to be around every week.”

And here’s what the receivers appreciate about Burrow: His personality doesn’t fluctuate in good times or bad. He’s got swagger but it’s in complete control. It’s the perfect blend when your quarterback is your best player and best leader.

“Yeah, he’s got so many nicknames,” Boyd said. “He’s just a swagger guy that’s going to keep this train going. Just be yourself. Don’t be a cocky guy, don’t be a guy trying to do too much or (consume) yourself with the hype. He’s (just) a real cool guy, once you get to know him. All the outside stuff never gets into his head. He just plays level-headed.”

Another “lights out” compliment for offensive line from Joe Burrow Bengals pic.twitter.com/joe5wt8hxg

It was easy to criticize the Bengals and their woebegone offense over the first two games and the 0-2 start. Even in the two wins over the Jets and Dolphins, they didn’t quite look themselves, putting up 27 points each time but doing just enough to win.

But after the first quarter in New Orleans, Burrow felt a significant shift in momentum. Zac Taylor said it was a matter of getting back to basics in the passing game.

“Just mixing in more bread and butter stuff that’s really been efficient for us the last couple weeks, not overcomplicating it,” Taylor said. “Some good scheme stuff that we like that we’ve maybe dialed up against the pass. We’re just saying, ‘Let’s get back to the things that are tried and true in our system.’ It doesn’t mean that we score on a scheme play on the fifth play of the game or whatever it was, but it’s just things that guys know well and can operate with extreme confidence.”

Think of the irony. The Bengals air attack is starting to take flight because its stars are so grounded. But that’s precisely why Bengals fans should be filled with hope and great expectations for this 2022 unit.

The unit that was pressing in the first four weeks basically because its quarterback didn’t have the time or the confidence to stand in the pocket and make the vertical throws downfield now looks like the one that everyone was expecting heading into the season.

Yes, it’s night and day from Week 2 but even then, Zac Taylor and leaders in the locker room are quick to point out that there was never any panic.

“I hope you all listened to me when I got up here at 0-2 and said, ‘Just be patient, this season is very young, we know what type of team we have, I know the faith that I have in these players and coaches.’ And that’s what they’ve done,” Taylor said as his team sits tied with Baltimore at 4-3 atop the AFC North. “This season is still in its infancy stages. Today gave us a chance to separate a little bit, and that’s what we need, but we know what’s on task next week: Monday Night Football at Cleveland — that’s a big game for us. Guys will be amped up and ready to go. It gives us an extra day to get healthy, and our guys are ready for the challenge.”

And yes, there’s still so much work left to do. But the vibe after Sunday’s win was one that spoke to this team’s collective confidence that it’s finally headed on the right path toward its ultimate goal.