‘Legend of the (Tacko) Fall’ Continues to Grow 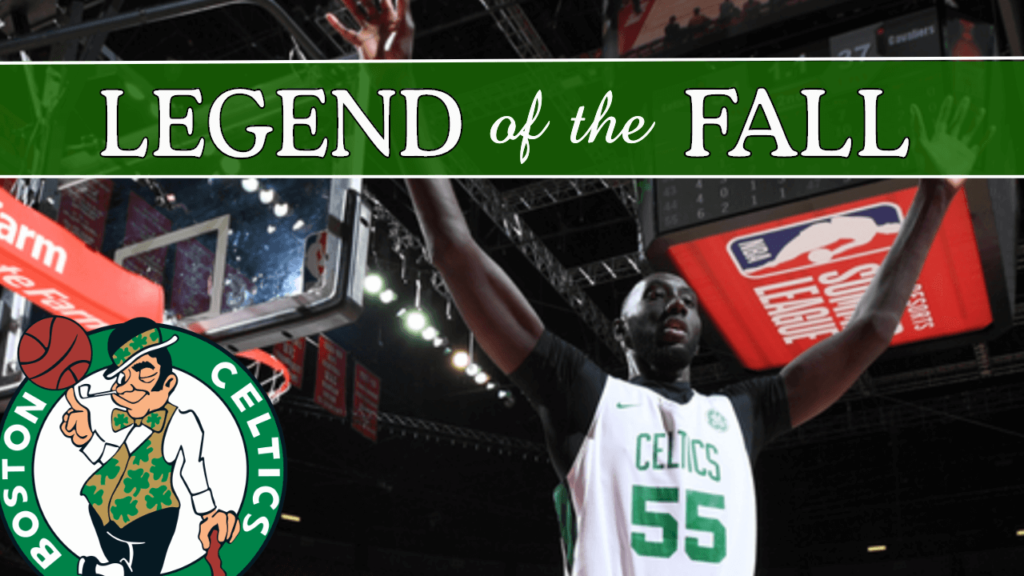 There’s no shortage of things to do in Las Vegas. Shoot some dice, dine at a nice restaurant, check out a show. But right now the number one ticket in town isn’t at the Bellagio or Caesar’s but instead at the Thomas Mack Center where you can see the  incomparable, the unfathomable, the unstoppable, 7′ 7″ inch spectacle that is Tacko Fall.

Tacko Fall may be the most beloved summer leaguer of all time. He's a legend out here.

Tacko Fall is the most exciting player in summer league history.

Fans roar in anticipation as he approaches the scorer’s table to enter the game. They boo viciously when he gets subbed out. They cheer deliriously every time he blocks a shot or throws down a jam and lands with his hand still holding onto the rim.

Tacko Fall keeps it high for the @celtics throw-down! #NBASummer

“I feel blessed,” Fall told NBA TV reporter Stephanie Ready. “I hear the noise, I hear everybody cheering for me. It means a lot.”

But Fall is more than just a freakishly tall sideshow. He has impressed with his overall play so far. On Tuesday against the Cleveland Cavaliers Summer squad Fall finished with 12 points, 2 rebounds, a steal, and a blocked shot while contesting countless others.

“It’s been a great experience so far,” Fall said. “Every game I feel like I have something to prove, that I can play in the NBA. That’s where my mind is at. Ever since I got to Boston, they really try to keep me up to speed with everything and here being able to compete with some of these guys is a confidence boost.”

“I didn’t want Tacko to get too wrapped up [in the crowd]” added Celtics assistant and Summer League coach Scott Morrison. “But that was a moot point. He’s used to getting a lot of attention. He’s handled it like a pro so far.”

Fall’s teammates have also taken notice and taken advantage of Fall’s god given advantage over pretty much everyone else on the court at any given time.

“Obviously he has the highest reach, but there’s still dudes climbing on his back and trying to claw for the ball,” Morrison said. “His ability to just catch it not travel, gather himself and go up or just reach up was impressive today.”

Beyond being just tall, Fall has shown surprising foot speed and some touch around the rim, dropping in a deft hook shot on Monday night in his 11 minutes of action. He also went 2-for-2 from the free throw line, something he struggled with in college.

All this bodes well for a man who at 7′ 7” inches tall has been trying all his life to find his place in a sub 6 foot world and right now, a spot on the Celtics regular season roster. Something Scott Morrison doesn’t believe is beyond the realm of possibility.

“In theory, worst-case scenario, he’s a specialty player you put in for situations and certain matchups,” said Morrison. “And then on the upside, I think he can be a pretty solid, serviceable big man who’s going to give you some bonus stuff around the rim in terms of protecting the hoop and every now and then bailing you out of a bad possession, just by being able to catch it high in the middle of the paint.”

Specialty? Maybe. Special, no doubt. And right now the number one attraction in Las Vegas.

If you missed the first couple shows you have another chance to see the astounding Tacko Fall on Tuesday night when the Celtics take on the Denver Nuggets.

Come one, come all.