Len Ceglarski, Hall of Famer and Boston College Hockey Legend, Passes Away at 91 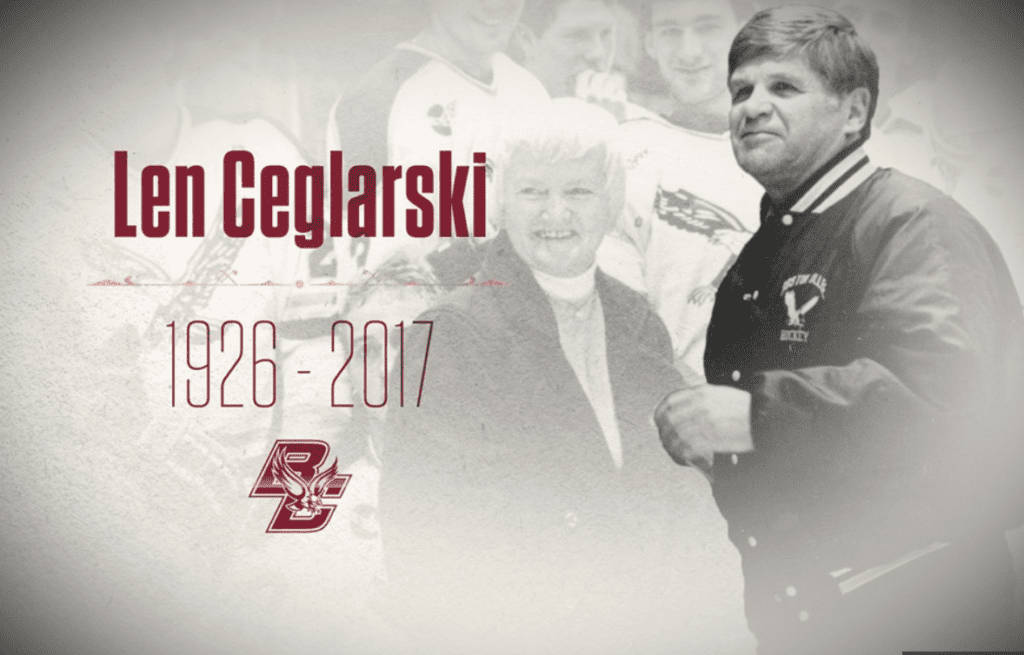 CHESTNUT HILL — Before the legendary Jerry York, there was hall of famer Len Ceglarski.

Ceglarski, the legendary Boston College winner of 419 games as head coach at Boston College and member of the 1949 national championship team died Saturday. He was 91.

Ceglarski is the ninth-winningest coach in NCAA college hockey history, having amassed a career record of 673-339-38 (.659).

The East Walpole, Mass. native started his coaching career at Clarkson University in 1958 before taking over for his alma mater in 1972. In 14 seasons at Clarkson, Ceglarski finished with a 254-97-10 (.718) record and guided the Golden Knights to four NCAA Tournament berths and their first ECAC Tournament title. Ceglarski also guided Clarkson to three national championship games in 1962, 1966 and 1970.

Boston College’s former skipper claimed the Eagles’ head coaching position at the start of the 1972-73 season, taking over for John “Snooks” Kelley. Ceglarski went on to post an overall record of 419-272-27 (.602) in 20 seasons as head coach at Boston College.

When Coach Ceglarski retired at the end of the 1991-92 season, he left the game as the winningest coach in the game. He is currently ninth on the all-time list and is BC’s third winningest coach behind Snooks Kelley (501) and current head coach Jerry York (575).

Upon retirement, Ceglarski joined an elite group when he was inducted into the U.S. Hockey Hall of Fame in Eveleth, Minn.

The Boston College Varsity Hall of Fame member (1974) was an All-America hockey player who helped the program capture its first national title in 1949. He was Boston College’s captain as a senior in 1950-51. Ceglarski was also a standout second base man for Boston College’s baseball program.

Known as a gentleman of the game, Hockey East commissioner Stu Haskell announced the league would name its sportsmanship award after Ceglarski in 1992.

In 1990, Ceglarski won the Lester Patrick Trophy, an annual award presented for outstanding service to hockey in the United States. He also collected three Spencer Penrose Trophies in 1965-66, 1972-73 and 1984-85, given to the national coach of the year.

Ceglarski was also a member of the U.S. Olympic hockey team that won the silver medal at the 1952 Winter Olympic Games in Oslo, Norway.

The school is planning to release details on arrangements shortly.