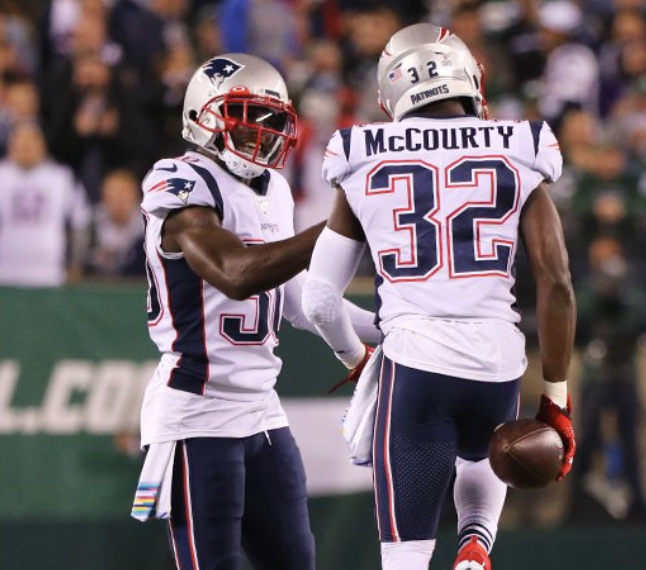 EAST RUTHERFORD, N.J. – Through seven games of this 2019 NFL season, the Patriots are statistically the best defense in the Super Bowl era.

And it’s not close.

With its defense on the field, the Patriots have allowed just 27 points this season. Go back to Super Bowl LIII in Atlanta and they’ve allowed just 30 points through eight games. They recorded their second shutout of the season Monday night, 33-0, over the overmatched Sam Darnold and the Jets. They are a field goal allowed on Opening Night from a third.

For some perspective, the 2000 Baltimore Ravens allowed 141 points through 16 regular season games. The Patriots are on pace for just over 60. Devin McCourty had one of four interceptions Monday night and has five for the season, on a team that leads the NFL with 18. These are historic numbers. McCourty was asked if the stats ever cross his mind.

“No, I think we’re getting a blueprint of what it takes each week to come out and play well,” Devin McCourty said. “I’ve been part of teams where we play well and then we haven’t played well. That’s because we haven’t followed that blueprint. We will get over this one fast because we have a Cleveland team that is coming off a bye week that is going to try and come into Foxboro and get a big win on the road.”

This is what makes this Patriots team so amazingly consistent. They have a laser focus that is unmatched in the modern era of the NFL. It’s unmatched for his level of consistency no matter the opposition. This Patriots defense never plays down to its competition. They destroy it.

We’re only through seven regular season games but these Patriots are starting to earn a place in the conversation with the 75-76 Steelers, the ’84 Niners, the ’85 Bears, the ’86 Giants, the 2000 Ravens and the ’02 Buccaneers.

On Monday night, Darnold was chewed up and spit out like never before in his brief career. It was so bad that ESPN microphones caught him saying “They’re making me see ghosts.”

How appropriate. The defense led by the Boogeymen making the opposing quarterback see things that weren’t there.

It was Darnold who earlier in the week suggested that there were opportunities to be had against the Patriots defense and their secondary. He and the Jets just had to find them. Well, Monday night, they failed in a most abysmal fashion.

Darnold completed just 11 of 32 passes for 86 yards, four interceptions and a horrific 3.6 passer rating. It was the lowest of his two-year career, spanning 16 starts.

The Patriots did two things they have been doing extraordinarily well all season on defense: Getting off the field on third down and turning opponents over, especially in the red zone. Monday night, Duron Harmon and J.C. Jackson picked off passes in the end zone, keeping the shutout intact. The Jets were 0-for-5 in the red zone against the Patriots Monday night.

“I think Duron and Devin and (Terrence) Brooks when he was in there, that those guys do a really good job of disguising the coverages,” Patriots coach Bill Belichick told me. “Jason (McCourty), Jon Jones, Steph (Stephon Gilmore), J.C. Jackson, the secondary works very hard at that, at disguising and moving around, being in different spots, doing the same thing from different places and so forth. They take a lot of pride in that. They’re very good at it. Depends on the offensive look, they can adapt their disguise to try to fit the look, so they do a real good job at that.”

“It’s been all year. We talk about being aggressive, we talk about trying to make our own plays defensively and not just sitting back and waiting,” McCourty added. “Those guys do a good job of it. I think it’s our overall understanding of the defense. At times, it can be a safety, it can be one of the backs or one of the linemen. Understanding that it can keep switching. That makes it tough on teams. We just have to keep doing those things. (We) understand now, seven games in, teams have more film on us. They’re going to design things (that are) different. We have to be ready to adjust; we have to be ready to continue to be versatile with our personnel and still try to make plays.”

McCourty said it was just a matter of following the blueprint of what the coaching staff has been laying out in practice each week.

“To me, that’s what it’s about. It’s about the blueprint of coming out each week, each day in practice, putting in the work, studying film and getting on the same page. We’re talking about adjustments right after the coin toss, (talking about) something that might come in a game. These guys are locked in. We have to keep doing it because for the rest of the season, we’re going to get every offense’s best shot. They’re going to be ready to go. We’re not a surprise anymore. We just have to keep being locked in.”

Cleveland’s Baker Mayfield may want to dress up for Halloween at Gillette because this Patriots defense, led by the Boogeymen, will be in full costume ready to go.