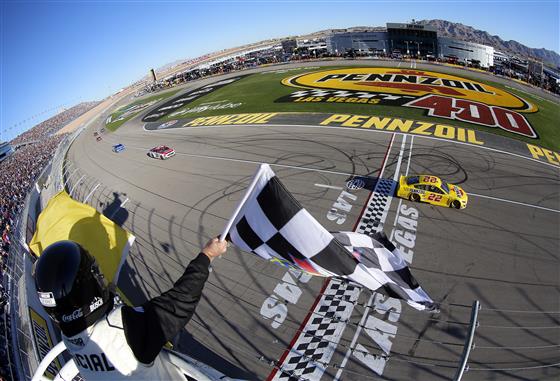 Joey Logano won the Pennzoil 400 from the Las Vegas Motor Speedway on Sunday afternoon to pick up his first win of the season.

Logano, who was in just his second race with new crew chief Paul Wolfe, used pit strategy to get to Victory Lane.

When a late caution came out with just five laps to go, Logano stayed out on track while most of the leaders pitted.  Logano was able to keep the lead on the final restart, and was leading when John Hunter Nemechek spun to bring out the caution that ended the race.

Logano said the call was a miscommunication between him and his new crew chief.

Logano used a push from Ricky Stenhouse Jr. to get to the lead on the final restart, and said that allowed him to use clean air to get the win.

“I watched him and he pushed me, and then he shoved me ahead which was great,” Logano said.  “That was the winning move.  Clean air was going to be king, especially on old tires…if I got swallowed up by a few cars I was going to go back real quick.”

DiBenedetto stayed out under the final caution to get track position, and he said his team worked hard throughout the day to get his car to where it needed to be.

“This whole team…we were covered, and it wasn’t pretty at the start,” DiBenedetto said.  “They did an excellent job.  So happy to be working with this team, the journey’s been pretty cool.”

“Tough to be that close, but this is only the second race of the season.”