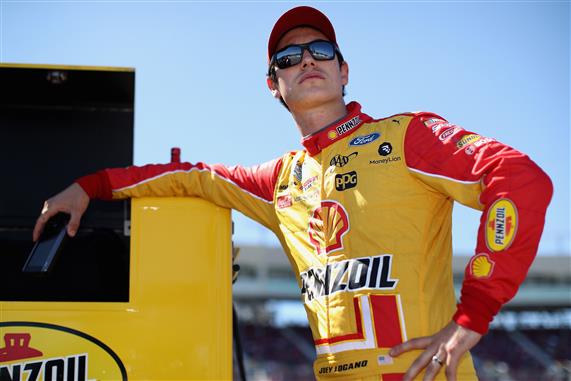 Logano had an eventful day that included a pit road penalty halfway through the race that forced him to work his way back through the field.  After getting to the lead, he was able to hold off challenges from Brad Keselowski, Kevin Harvick and Kyle Busch in the closing laps.

Logano said his car was strong enough to overcome the pit miscues early in the race.

“Boy, we had more things go wrong today,” Logano said.  “Unfortunate situation with the jack breaking…just had some good restarts to get ourselves back up there.  We had a really good car.”

Logano held off Harvick over two late-race restarts.  Harvick, who has been a consistent front-runner at Phoenix, was unable to get close enough to Logano in the closing laps to make a winning move.

Logano said he changed his driving style because he was expecting contact from Harvick.

“I knew racing Kevin was going to be hard there; figured I was going to get hit,” Logano said.  “I thought he was going to give me the bump-and-run, which I would expect and wouldn’t blame him for.”

Harvick said once he lost the lead he wasn’t able to control the race how he would have liked.

“Our Jimmy John’s Ford was better…we just didn’t get the control of the race and he was able to get by us on that restart where I got hung up.”