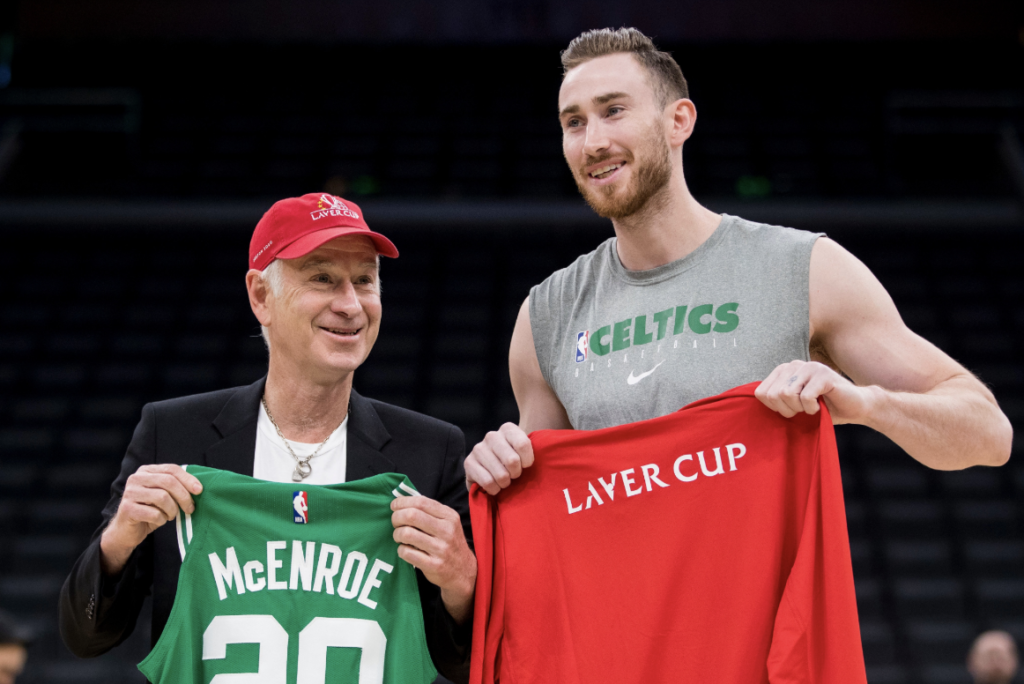 BOSTON – Tennis has never had a more enthusiastic and passionate advocate than John McEnroe.

Now, more than ever, tennis in America could use a bolt of energy from its No. 1 fan. That’s why he came to Boston this week to promote the ticket on sale for Laver Cup 2020, a unique tennis format where the best players from Europe take on the best from the rest of the World in a three-day competition between Sept. 25-27 at TD Garden.

“This has got so much history, the Boston Garden, it’s awesome even if that comes from someone from New York,” McEnroe told me Tuesday. “I don’t have to tell anyone here, this is a great sports town. The last 20 years we’ve looked at with a lot of envy down in New York because a lot of our teams have been struggling and everyone here seems to be kicking ass.”

The irony of that was rich coming from a lifelong Knicks and New York sports fan who sat courtside with Celtics owner Wyc Grousbeck during Tuesday’s loss to the Brooklyn Nets. Anything to promote the sport he loves more than any other.

McEnroe, a seven-time Grand Slam champion and captain of Team World, touched down in Boston on Tuesday to launch ticket sales this Friday morning. Tickets for the fourth edition of the unique team competition go on sale Friday at 10 am ET via Ticketmaster.

“The Laver Cup is coming and hopefully it would be nice to do something where we actually had a win,” said McEnroe, who calls Laver the sport’s Babe Ruth and his idol growing up playing tennis in Queens and Long Island. “This is a big year for me and, I’m assuming, the other players because when you can taste it, you want it bad.”

Laver Cup fast facts:
• The Laver Cup is a three-day tournament pitting a team of six of the best tennis players from Europe against six of their counterparts from the rest of the world.

• The tournament is named in honor of Australian tennis legend Rod Laver, the only man to win two calendar-year Grand Slams, and one of the greatest players of all time.

• The unique format of the Laver Cup showcases tennis superstars competing on the same team, playing singles, pairing up in doubles and cheering each other on from the sidelines.

· In September 2018, more than 90,000 fans attended the Laver Cup at the United Center in Chicago, where Team Europe once again edged out Team World to win the second Laver Cup 13-8.

· In 2019, Team Europe won the third edition of the Laver Cup clinching the trophy in a stunning deciding match in front of a sell-out crowd at Palexpo in Geneva, Switzerland.

· The location rotates between major cities in Europe and the rest of the world each year.

• In May 2019, organizers announced the Laver Cup would become an official part of the annual ATP Tour calendar.

• The Laver Cup is played indoors on a purpose-built ‘Laver Cup Black’ hard court, enhancing the viewing experience for fans both in the stadium and on the broadcast.

This generation’s greatest tennis rivalry is widely considered Roger Federer against Rafael Nadal. Theirs is a rivalry or quiet respect and intensity. Quiet is not exactly how you describe any rivalry McEnroe enjoyed from Bjorn Borg in the late 1970s and early 1980s, and Jimmy Connors and Ivan Lendl later in the decade as McEnroe rocketed to the top.

“There’s an intensity to their rivalries as well,” McEnroe told me. “They just approach it, perhaps in a different way. They seem to like each other a lot more than Connors and I did, or Lendl and I did. I did always get along with Bjorn. I never had problems with him and that, I think, was my greatest rival.

“We wanted to grab each other by the throat, Connors and I, and Lendl and I. At the end of the day, we respected each other and, I’d like to think, made each other better players, and that’s really what it’s all about if you have a rival. We need more of that, obviously.”

What really drew millions of sports fans in America was the energy and personality McEnroe brought to any match he played.

“You need personality and you need to express yourself,” McEnroe continued. “People want to have, for whatever reason, a rooting interest. And if you lose that, you lose part of the sport that makes it unique in tennis. That’s why they’re trying to do some team events, so players can loosen up and be more themselves and get more into it and be more outwardly vocally behind someone when there’s an unwritten law of ‘You don’t do that’ on the main circuit so this is why an event like this can work so well.”

Three of the six players on each team qualify based on their ATP singles ranking as of the Monday following the French Open, with the remaining three selected as ‘captain’s picks’ and announced before the US Open.

“It’s great to visit this beautiful city of Boston,” said McEnroe on Tuesday, “This is a phenomenal sports town and I expect fans will raise the roof for the home team.”

This is the second time in the event’s history that Team World will play in their part of the world. The inaugural Laver Cup was held in Prague in 2017, followed by Chicago in 2018 and then Geneva in 2019.

“Laver Cup 2018 was unbelievably close thanks to the energy of the home crowd. I’m sure Boston will continue that tradition at TD Garden, one of the best venues in the world,” McEnroe said.

“We were leading last year in Geneva, we were so, so close,” McEnroe said. “I hope all of Boston gets behind us. The home court advantage together with our incredible team spirit and phenomenal players could be the magic ingredient that takes down our Team Europe opponents.”

McEnroe was welcomed to the city by Mayor Martin J. Walsh ahead of the Celtics game against the Brooklyn Nets, that he watched from the front row at TD Garden with Celtics owner Wyc Grousbeck.

McEnroe toured Boston in his red Team World Mercedes Benz taking in some of the sights, before arriving at TD Garden. McEnroe’s visit to TD Garden coincided with the 40th anniversary of his first achieving the ATP #1 singles ranking on March 3, 1980.

“Boston is an incredible city and has rightly earned the name ‘City of Champions,’” said McEnroe, who was presented with a personalized basketball jersey from Celtics forward Gordon Hayward and tried (in vain) to shoot over 7-foot-6 Celtics big man Tacko Fall.

Laver Cup Chairman, Tony Godsick, joined McEnroe at the game. “It is fantastic to be at the historic and beautiful TD Garden with John to officially announce the ticket on sale date. And how fitting it falls on the anniversary of John first ascending to the #1 ranking in the world.”

The last professional tennis tournament held in Boston was in 1999, when Marat Safin defeated Greg Rusedski for the ATP title.

The Laver Cup is a three-day event, created to honor the career of Australian tennis legend Rod Laver, who won the calendar-year Grand Slam in 1962 and 1969.