Look Out PGA Tour: Tiger Woods Says He ‘Sort Of Has A Bright Future’ 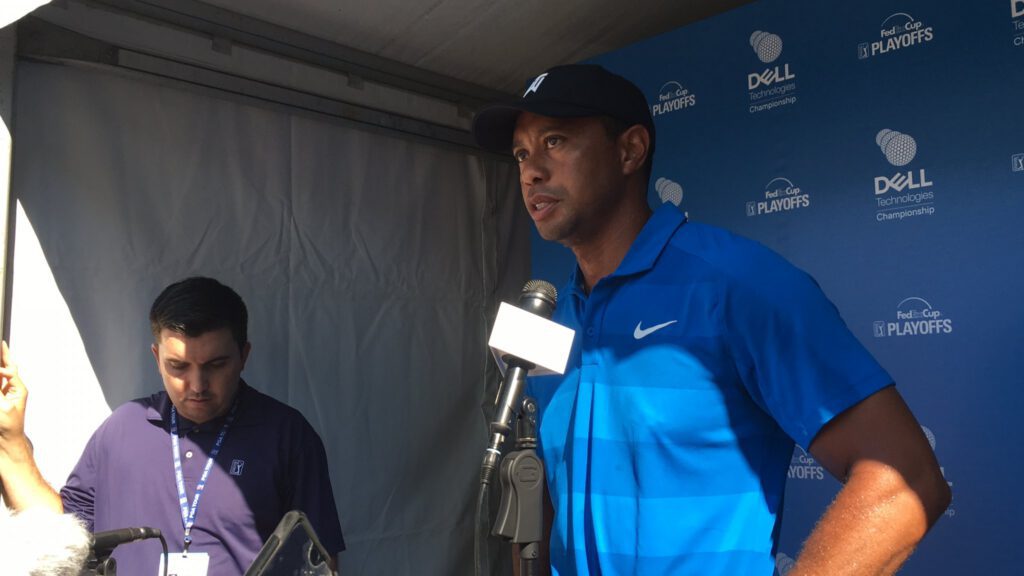 NORTON, Mass. — Tiger Woods has a new body and a new appreciation for the game he dominated for nearly 15 years.

The most accomplished golfer of his generation is back at TPC Boston this weekend for the first time since 2013, competing in the Dell Technologies Championship as part of the second leg of the FedExCup Playoff.

The winner of 79 PGA Tour events and 14 majors, Tiger Woods has been through hell and back with his back since he last appeared in the tournament that was once a cornerstone of his charitable foundation.

Woods had back surgery on Sept. 16, 2015. In late March 2016, he announced that he would miss the Masters while he recovered from the surgery. He had also missed the 2014 Masters due to a back problem. For the first time in his career, he missed all four majors in one year due to problems with his back. In October 2016, he told Charlie Rose on PBS that he still wanted to break Jack Nicklaus’ record of 18 major titles. Tiger underwent another back surgery in December 2016 and spent the next 15 months off the Tour. He made his return to competitive golf in the Hero World Challenge.

But Woods’ back problems continued to hinder him in 2017, as he missed the cut at the Farmers Insurance Open in January, and pulled out of a European Tour event in Dubai on February 3. On March 31, Tiger announced on his website that he would not be playing in the 2017 Masters Tournament despite being cleared to play by his doctors. Woods said that although he was happy with his rehabilitation, he did not feel “tournament ready.” In April 2017, Woods announced that he had undergone his fourth back surgery since 2014 to alleviate back and leg pain.

Finally this season, Woods feels back to normal with what many are calling a “new body”. On March 11, 2018, he finished one-shot back and tied for second at the Valspar Championship in Florida, his first top-five finish on the PGA Tour since 2013. He then tied for sixth with a score of five under par at the 2018 British Open Championship, making huge waves on the back nine when he tied for the lead on 11 on the final day before fading. At the last major of the year Woods finished second at the 2018 PGA Championship, two shots behind the winner Brooks Koepka. It was his best result in a major since 2009 (also second at the 2009 PGA Championship) and moved up to 26th in the world rankings. His final round of 64 was his best ever final round in a major.

“This has been one of my best years, considering that I didn’t know what I was going to do,” Woods told me here Thursday. “I just didn’t have a clue. And the fact that I’ve been able to make it this far is very exciting to me. I have a bright future ahead of me because at this point last year that wasn’t the case, didn’t know. But now I know that I sort of have a bright future.”

This year has featured five top 10 finishes in 15 events played, not bad considering he was truly entering the great unknown when 2018 started.

Those who compete with Tiger are happy to have him back on the prowl on tour.

“It means a lot. Myself and the rest of golf are very thankful,” 2017 DTC champ Justin Thomas said Thursday. “I mean we probably can’t even put into words or understand how much he was done for the game. And I think it gets a little misconstrued sometimes how we in no way will ever have any disrespect towards someone like him or Phil or whoever the greats are for the game that have helped the game get to where it is now. Just because he is who he is doesn’t mean I don’t want to beat him, the same with the rest of the guys.

“They’re the reason we’re playing for the money that we’re playing for now, the sponsors that we have now. And to have someone like him back after everything he’s gone through, after all the injuries, the surgeries, not knowing if he’s going to be at — all of us, not knowing and him not knowing if he’s going to be able to play. Not only play but compete again. And now to come out and compete and play pain free the entire year, basically play a full season, full schedule, it’s pretty cool. But after getting to know him a little bit I know he wants a lot more than what he’s just done this year. He wants to knock off some more wins and definitely some more majors.”

As for the past, Tiger won “his” tournament in 2006. And this week marks his “hello world” Nike campaign when he arrived as a pro on the PGA Tour for the first time at the age of 19.

“Well, the last few years seemed like it took centuries,” Woods said of his back ailments and procedures. “I was struggling a bit. But just looking back on it, I remember so many shots from my early start either in Milwaukee or Canada, BC, I remember all that. But hardly that it’s been 22 years since then. And it has gone by more fast than I would have imagined. When I first turned pro I felt like I was going to be out here — I would never get to, at the time, the Senior Tour. I had three decades to go. And now I’m eight years away.”

Massage Envy will be at the Dell Technologies Championship through Monday, with an exhibit located in the Fan Zone, where fans can receive either a complimentary demonstration of our Total Body Stretch service or a facial skin analysis. The area Massage Envy franchisees are also providing a 30 minute free Total Body Stretch card to anyone who downloads the Massage Envy mobile app and books an appointment while visiting the exhibit.

There are 40 Massage Envy locations in the MA-ME-NH-RI-VT states participating in the event. Massage Envy is the Official Body Care Sponsor of the Player Performance Centers, the PGA TOUR’s mobile training and wellness trailers.

PGA TOUR member James Hahn, ESPN soccer analyst Taylor Twellman, and Jeremy Ford, director of charitable giving at Dell Technologies, will serve as the judges for the event in Boston. At the finals, the winning team will receive a $75,000 donation from FedEx to their local Junior Achievement chapter.