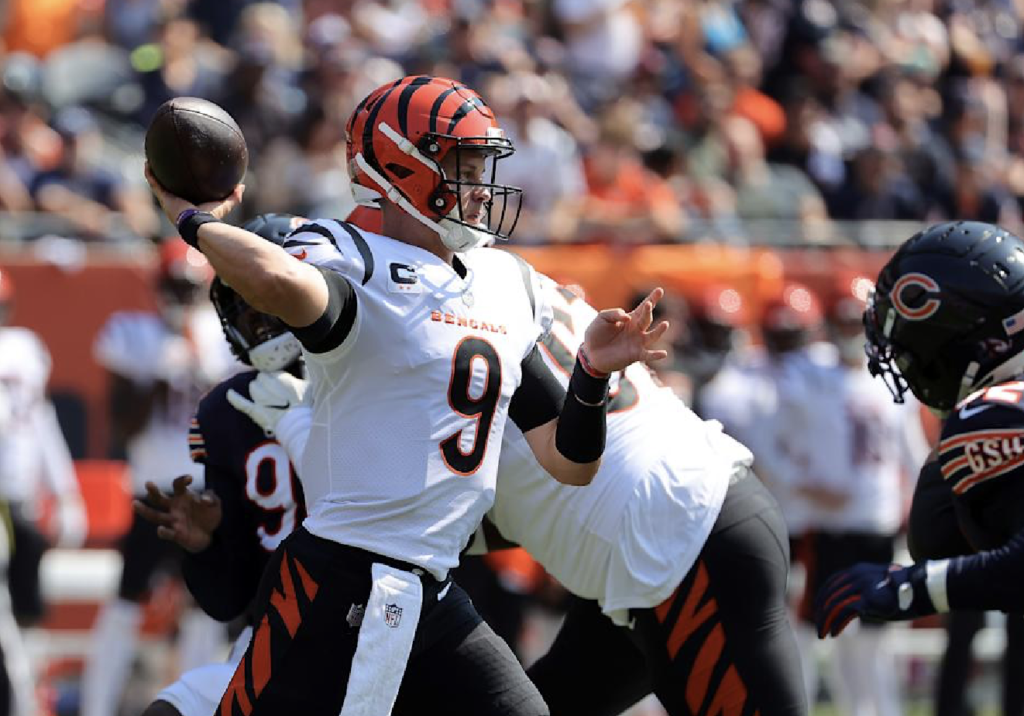 CHICAGO – The worst thing about a loss like Sunday’s in Chicago are the seeds of doubt that get planted in a young, developing team trying to “change the culture” inside the organization.

The Bengals came into the game with some fresh confidence, if not swagger, from their 27-24 overtime win against the Vikings on opening day at Paul Brown Stadium.

They entered with a quarterback with weapons to go along with confidence. They had a defense that starting to show its mettle up front with players like Larry Ogunjobi and D.J. Reader.

But an unsettling thing happened Sunday in Chicago. Joe Burrow looked rushed in the pocket, made poor decisions and worst throws, tossing three interceptions in a 20-17 loss to the Bears at Soldier Field. Burrow entered the game with an NFL-best streak of 199 pass attempts without a pick. That ended on Roquan Smith’s 53-yard pick-6 early in the fourth quarter. From there, Burrow looked like a QB without his mojo.

Worse yet, he and one of his star receivers sounded frustrated that Zac Taylor and offensive coordinator Brian Callahan didn’t dial up more home run attempts. They didn’t add Ja’Marr Chase to a receiving corps of Tee Higgins and Tyler Boyd to throw crossing and dig routes all the time. Burrow is a gifted passer and the Bengals need to get his mojo back if they are going to win meaningful games this season and attack opposing defenses.

The Bears made the Bengals secondary look porous on the opening drive, a drive that ended with an 11-yard touchdown pass to Allen Robinson in front of Chidobe Awuzie. Andy Dalton and the Bears scored first. No big deal. Or it shouldn’t have been.

But the Bengals offense on this day looked overmatch and out of sorts for three quarters until it scored twice within a 90-second stretch of the fourth quarter to make it a three-point game.

The Bengals whiffed in this game by missing blocks, fumbling easy runs after catches and getting a three-interception game from its quarterback. And not attacking a very suspect Bears secondary until they were down 17 on the road with less than 10 minutes left.

Ja'Marr Chase called like he saw it after #Bengals giveaway loss to Bears. "We waited too last-minute to take shots (downfield)." pic.twitter.com/llcvhcqthZ

The Bears were playing press early and off later and spent the afternoon sitting and jumping routes by all Bengals receivers. When defensive backs jump routes, they are opening themselves to huge plays down field. Ja’Marr Chase was among those wondering why the Bengals didn’t take the shots down the field earlier in the game to stretch out the Bears defense.

“Oh definitely,” said Chase, who caught a 43-yard touchdown in the fourth quarter that made it 20-10. “They were doing that the whole game. We knew that. We knew that.

It certainly appeared in listening to Burrow and Chase after the game, that Zac Taylor and Brian Callahan could’ve taken more shots down field to at least put some fear in the Bears DBs.

“We could’ve been (doing) that bro, honestly,” Chase said. “We waited too last-minute to take shots. We knew they were sitting the whole game. I was telling Joe. Tee knew. We’ve got to capitalize on the stuff we see early in the game.”

Sure, the Bears have a great front seven, led by Akiem Hicks and Khalil Mack. And yes they were getting some pressure. But, as Burrow admitted after the game, EVERY NFL team has pass rushers. You have to find a way to deal and still get the ball down field.

“It’s just conversation,” Chase said. “All communication. I’m not blaming it on nobody. It’s communication where we all need to be on the same page. That way we can all make sure we know what we’re doing. When Joe sees (something) or tell him what we see. It’s just communicating with the quarterback and offense.”

“You got to throw the ball over their head, at least make them feel like you are going to be able to do that and call some plays that go over their head,” Burrow conceded. “We’ll have to watch the film and reflect on everything. It’s tough to say anything right now without watching the film.

And you don’t win many games scoring three points on the road through three quarters.