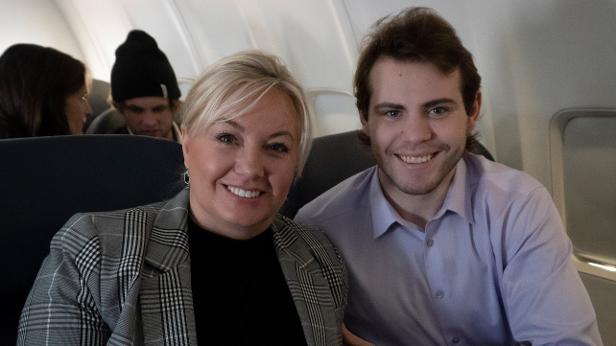 The cheers echoed through the bowels of TD Garden.

After the Bruins 5-4 win over the Jets on Thursday night, the source of the loud delight could be traced right to the Bruins locker room, although it wasn’t the direct members of the black and gold hollering.

It was the moms.

The Bruins’ mothers lined both sides of the room as they awaited their sons to come out and greet them. And one by one, “congratulations!” could be heard everywhere and hugs were aplenty.

“Yeah,” Jake DeBrusk said of feeding off the energy from the moms. “I think anytime they bring the emotion and the mojo, I call it, it definitely helps out the team.”

“Positivity!” Cindy DeBrusk, Jake’s mother, yelled out. DeBrusk did his entire postgame media availability with Cindy by his side.

While with his mom for the past few days, No. 74 got to have some of her homemade soup. According to Cindy, his favorite dish she makes is cherry cheesecake, but it didn’t seem as though that fit into her son’s nutrition schedule.

“There was lots of home cooking,” Cindy said. “Lots of love, lots of hugs, lots of fun.”

The moms traveled with the team to Nashville for the B’s game against the Predators on Tuesday night. They seemed to be the good luck charm, as Boston ended their losing skid with a 6-2 win over the Preds.

Thursday night featured the Bruins launch comebacks multiple times, as they were down 1-0, 2-1, and then behind 4-3 late in the game. DeBrusk had two goals. David Pastrnak continued his absurd goal-scoring pace, adding three against Winnipeg to put his total at 35.

He’s slated to end the season with 64 at this rate.

Even sweeter: Pastrnak scored a hat trick with his mother and brother in the crowd.

“It was their last game for awhile, so it was nice, always nice, to have family here,” he said. “Good to get the wins and good mood around here.”

The moms seemed to be the good luck charm over the past two games. After the win against Nashville, they could be seen lining the hallway to form a line of high-fives for the Bruins as they came out to greet them. In Boston, they squeezed out every cheer left in their leather lungs to congratulate their victorious sons.

NESN aired the moms’ reactions to almost all the Boston goals over the two games they were in attendance.

“We can probably hear them in the stands from the ice a little bit,” DeBrusk said of the moms. “We heard them right after the game come in all screaming so it’s a lot of support.”

The moms trip came at a time of dire straits for the B’s. They weren’t scoring goals and the losing skid seemed to get worse and worse. The mood in the locker room was dreary after their previous losses. They needed a boost and that’s where the mothers came in.

Cindy agreed the timing was impeccable.

“I think so for sure,” she said. “It’s been a tough last four or five weeks.”

Up until the Nashville win, the Bruins were 4-5-6 since Dec. 5. These past two wins have seemed like somewhat of a turning point for the group.

“It’s been great that we’ve been able to put two good games in a row,” Pastrnak said. “It’s been awhile since we’ve did that. We need to carry onto the road trip and keep building our game. I think we put a solid 120 minutes the last couple games.”

“It was a tough stretch obviously,” he said. “We always want to win. That’s one of those things where it seemed like the beginning of the year was coming to us. We wouldn’t really play our game or our style and yet we’d find ways to win. It felt like we were playing the way we wanted to play but weren’t getting rewarded so it was one of those things where we believed in each other in here. Obviously we have lots of good leaders and just try to stick with the program and understand it will turn.

“Obviously having the moms around is always a good time to start playing well.”

And as for the moms sticking around to be the good luck charm for the rest of the season?

“I’d love to stay, I’d love to stay,” Cindy said. “It’s been an unbelievable few days. The Bruins have treated us so well and so it’s precious to have times with these guys. He’s far away, right? We’re a long way from home so it’s been amazing.”