Lousy Officiating Aside, Tom Brady and Patriots Need to Look In A Mirror for Answers 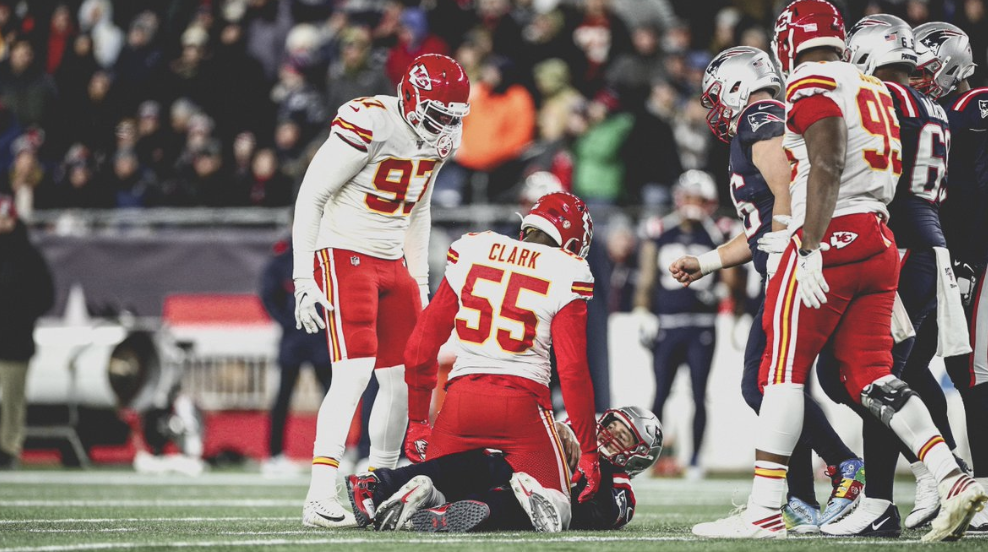 FOXBORO – Forget the terrible officiating in the second half of Sunday’s game.

That scapegoat is way too convenient for a Patriots team that is starting to show striking similarities to the 2015 gang that started 10-0 and lost four of their final six regular season games, earning a trip to Denver, where they fell in the AFC title game to Peyton Manning 20-18.

The 2019 Patriots really only have themselves to blame for a 23-16 loss Sunday to the Chiefs that all but eliminated any hopes of them reaching the No. 1 seed in the AFC. They are 10-3 and with Baltimore winning in Buffalo, they now trail the 11-2 Ravens by a game and lose on the tiebreaker.

The real takeaway from Sunday’s “Bogerman” fiasco is that the Patriots are going to have to raise their level of play against the teams they’re likely to face in the playoffs. Right now, they don’t look like they’re capable of sustaining 60 minutes against the elites of the AFC to even reach another Super Bowl.

And no one is hearing the clock tick louder than Tom Brady. Against the Texans, the Patriots fell into a 14-3 halftime hole and lost 28-22. Sunday, they scored on their opening drive and then had a golden opportunity to make it at least 10-0 when J.C. Jackson undercut a Demarcus Robinson route and picked off Pat Mahomes. Instead of turning the pick into points from the KC 40, the Patriots lost a yard in three snaps and punted.

They wouldn’t score again until Brandon Bolden’s jet sweep with 4:23 left in the third quarter, set up by a Nate Ebner blocked punt. A Devin McCourty forced fumble of a Travis Kelce catch should’ve resulted in a Stephon Gilmore scoop-and-score. But it didn’t thanks to bad officiating. The Patriots would manage just a 29-yard field goal from Nick Folk. Those would be the last points the Patriots scored on the night.

For two straight games, the Patriots offense went into premature hibernation during long spells. And it cost them in both cases.

“I mean, I think we’re just trying to figure out what works,” Brady said. “So, I think you have an idea and then you see how the game unfolds and then you’ve got to make some adjustments. So, we tried to make some adjustments there in the second half. They threw a lot of different defenses at us, some we handled pretty good, others we didn’t. It was a good game by them.”

The Patriots were an abysmal 2-for-12 on third down Sunday. They again looked lost in the red zone, converting just one of three red zone chances. They gained just 278 yards against the re-worked Chiefs defense of Steve Spagnola. Yes, the officials had something to do with that in the second half.

But let’s remember that drive after the J.C. Jackson interception. The Patriots have always been a team to seize the moment early and run a team out of Gillette Stadium. The Patriots don’t look like they have that knockout punch and it’s unchartered waters, to a degree, for the team to turn it over to the defense and special teams, which almost worked again. But that’s the thing, relying on two phases that don’t include Tom Brady against the elite of the AFC doesn’t sound like winning playoff strategy.

Granted it worked against Jared Goff and the Rams in the Super Bowl. But it’s hard to imagine the Patriots using that formula to get past Lamar Jackson and Pat Mahomes in the postseason, especially if those games are on the road.

Over the years, Brady and Belichick have figured out what they have and don’t have as strengths late in the season better than anyone in the game’s history. The sense that a solution will just appear this time like it did in Week 16 last year is obviously not assured, and Brady knows it.

“I don’t want to make any predictions,” Brady admitted. “I don’t think that’s – I think we come in with a plan to get better every week and try to win each game. Each game takes on a little different feel and the situations are a little different, and it’s a different team every year, too. So, I may have certain experience doing things, but this particular team as a whole hasn’t been through different situations. So, you just try to work through them over the course of the whole season, and we have three big games to go, and we’ve got to get back to winning football.”

Bill Belichick actually pumped the tires of his own team after they battled back in the second half, a sign that he realizes they are maxing out their effort right now and not getting results.

“I’m really proud of the way our team competed tonight,” Belichick opened his presser. “Those guys went and battled for 60 minutes. It wasn’t always perfect, there were certainly things we could have done better, but we were competitive right down to the final play and that’ll serve us well going forward.”

That more than anything tells you Belichick believes in this group. Kind of like in 2014 after a much-less competitive loss to the Chiefs on Monday night. The next week, like this week, they were onto Cincinnati. That was the unforgettable rally cry that carried them all the way to the Super Bowl XLIX win over Seattle.

“Obviously, we’ve got to do some things better than we did them tonight,” Belichick added. “It just wasn’t quite good enough under the circumstances in the game. There’s no point in talking about those, but hopefully we’ve got a lot of football left and see if we can get back on track next week, and that’s really all there is to it.”

“I don’t really get into the concern, and (what’s not a concern) and all that,” Slater told me when I asked him about the 0-3 mark against the Ravens, Texans and Chiefs. “I just try to focus on our team getting better, myself getting better as an individual. At the end of the day, you hope that’s good enough. I don’t think you can start watching the standings and get too caught up in that. You’ve just got to focus on the things you can control and take it from there.”

The Patriots have the woeful 1-12 Bengals next, a team the Patriots should roll over. Bill Belichick against rookie coach Zac Taylor. The Patriots defense against Andy Dalton and a Bengals offense that hasn’t gotten out of its own way all season.

And Tom Brady against the worst linebackers in pass coverage in the NFL.

On paper this is a mismatch that should land the Patriots back on track and improve them to 11-3, heading into a must-have game against the Bills back at Gillette on Dec. 21. But the scary thing about the way the Patriots are playing now – at least offensively – is they’re not capable of putting anyone away. They have three weeks to figure it out and then sit back and “hope that’s good enough.”

And then hope the officials don’t get in the way.