The Patriots took the practice field for their second mandatory minicamp practice on Wednesday. Here are my takeaways. 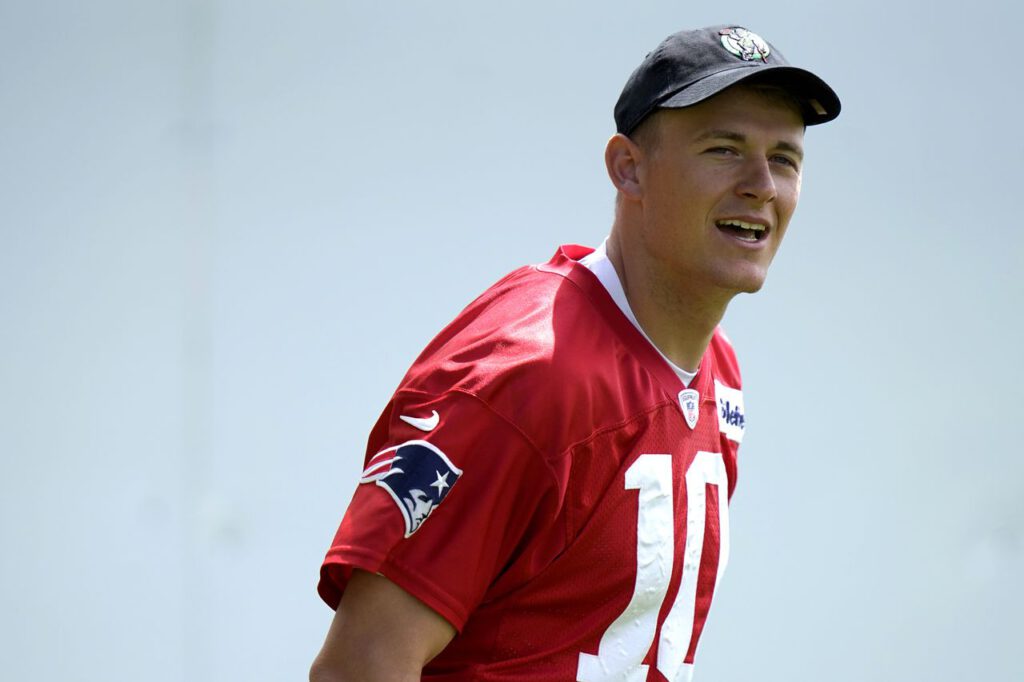 FOXBOROUGH, Mass. – It’s great to be back! After starting their mandatory minicamp yesterday, the Patriots returned to the practice field today where I had the privilege to try and figure out what the heck is actually going on this offseason in New England.

WR Kendrick Bourne returned to practice after an excused absence on Tuesday. Yesterday’s absence wasn’t terribly noteworthy, as coach Bill Belichick told us prior to practice that essentially, guys are in and out during minicamp and excused absences are to be expected.

Jon Bon Jovi was in attendance with owner Robert Kraft at today’s practice. They scampered around the field together for quite some time while “Livin’ On a Prayer” and “You Give Love a Bad Name” blasted through the speakers. An interesting omen – to say the least.

Anyways – that’s enough about celebrity cameos and excusing players in early June. Here are my real observations from Wednesday’s practice:

Quarterback Mac Jones has complete control of this offense. He essentially did not throw a bad ball all day. He was most impressive in 7 v. 7 drills – where he made several throws that made both the media and the team go “oooohh” and “aaahhh”. Most notably, a post-corner route to WR Tre Nixon. Jones threw his hands in the air and screamed following the completion.

Jones also threw a perfect crossing route right over a defender to tight end Jonnu Smith. Smith landed right in front of coach Belichick after the grab. Perhaps this was on purpose to make sure he gets better integrated into the system this year?

Nelson Agholor had a pedestrian day overall, but he did have one outstanding catch – a fade route over rookie CB Jack Jones that was perfectly placed in the bucket by, you guessed it – Mac Jones.

Second round pick Tyquan Throrton also made a play to write home about. He beat the Patriots defense deep and Brian Hoyer stuck him with a perfect ball that he made a diving catch on. The rookie showed some flashes of brilliance on Wednesday.

Matthew Judon… does not care about minicamp to say the least. He basically just trotted around the field laughing all practice and took his reps when he has to. I suppose that’s what you can do when you make an average of $13 million per season. Running around and singing along to Bon Jovi on that salary? Sign me up.

Though Mac Jones continues to impress – he was picked off by Malcolm Butler during 7 on 7’s. WR Kendrick Bourne essentially tipped the ball right into his hands and Butler was off to the races. He ended up in a scrum with rookie OL Cole Strange, who has had his share of dust ups this Spring.

Matt Patricia and Joe Judge continue to split up the offensive coaching duties pretty evenly. To start practice, Judge worked with the quarterbacks and Patricia worked with the offensive line. When the team came together to run their first set as a team – Patricia called the plays, which were all running back screens. Joe Judge ended up calling the 7-on-7 plays, and then they split 11-on-11’s. Still no clear direction.

Bill Belichick did pretty much nothing today, instead opting to speak with Utah State defensive coordinator and safeties coach Ephraim Banda for the entire practice. Though reports are that he’s been “hands on” with the offense this offseason, today he definitely took a CEO day today.

Mac Jones is once again the player of the day. He has full confidence and control of this system – and the entire team gravitates toward him. I’m ecstatic to see him take a leap this season.

We spoke with David Andrews, Matthew Judon, and Jack Jones among others after practice.

David Andrews cut his hair – calling it, “a new start I guess.” When asked about what it’s been like being coach by Matt Patricia – Andrews said that, “Matty P.’s done a great job… like all of us we’re just trying to work through this, trying to get better each day, learn from things and keep moving forward.”

Matt Judon told us that he “enjoys spending time with everyone in the locker room. I’m just glad to be back. Everything is different. We’ve got a different locker room, we’re going to have a different team this year and I’m just enjoying the moment.”

When asked about the dust-ups the defense has had with rookie Cole Strange so far, he told us that, “he’s a young player. He was trying to make a play. Great hustle from him… Cole is going to be a player for us. Yesterday nobody was hurt – we all came back out on the field. It wasn’t anything.”

Rookie cornerback Jack Jones looks to be a solid impression on the coaching staff thus far. When asked about if getting starter reps has given him confidence in his early career Jones said that he’s “a confident guy no matter where I am. I just play where I’m put.”

The Patriots will be back at it tomorrow before a Friday off day. Evan Lazar will have you covered from Gillette Stadium for coverage on Thursday’s minicamp practice. Hopefully I’ll be back soon. Follow along both here and on Twitter for all the latest!