Making the case for Harold Landry on the Patriots 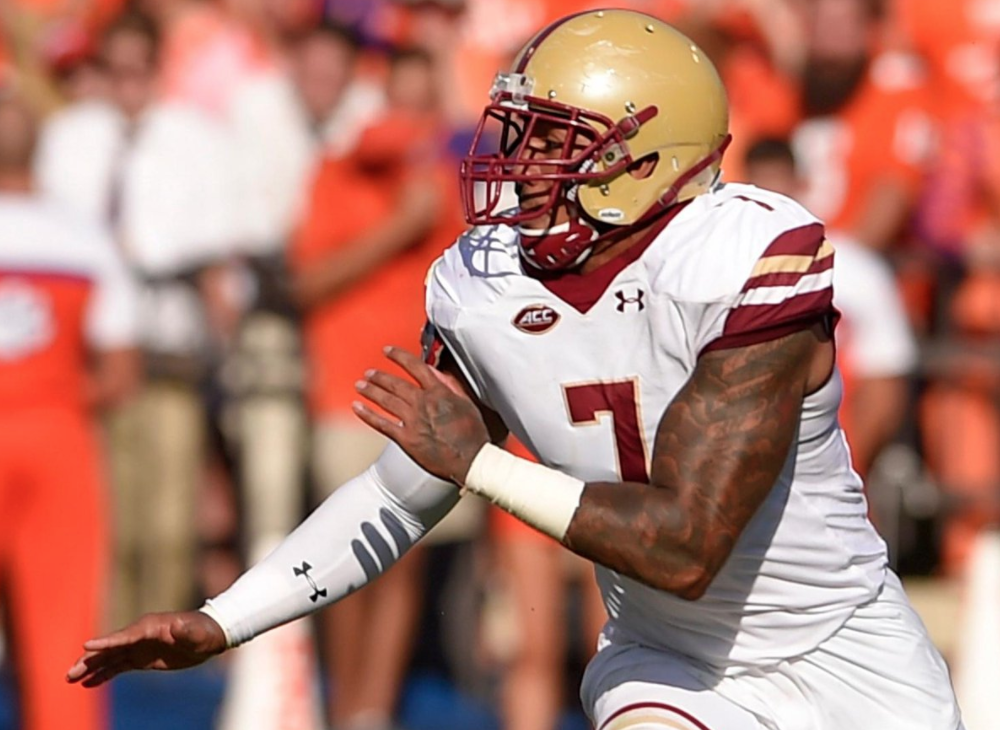 BOSTON — With the 31st pick in the 2018 NFL draft, the New England Patriots select Harold Landry.

Those words should not shock anyone on April 26, if indeed the Boston College star defensive end is still on the board and the Patriots haven’t traded down.

In running a set of defensive pass rush drills for about 40 minutes inside the Alumni Stadium bubble, Patriots defensive line coach Brendan Daly got an up-close and personal look at Landry on Wednesday before and during Pro Day.

What he saw was a player with strength, quickness and a burst that is ideal in a modern-day NFL pass rusher. But he also got a glimpse of the attitude and desire that the Patriots have always valued.

In Landry, an NFL team would get a player with a lot to prove. After leading the nation in sacks (16.5) in his junior year, he had just five in eight games in an injury-shortened 2017, missing his final five games with an ankle injury.

“With way the way my senior year ended, I definitely have a chip on my shoulder and I definitely believe I’m the best edge rusher in this class,” Landry declared Wednesday. “Going into rookie mini-camp, I’m just going to go in with my head down and go to work, earn the respect of my coaches and teammates and be able to get on that field and be able to show that I am the best edge rusher in the class.”

Landry is not Bradley Chubb. Landry is 6-foot-3 and 250 pounds while the N.C. State star end is 6-4 and 275, and almost certainly going No. 2 to the Giants (Jason Pierre-Paul traded to Tampa Bay) or the Colts at No. 6, two teams in dire need of a top-tier pass rusher.

So why exactly does Landry feel so confident in his elite skills?

“I think nobody in this class bends like me, I don’t think anybody can get off the ball like me or (get) on a burst to the quarterback,” Landry said. “And (Wednesday), I showed I could play 3-4 or 4-3. I’m more stronger, explosive, faster and flexible than I even was in the past two seasons here (at Boston College). I’m definitely looking forward to getting into camp and just going up against veteran guys and earning their respect and building on my craft every single day.

“I think the one that separates me from people at my position is my mindset. I’m one of those guys that, even with the success I’ve had, I don’t care. I approach the game like I’m going to be an undrafted free agent. That’s how I approach the game and I have something to prove every single day, and I do going into rookie mini-camp. And I’m just looking forward to that opportunity, working every single day towards camp. I’m just ready to get it going.”

So what did the guy conducting his workout think?

“He did a really nice job in the workout,” Daly said. “The kid is a very good athlete. Honestly, I was more impressed in the time I got to spend with him (Wednesday) morning, watching his tape and get to know him as a person. I really enjoyed the exchange. He’s been well-coached He knows football well and it’s a testament to the guys in this program, coach (Steve) Addazio, (former) coach (Paul) Pasqualoni, coach (Jim) Reid, the guys that have worked with him have done a really good job.”

Does Daly think Landry would fit in with the likes of Adrian Clayborn, Trey Flowers, Deatrich Wise and Derek Rivers with the Patriots?

One thing is for sure, Landry, a one-time top-15 prospect, wouldn’t mind dropping to No. 31 if it meant playing for Daly and the Patriots.

“He’s a very intense guy,” Landry said. “You can definitely see the culture of the New England Patriots within him, and honestly it would be an awesome pleasure to go and play for that guy and play in New England. You can definitely see how intense he is and how hard he coaches. Coach Pasqualoni was the same way when he coached us and you’ve got to love it. I thought it was a good day.”

Wednesday was simply a reminder to Landry that no matter your credentials or track record, you’ll be pushed to always to improve at the next level.

“100 percent. Even with the amount of success I’ve had here at BC, there’s tons of things I know that I can improve on,” Landry said. “I’m definitely a humble guy and I’m ready to go to work every single day to improve my craft. No matter who you are, there’s always room for improvement in your game.

As for his bothersome ankle, Landry assured everyone that it’s “100 percent” healthy and ready for the rigors of an NFL mini-camp.

“The combine was a whirlwind. You’re up till (midnight), meetings after meetings after meetings and then you’ve got to be up super early,” Landry said. “It’s definitely been a crazy experience but but you’ve got to love it. For me, my family and football is my life. I love the grind and I love all the stuff that comes along with football. I love meeting with all these teams. I love being able to meet new guys.

“Me and my dad have been lifelong Redskins fans and being able to go into a meeting with Redskins staff and seeing Doug Williams in there, one of the great all-time quarterbacks, it’s a great feeling. I love this stuff. It’s been kind of hectic and stuff but you’ve got to embrace it.

“I felt so much relief when the combine was over and could finally take one day, take a deep breath but you know you next day you have to get your feet on the ground because I had today to do. Now it’s just all football. You don’t have to worry about running a 40 or this and that. You can just focus on getting better at your craft so when you go into camp, you can do some things, get things rolling.”