Manning: Al Horford Trade Will Go Down as Best of NBA Offseason

The Celtics' preseason game showed how Al Horford could become one of the best offseason additions, since Boston had a specific need for him. 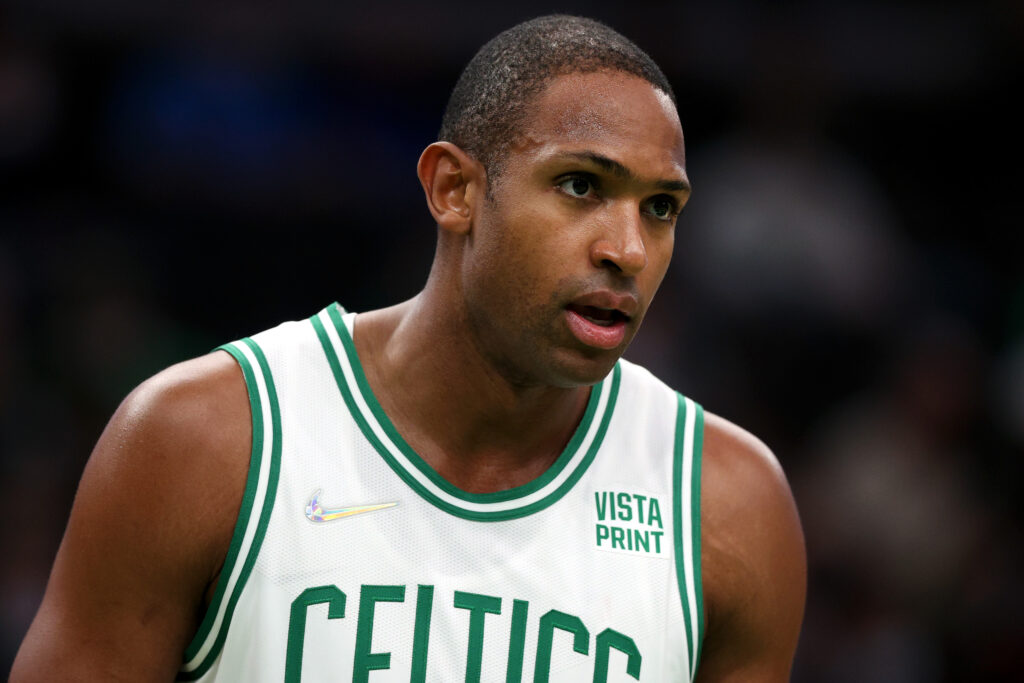 BOSTON, MASSACHUSETTS - OCTOBER 04: Al Horford #42 of the Boston Celtics looks on during the first quarter of the preseason game against the Orlando Magic at TD Garden on October 04, 2021 in Boston, Massachusetts. NOTE TO USER: User expressly acknowledges and agrees that, by downloading and or using this photograph, user is consenting to the terms and conditions of the Getty Images License Agreement. (Photo by Maddie Meyer/Getty Images)
Share
Facebook Twitter Email

BOSTON — Al Horford came off the Celtics bench for the first time on Monday in a Celtics uniform, something he’s only done six times since his rookie season. It gave a partially-filled, but loud preseason TD Garden crowd a chance to welcome him back after a stoppage in play. The PA announced him after Dennis Schröder with play already beginning, Horford rising up for a defensive rebound. The crowd’s reaction didn’t reflect what could possibly go down as the trade of the offseason.

Horford darted the length of the court with the ball, unloaded a hurried pass to Schröder across half court, caught it back in the high post and swung another pass to Jaylen Brown in the corner. Ime Udoka previewed a new-look, faster offense in Monday’s 98-97 win over the Magic, with Horford’s catch-and-runs breaking the team into half court offense fast.

The Celtics sent oft-injured Kemba Walker to the Oklahoma City Thunder with a first round pick that Sam Presti flipped for a future heavily protected one. Oklahoma City released Walker, a startling move considering their unwillingness to do the same with Chris Paul and Horford as stopgap veterans whose sizable contracts got dumped to the Thunder. The Thunder felt confident they could get a pick for Horford and did. They didn’t feel the same about Walker. All that didn’t need to happen for Boston to score a win in the deal.

“We know what we have with Al,” Udoka said before Monday’s game.

In some ways, Horford picked up where he left off. He wore No. 42. His subtle impact and modest stats — five points, seven rebounds and one steal — didn’t reflect the entirety of what he brought to the game. Fans seemed to realize what they lost in that kind of player with their applause. A fan belted out “WELCOME BACK” toward Enes Kanter, another beloved role player from an east finals Celtics team, familiar faces endearing themselves to the fanbase quickly. It’s why I started to dream of a Walker-Horford swap over the offseason.

The Celtics can plug Horford at the four or five, space the floor with his three-point shot, run plays from the high post or rely on him to front imposing big opponents. Horford appeared spry, flushing an alley-oop from Schröder, and set strong screens alongside his rebounding. He felt better than ever after focusing on working out and regaining health instead of playing once the Thunder sent him home last winter.

Horford, now 35, won’t stand out among the more lofty additions like Russell Westbrook in LA, the array of sign-and-trades like Kyle Lowry and Lonzo Ball, or even stat-stuffing center Jonas Valanciunas landing in New Orleans. The trade did not appear in the NBA GM survey among top offseason additions, or even most underrated. He probably won’t even put up stats in line with his last Boston stint, since he’ll split time with Robert Williams III in the front court. Still, the combination of what Horford brings, what the Celtics lacked last year and the difficulties Walker’s health presented to the 2020-21 Celtics put his addition up there with those moves.

“Al has done what he’s done all preseason since he’s come back in open gym,” Udoka said. “He looks great, he’s a steady force for those guys out there, very knowledgable and can do a lot of things.”

The Celtics glowed about Horford’s presence and he spoke about lessons learned last week, things he wants to do better this time. More perspective. He wants to talk more than he did last time, when the locker room broke down to the point where Kyrie Irving, Marcus Morris, Terry Rozier and he all left in the same offseason. That opened the door for Jaylen Brown, Jayson Tatum and a hefty back-to-back class of rookies to take over the roster. Horford is now less of a centerpiece and more of a bridge between those two groups and an influx of new veterans.

Brown nominated Horford for a captain role on the roster anyway, still commanding that stature that led the Celtics to back-to-back east finals as much as Isaiah Thomas did. On Monday, he spoke to Schröder through a play in the back-court, he flexed his elbows back toward Aaron Nesmith motioning a missed box-out opportunity when R.J. Hampton beat the second-year Celtics guard for a put-back dunk.

Brown took his lead later in the game, with Horford on the bench, calling out Robert Williams III for leaping toward half court on a contest and leaving the play while Orlando got a second-chance. The Celtics aimed to be more direct and aggressive, as an extension of their blunt new head coach, who called out the team in a variety of ways following a preseason win.

“It was up-and-down,” Udoka said. “There was some times we moved it well, some times we stuck to the ball too much and tried to go a little too much one-on-one, and had some turnovers early.”

The Lakers ultimately need to answer difficult fit questions between stars LeBron James and Westbrook, two ball-dominant inconsistent shooters used to running the offense. Age is a question for both Lowry and Horford, while the Pelicans’ ceiling could be low if Zion Williamson’s foot injury keeps him out long in a competitive west. Horford has as much of a chance as any other player to raise the Celtics’ ceiling.

His role needs to be determined first. Udoka experimented with Juancho Hernangomez to mixed results, six points, four rebounds and a block, without any immediate signs of floor-spacing on a Celtics team starving for shooting. Schröder and Josh Richardson struggled from the field. Horford, never a volume three-point shooter, is one who’s become more efficient each season and may need to remake himself as something of a stretch four. He started 1-for-4 on Monday. In Philadelphia, Udoka thought the 76ers mismanaged Horford, not attacking mismatches enough, so there’ll need to be a balance in his usage to correct that.

The Sixers also put him on the wing defensively often, guarding the likes of Tatum, something he may need to do again in Boston and manage given the number of switches he saw on Monday. He felt comfortable against them, likely ready to call out the switches at Wednesday’s practice that the Celtics botched.

With Udoka certain of what he brings, he may be a shoo-in next to Williams. A deeper, more defensive and matchup-oriented Celtics team has a better chance to win each night.

“We’re going to have a lot of options,” Horford said during training camp. “A lot of things that we can do, we’re very versatile as a group, so that’s something Ime’s excited about, something I’m excited about. Kind of keep us unpredictable, that’s a good thing.”