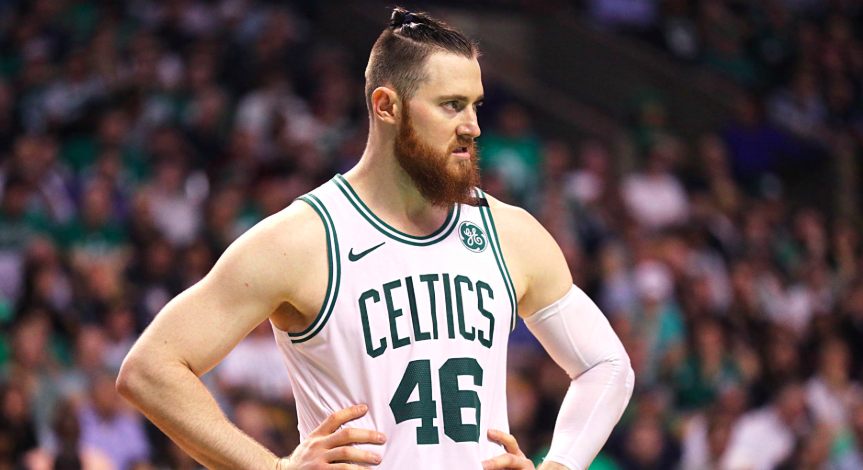 Danny Ainge couldn’t talk about the reported trade after the NBA Draft. This wasn’t Paul Pierce or Isaiah Thomas, but when the Celtics traded Aron Baynes to the Phoenix Suns during the NBA Draft, it reminded that Ainge will trade anyone on a dime. Even after all that’s happened these past few seasons

The Celtics stuck to their guns on draft night to create cap flexibility and acquire future assets. Their moves and Ainge’s candor reflected a team prepared for a youth movement, rebuild, whatever the term. He had to move Baynes to initiate it, and sent him to the NBA’s desert franchise.

Baynes twice took $5 million with more money certainly available to stay in Boston. He repeatedly threw himself into damaging contact. He shifted between starter and bench roles seamlessly. The three-point stroke he developed became one of the pleasant Celtics surprises of the decade. His personality held him in beloved regard by both teammates and media.

Neither Baynes nor the Celtics could have predicted both Kyrie Irving and Al Horford would intend to depart. Baynes opted in on June 12, expecting to play for a contender. When that changed, the Celtics communicated that they would offer him in a trade. The reporting on Baynes’ response to that has been mixed.

Whether Boston intended to trade him to a contender or not, he landed in Phoenix, now intent to keep him. The Celtics saved roughly $7-million in cap space by unloading his salary and the No. 24 overall pick. Ainge received a 2020 Bucks first-round pick from the Eric Bledsoe trade.

The move’s effectiveness and the Celtics’ direction with this cap space are both uncertain. It is clear that Ainge will continue to deal beloved players who remained committed to the team to advance Boston’s interests.

That may be sound managerial status and it worked in the Thomas trade. Though Ainge received criticism around the league for it. Thomas’ tenure helped Boston sign Al Horford and Gordon Hayward. Now Horford appears prepared to leave Boston after the culture developed during that Thomas tenure capsized last season.

The Celtics now face coinciding goals that juxtapose each other in cases like Baynes’. Ainge needs to rebuild the talent in town. He’ll do so through asset accumulation and maintaining flexibility. But to do anything with those two things, Boston needs to have the culture to attract players. Any ill will formed in the Baynes trade hurts that effort.

The mid-tier players will always come where the money and playing time is. Boston has to be in the game for the top-end talent as they recently were. Those players often have peculiarities that render one max offer better than another. Other just want to play in New York.

There’s no report that Baynes is upset, or that any remaining Celtics player is irked by his departure. Though it’s a possibility making a move on the fly the way Boston did. If a superstar favors loyalty, that could hurt down the line.

Ainge can only cater to players so much while running a basketball operation. The Celtics do need to realize, however, where they’re situated in this rebuilding phase. Leverage like Anthony Davis’ to choose destinations is becoming more normal.

Davis did not want to want to come to Boston. That likely tied to his obsession to reach Los Angeles more than any disdain for the Celtics. Players do talk though in a player’s league, and the Celtics will need to accept the leverage they’ve gained.

In this new era — Trader Danny may need to slightly adapt his aggressive ways.