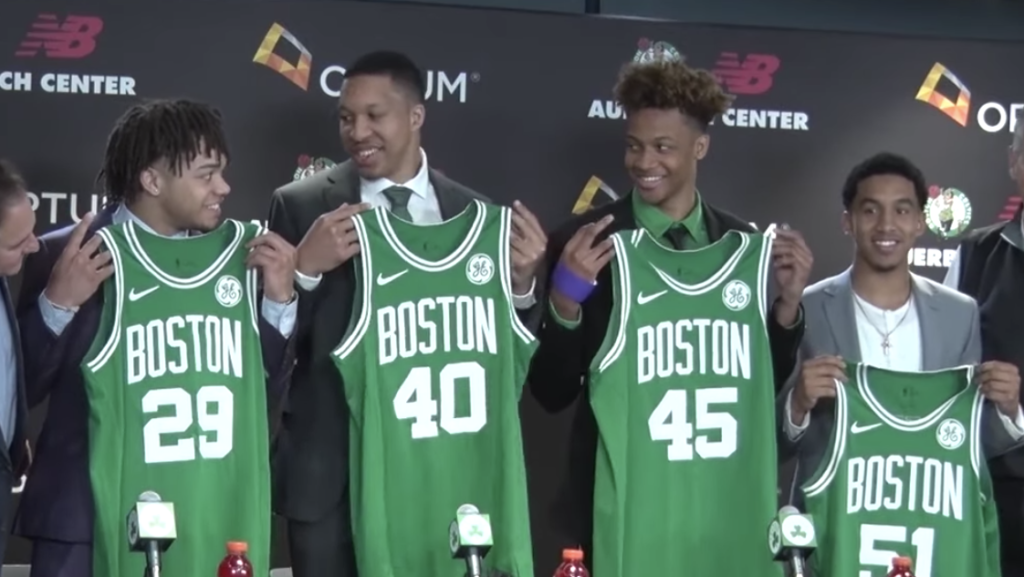 Smiles, college success and laughs filled an Auerbach Center still stinking from the discontent of last season. Four rookies drove out the bad energy with their enthusiasm and clear camaraderie. Two even commented on the apparent impending departure of Kyrie Irving.

All it took was a question from Gary Washburn urging the four to scout each other. The room lit up immediately. Grant Williams placed himself last, giddy to respond. He texted the others the night before to set up his Playstation. Carsen Edwards chimed in with a “hey” and waving emoji.

They knew each other’s games from competing in the past. The phrase “good guys” flew across the room as regularly as jokes and one-liners. The good vibes were well-need, but the question remains: is Boston good enough without Irving and Al Horford?

“That makes life more enjoyable, when everyone is humble, hardworking and will play any role they have to make a team succeed,” Danny Ainge said. “You do have to have a certain amount of talent in our league to win as a well all know. But good people makes coming to work more fun.”

Edwards recalled Purdue’s game plan to pressure Langford. Langford and Williams both said their teams played to prevent Edwards from catching the ball.

“With Carsen, our whole thing was try and not let him catch it just like Romeo said,” Williams said. “We know he can light it up from range and he can switch to a four man in the league and hold his own. I called him ‘little bullet,’ because of how stocky and how strong he is.”

Williams even remembered seeing Langford play in high school. All four prospects shared a March Madness run last season and extolled switching. Their willingness to do whatever is needed in Brad Stevens’ system shined.

Ainge said the four appear to have a strong bond. He said players usually know of each other coming into the league, but wasn’t sure if this level of familiarity is rare.

“I think it’s just being us,” Waters said. “We all have great personalities, we’re open. I’m a people person and they are to. Just being ourselves, knowing that we’ve played together. They’ve always been great guys toward me.”

The impending loss of talent on the roster became more apparent too. What Ainge wouldn’t comment on after the draft, emerged implicitly through comments

Waters joked about the sour topic of bringing up Irving when he referenced he watched his videos preseason. Ainge acknowledged flexibility ahead. Williams denied bashing Irving’s flat-Earth theory in an old interview with Shams Charania, “I was just trying to say something scientific.”

With Langford possibly missing Summer League with his finger injury, the road to seeing what these players actually bring to the table could be longer. For now, they remain a much-needed breath of fresh air.