Where are the Celtics going amid another season of .500 basketball, and how can they support that at the Trade Deadline? 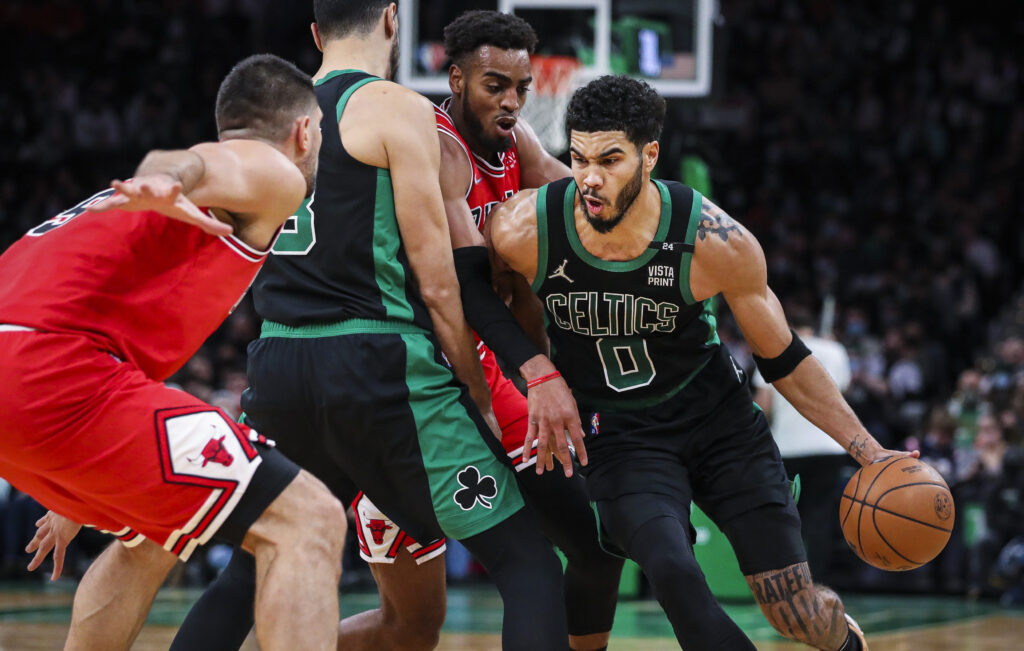 That wasn’t the case during a 111-99 drubbing at the hands of the 76ers Friday. They salvaged Saturday’s game against the short-handed Chicago with a win, making plays early and late, but posting a 126 defensive rating in the fourth and allowing second-half runs. Progress on offense came with some regression in their own end.

The question for this team less than one month from the trade deadline: what are we doing here?

Ime Udoka is trying to implement habits through a style of ball movement and free-flowing offense. As he noted pre-game on Saturday, it’s getting better, but Brad Stevens kept a cast of younger players on the roster who haven’t gotten involved or helped there. Udoka’s rotation remains ultra-tight even through heavy minutes for his starters, Al Horford hit 30 again in the win over the Bulls, and a busy schedule.

Development feels secondary to scrapping out any win the group can find. The .500 slog continues, whenever they can climb back to that point. Udoka is doing one thing, with a roster lacking the shooting and playmaking to accomplish it provided by Stevens. After putting blame on the team in New York, Udoka moved toward his own accountability, but are players and coach alike set up to succeed right now? And what is success in 2022?

“It’s on everybody, the coaching staff as well, to get us in the right sets, but also our execution of what we want to get out of those,” Udoka said Friday, echoing responsibility he took pregame for losing close games.

As the trade deadline approaches, coach and GM need to chart a definitive path into the future. Dennis Schröder’s effectiveness waned substantially over this past month, shooting 41.1% from the field and 30.2% from deep since he scored 31 in Portland. He isn’t a fit to the style they’re pursuing and his lack of Bird Rights limit the team’s ability to keep him around. Trading him and letting Payton Pritchard be a passing outlet for the Jays is one answer.

Horford’s sharp offensive decline continued over the past month, until he broke out with 7-for-11 shooting Saturday after the team held him to 22 MPG for four nights. Josh Richardson is helpful, shooting 5-for-9 against the Bulls, though not critical to outcomes. Neither project to impact this group long-term. Selling them probably doesn’t help Boston now or later though.

So how could multiple players on this roster be consolidated, and to what end? The shooting, off-ball movement and playmaking haven’t accentuated what Udoka set out to accomplish with the Jays.

Adjustment is needed. Marcus Smart would’ve helped the Celtics defend better on a night where they showed little organization on that end Friday. He could’ve settled Boston down during a spiral-filled first quarter, not the fourth this time. But the Celtics can’t seem to survive a single starter being out without spiraling and losing control of the offense at times.

The same fourth quarter story nearly happened again yesterday, allowing a 23-10 late Bulls run to lose a lead they would regain from down six points late, thanks to Schröder, Jaylen Brown, Robert Williams III and an unwise Nikola Vucevic loose ball foul in a tie game with Boston in the bonus. They only escaped.

Jayson Tatum flopped as a facilitator (11 turnovers) these past two games, recording back-to-back turnovers late in the Chicago game and finishing 8-for-24. Schröder provided next to nothing in a one-point spot start for Smart in Philadelphia, recovering with 16 points and eight assists Saturday. Udoka waved the white flag with nine minutes remaining in the fourth quarter on Friday, after the Celtics couldn’t even push within 10 down 13 against Philly’s bench unit early in the final frame.

Joel Embiid posted 25 points, 13 rebounds and six assists. Nothing Philadelphia did offensively blew Boston away, shooting 44.7% from the field and 34.1% from deep. Yet the Celtics energized the Sixers with 20 turnovers, now ranking 27th with 15.7 per game in the new year, handing Philadelphia 31 points following them.

Pritchard shot 7-for-10, making Boston’s biggest push late. Richardson struggled. Aaron Nesmith scored in garbage time. The Celtics never found a counterpunch, even with the 76ers never fully putting them away after Philadelphia’s early 28-2 run established a 20-point advantage for most of the night.

Brown, Tatum and Schröder had just combined for one of the highest-scoring games by a trio in Celtics history against the Pacers. Boston found a late-game rotation that worked earlier in the week, playing Richardson and Grant Williams, with Brown keying the late playmaking. The Celtics even moved into the top five in defense.

Of course, none of it lasted. A win over the short-handed Knicks, a Pacers team starting Duane Washington Jr. and Keifer Sykes,then a replenished Indiana group that curiously stayed attached to Boston’s perimeter players in a loss two nights later. The 76ers didn’t give them that, and the win streak’s momentum halted.

Williams III kicking out to Horford? Go ahead.

Tatum and Schröder playing a two-man game? Let Tatum give it to the second man.

Boston goes to zone? Philadelphia had shooters, the Celtics didn’t have discipline.

The pressure on Brown and Tatum as playmakers remains enormous. The shooting around them, hideous. Boston shot 38.9 eFG% in their 32-14 first quarter loss to Philly. They settled into isolation ball, throwing he ball away with a 50 AST% and 0.38 AST:TO ratio.

Shooting fewer threes against Chicago and splitting the defense with cutters through Williams III and Horford worked Saturday. Against teams smaller on the wing with less resistance inside, that’s an option. Not against the 76ers’ drop defense.

This is just freaking great stuff. The game is always a grind for Tatum. So difficult. Playing off Rob makes it that much easier. I don’t think I’ve seen Tatum get a downhill look like this from a teammate in ages. pic.twitter.com/U8y1a9BCYG

The Bulls were also missing Zach LaVine, Lonzo Ball, Derrick Jones Jr. and Javonte Green defensively. Many teams can stack the box and make it impossible for the Celtics to emphasis looks at the basket, as Embiid noted. The book is out on Boston.

Joel Embiid, on their improved defensive execution tonight: "Charlotte, they move the ball extremely well and they have shooters all over the place, and they made a bunch of jump shots. Boston is more of an iso heavy team, so it becomes easier to load up and try to stop them."

One step backward. One uneven step forward. How can Stevens change the pattern?

Since the seller market looks crowded and Horford’s contract massive, limiting Boston’s ability to selectively dump-off, that brings us to the young players. Pritchard, Nesmith and Romeo Langford. Does Boston have developmental ambitions for them? The minutes don’t indicate such, and if Stevens feels differently, then the roster needs to be morphed in a way that allows for them to play. Note: Sam Hauser scored 31 points in Maine SAT.

If the Celtics don’t care about the youngsters, it’s time to pursue other options if opportunities present themselves, perhaps other young players that didn’t work in other places and may in Boston. Boston missed a chance to get in on one with the Cam Reddish trade last week, the cost being a late-round first round pick and a struggling young player in Kevin Knox. New York’s ability to send Charlotte’s pick was an advantage.

Jalen Smith fits that second draft mantra and wouldn’t cost much, since the Suns dumped their rights to re-sign him by declining his team option. Jeff Green at 35? Not quite. He doesn’t even impact the roster’s core.

“Ultimately, our driver has to be what helps us get in the mix to hang the next banner,” Stevens said earlier this month. “One of the things that we have to decide in each of these deals that we’re discussing, that are presenting themselves and in every single phone call that we are a part of, is does that make sense in helping us do that?”

Yet many of those transformative moves likely prompt requests for Brown to be involved in the deal. Small fixes may not change anything. Given the team’s lack of fortitude in key moments, even medium-sized changes to the roster may not alter the group’s fatal flaw. That’s a scary possibility.

They’re getting repetitions and slowly improving in recent weeks though, so you might have to take a risk and find out. They’ve tried offloading Kemba Walker, changing the coach and GM. It’s arguably gotten worse. How much would Harrison Barnes, Buddy Hield, Bogdan Bogdanovic, Norman Powell or Jerami Grant help? I’d love to find out.

While a move can hurt more than help, doing nothing is a choice too, and the team’s last 12 games going back to the Christmas collapse paint a picture of the Celtics being in need of change. It could be as simple as this mix growing stale, and given Williams III’s poison pill provision and recent solid play, it’s worth hanging on to him.

Boston should instead see how far stacking salaries and picks can take them toward consolidation, then ask the tough question on Smart — what’s the tradeoff between his defense and playmaking to Boston, and his value to others?

It takes two. Do the Kings, Hawks and Trail Blazers’ fixation on bigger deals (Ben Simmons) prevent any opportunity for swapping out their shooters with Boston? Possibly. The question of what the Celtics can offer is real too, their record likely tightening their grip on their own picks, while Smart and Williams III aren’t easy players to move immediately. You need both of them, but hold on to everything and you have nothing to offer.

It feels like the right time for a risk, whether it’s diving in on a shooter, selective selling to open youth minutes, or second draft swap-outs. Brown and Tatum are trying hard in key situations, Boston needs to return the favor and help them — and help themselves by mapping out some long-term direction.

“They’ve shouldered so much of the load on both ends of the court,” Udoka said Saturday. “To see all these guys in double-figures is obviously a welcome sight … it’s great to see everybody contribute … when we have this balance, we’re a much harder team to defend.”