Ime Udoka needs to find pockets to feed Payton Pritchard as many minutes as possible, allowing Pritchard to accentuate the Celtics' stars. 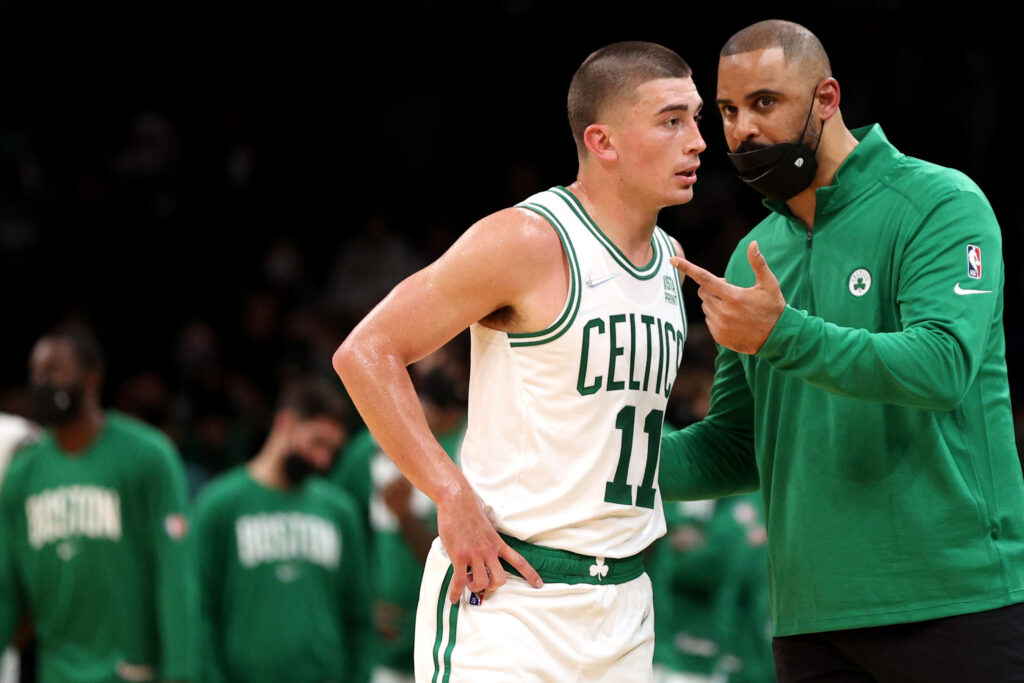 BOSTON, MASSACHUSETTS - OCTOBER 04: Boston Celtics head coach Ime Udoka talks with Payton Pritchard #11 during the second half of the preseason game against the Orlando Magic at TD Garden on October 04, 2021 in Boston, Massachusetts. NOTE TO USER: User expressly acknowledges and agrees that, by downloading and or using this photograph, user is consenting to the terms and conditions of the Getty Images License Agreement. (Photo by Maddie Meyer/Getty Images)
Share
Facebook Twitter Email

The Summer Celtics returned on Wednesday, allowing Payton Pritchard to again showcase his growth as their floor general. Ime Udoka had entrusted Joe Mazzulla and Boston’s Summer League staff to develop Pritchard’s passing, vision, defense and pick-and-roll prowess. Pritchard did so alongside Romeo Langford and Aaron Nesmith, who also started in Orlando yesterday while veterans rested or remained out with COVID-19.

The trio’s poise and connectedness with each other flashed, solidified by the improvement plans the Celtics set out for all of them in Vegas. Their success translated to this preseason against NBA veterans. Pritchard comfortably commanded the court, finding his spots and occasionally others. His strengths from a year ago sharpened too — shooting and dribbling — enough to help a Celtics team that could utilize his spacing and pacing.

Pritchard won’t play Friday’s preseason finale with a nose injury. That ruins the opportunity to forecast where he falls in the Celtics’ hierarchy in the preseason game that typically most previews the regular season. Seven summer games couldn’t turn Pritchard into Kemba Walker in the pick-and-roll or forecast he’ll be the future at point, however much he improved. Fortunately, Pritchard doesn’t need to be a passing maestro on this team.

Udoka and his staff simply need to find pockets to feed him as many minutes as possible, allowing Pritchard to accentuate the team’s stars. Marcus Smart and others will handle most of the playmaking, unlike in 2020-21 when Pritchard often struggled as a de-facto backup point guard in spot starts with Walker and Smart out.

“We want him to learn the position,” Udoka told CLNS Media Wednesday. “We always preach to him about making plays not just for yourself, but for others. He’s a guy, obviously, that teams are going to guard a specific way, because of the shooting ability. We want him to get downhill and find other guys.”

The Celtics have found ways to heavily integrate smaller guards as offensive engines before like Isaiah Thomas and Walker in the past, with help defense and dropping centers. Boston relegated playmaking through multiple players and won despite the flaws and size of their point guards.

While Pritchard’s not at the same level, this team’s need for a player like that could be greater given the lack of shooting at the guard position. Pritchard can hone a more concrete role on this team. Smart and the trio of creators can run point and hide Pritchard on shooters and escape mismatches with scramble switches. He would become more of a pseudo two man.

Pritchard started at point in yesterday’s game peppering Orlando with jumpers out of that pick-and-roll action. Throughout preseason he burst the Celtics into the the offensive end. Brad Stevens often utilized those kind of pacing point guards like Phil Pressey, Shane Larkin and Tremont Waters in spurts during his head coaching tenure. Pritchard brought a more broad impact, but his success last winter stemmed from him being able to get a stagnant offense moving.

The Celtics correctly critiqued his point guard skills after year one. Pritchard’s core fundamentals, like his jump shot, that other players need to perfect coming into the league already solidified through home school and Oregon. Pritchard, however, posted 0.75 points per possession as a rookie, ranking in the 27th percentile of NBA players. Compare that to Jayson Tatum, Jaylen Brown, Walker and Smart, who all created at least 0.90 PPP (which is measured between 0-2).

Part of succeeding in those plays, as Brown and Tatum evidenced, is leveraging your own skills to become a scorer. Pritchard’s sharp, tight dribble allows him to get to any spot he wants with enough time to set himself and fire. His percentage of unassisted baskets increased to 45% this month, compared to 36% last season and 37% last preseason.

He also utilized a former Walker-Stevens favorite, bouncing around screens and hand-offs into a pull-up jumper in the lane. Pritchard needs to build on a 30.9% three-point percentage on pull-ups, but the Celtics have emphasized ball movement to the point where 30 of the team’s first 33 threes this preseason were assisted.

It’s Pritchard’s pure three-point shooting, especially in catch-and-shoot situations, that makes him a must-play candidate. He tied for 21st among players with at least 240 three point attempts at 41.1% with Paul George and Julius Randle. Only Joe Harris, Marcus Morris, Joe Ingles and Seth Curry converted a greater percentage of catch-and-shoot threes (min. 160 attempts) than Pritchard’s 46.7%. He narrowly beat out Michael Porter Jr.’s 46.5%, albeit on 121 fewer tries, that helped get Porter paid $207-million this offseason.

And Pritchard is doing it from long-distance, increasing his shots between 25-29 feet, where he converted 41.3% last year, from 2.6 to 3.3 attempts per game. This preseason, he converted a startling 7-of-10 from that distance, topped by only OG Anunoby (9-of-12), among players who attempted 10.

“I’m just trying to expand my game every offseason,” Pritchard said early in training camp. “Throughout every day I’m trying to work on different things to keep on expanding my game. For me, I’m comfortable with that shot, so if it’s there, it’s a good shot, you’ve got to take it. That’s all we try to do as players, we work on your different shots and getting comfortable and confident.”

While not yet a floor general, Pritchard’s ability to draw defenders in space will open up others and allow him to naturally distribute, much like Tatum. Playing with Robert Williams III often as a rookie and Nesmith throughout the summer quickly acclimated him with the spots they enjoy.

“He’s done a good job of getting his teammates involved,” Nesmith told CLNS last week. “I think Summer League was huge for him in that regard, being able to run the team, run the plays, call everything, kind of be the main point guard on the team definitely benefited him. And figuring out where guys will be, guys’ tendencies, where to get guys the ball. So I think he’s definitely improved on that a lot.”

Pritchard’s problem typically comes, at 6’1″, when he gets swallowed up in the lane. Mo Bamba made it difficult for Pritchard to see over the back line and blew up several pick-and-roll actions. Pritchard, who made the second-most passes to Williams III last year, only found him once for a kick-out for a jumper on Thursday.

“I think we missed Rob there on a few drop-offs or lobs,” Udoka said. “But (Pritchard) adjusted well, obviously the shooting threat is always there with him, but just really want him to learn the position, take the challenge on the defensive end and I think he’s done that through Summer League and training camp.”