Domantas Sabonis allows the Celtics to round out a core with Jaylen Brown and Jayson Tatum, inspire offense and consolidate assets. 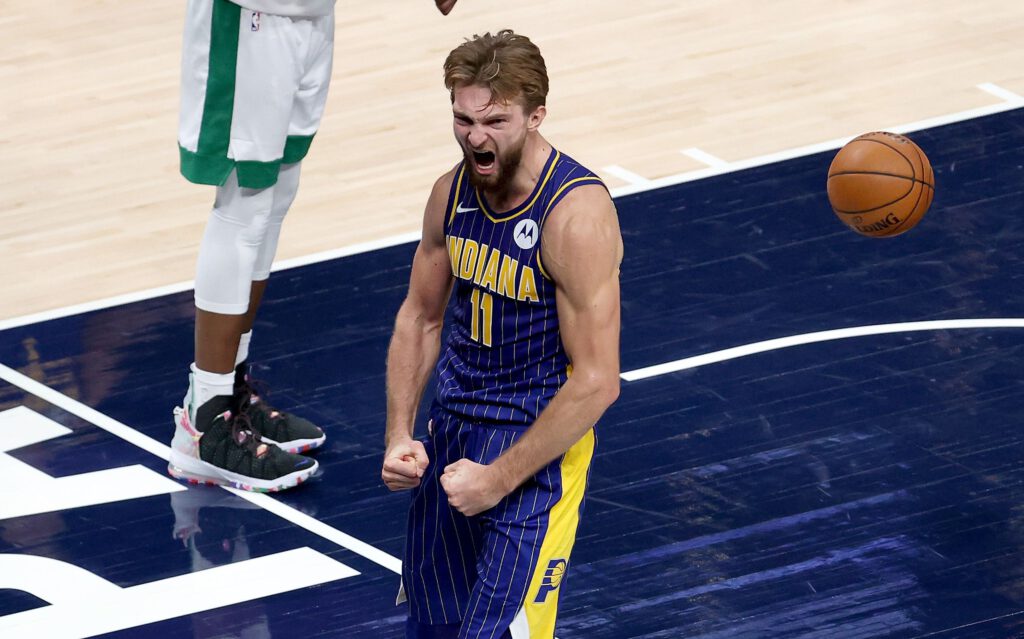 INDIANAPOLIS, INDIANA - DECEMBER 27: Domantas Sabonis #11 of the Indiana Pacers celebrates after making the game winning shot against the Boston Celtics at Bankers Life Fieldhouse on December 27, 2020 in Indianapolis, Indiana. NOTE TO USER: User expressly acknowledges and agrees that, by downloading and or using this photograph, User is consenting to the terms and conditions of the Getty Images License Agreement. (Photo by Andy Lyons/Getty Images)
Share
Facebook Twitter Email

Jaylen Brown looms large over the Celtics’ future. That’s to say Brown’s health, development and ability to mesh with Jayson Tatum will dictate this group’s ability to win a championship in the future. It also pertains to his value around the league. When trade possibilities emerge, rival teams will target Boston’s star.

That’s a difficult negotiation position Danny Ainge knew for years. As Jimmy Butler, Paul George and Kawhi Leonard hit the market, the expectation became Boston would have to give up a Jay to make a deal. With Tatum now etched in as the Celtics’ cornerstone, all eyes point toward Brown, as the 76ers’ reported negotiation with Boston showed.

The Celtics tried to address this by solidifying the middle class of salaries of the roster. Even if Marcus Smart, Robert Williams III and Josh Richardson wouldn’t become targets in potential trades, their higher salaries would both keep them in Boston longer, and give the team multiple avenues to make deals. Brad Stevens said it over and over — flexibility. Now, his first opportunity for a splash emerged, with Domantas Sabonis becoming among the Pacers reportedly made available in a potential rebuild.

Moving Sabonis, the 25-year-old, two-time all star signed for two more seasons beyond this one, would demand a sizable return. Perhaps a godfather offer. That makes it hard to imagine Pacers GM Kevin Pritchard relinquishing an almost-certain demand to get Brown in any potential negotiation. Sabonis is a lead playmaker, scorer and rebounder for Indiana. They’d need a prospect to build around to give him up.

There may be players to consider moving Brown for. Sabonis isn’t one of them. The power in acquiring him would come from his ability to occasionally initiate and regularly facilitate offense from the four or five positions in the flow of the offense, unlocking Brown and Tatum with the attention Sabonis would draw from defenses. He’s a player who naturally inspires pace, cutting and passing on the offensive end.

He’s also a spooky defender, at times looking off-balance in space. He plays hard and has the size to occasionally block shots, but it’d be important to keep another defensive five like Horford next to him. The hope for Boston in this trade is Sabonis continues to develop, accentuates the Jays, proves healthier than Williams III and more versatile on offense.

Ime Udoka loves to attack mismatches, post-up, facilitate some offense through the big men, pass heavily, hunt open shots and run the fast break. Sabonis fits perfectly with all those tendencies that we learned early this season. Udoka’s also a defensive coach who has a double-big lineup rolling on that end.

Sabonis can pressure the rim on the ball in ways Boston can’t right now, and make plays out of the post from the perimeter. For a Celtics offense that struggles to generate shots at the rim, he’d provide a relieving outlet — and he has room to grow. He’s shooting a career-high 65.4% on two-pointers, draws over four free throws per game and hits 76.1% at the line.

In his two seasons where he shot over 100 threes, he averaged 32%, leaving some hope there, though this year’s showing he’s not a Horford-like floor spacer. Sabonis grabbed 12 rebounds per game each of the last three seasons, while averaging 5.5 assists per game.

Many would argue Sabonis and Myles Turner both suffered developmentally from years of playing together. He hasn’t been a perfect Rick Carlisle fit. Sabonis played under three coaches each of the last three seasons, a revolving door of perimeter players and largely had Indiana’s offensive fortuen rested at his feet, and he’s made them a league average offense. It’s curious that the team seems to view keeping Sabonis or Turner as something of a coin toss. Perhaps it stems from the hope that Sabonis could draw a larger package from another team to initiate the rebuild. We all remember during the Gordon Hayward free agency saga how contentious Turner’s value became in that negotiation.

Turner doesn’t help the Celtics now, after Robert Williams III emerged in a similar position and Al Horford returned at the four and thrived. Turner may block shots and defend at an overall higher rate than both, but not enough to make an aggressive offer for him. Sabonis, however, projects to have his impact grow in a smaller, complimentary role next to perimeter stars. Any defensive concerns could be alleviated by playing in a system alongside point-of-attack defenders on the wings. So what would it take to acquire him?

Without Brown to include as the centerpiece, it stands to reason the next most-enticing talent to Indiana would be Williams III. He’s 24-years old, playing regularly and better than last season, fouling less and one of the more intriguing defensive, playmaking, young pick-and-roll finishers in basketball. The Celtics also signed him to a four-year extension that averages $12-million per season.

The poison pill provision that sends Williams’ current rookie scale contract out in a deal as a figure closer to his extension value ($10.3-million) doesn’t disrupt this deal, since Williams’ new salary figure isn’t a massive leap from his current one ($3.6-million). Sabonis makes $18.5-million, so Juancho Hernángomez’ salary ($6.9-million), along with two of Romeo Langford, Aaron Nesmith or Payton Pritchard works money-wise. 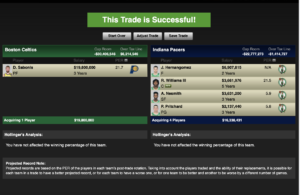 As for value, the Celtics would also need to entice Indiana with some amount of draft picks. The Celtics own all their future first-round picks and few of their future second-rounders. They’d likely need to trade at least one pick in the short-term, a future pick swap and maybe a distant future pick with protection.

The Sabonis asking price will be dictated by what other interest there’d be for the big man. The Spurs could trade a young guard like Derrick White, but likely wouldn’t dive into future picks as rebuilding team themselves. The Wizards have multiple young players like Deni Avdija and Rui Hachimura, but are hard-capped by the Spencer Dinwiddie trade. Pascal Siakam is more expensive than Sabonis, and Indiana previously fell short in Ben Simmons talks. Some playoff teams like New York have a four. Teams like the Lakers don’t have picks or a path to match his salary. That tells me it’ll fall below the potential Lillard demands from Portland.

The Kings would probably be the most competitive suitor alongside the Celtics, able to offer a young like Davion Mitchell or Tyrese Haliburton, but would also need make a risky decision on a promising player and future picks. There also isn’t urgency for Indiana to make a deal, with Sabonis signed long-term.

The Celtics can’t have it all, unless some star improbably forces his way to Boston James Harden-style. Any dream of Zach LaVine or Bradley Beal arriving continues to falter as the fortunes of the Bulls and Wizards improve. Many deals would gut too much of the Celtics’ depth to be worth it. Any Brown-for-one player flip is a lateral move, and a worse one long-term. Boston’s at a crossroad, nonetheless, with the flexibility to make a splash, no clear path to one and a core that’s now 49-48 since the beginning of the 2020-21 season.

Alarm bells aren’t ringing yet. There’s a case for Boston to pick a direction this year though, whether that’s stepping up aggressively for a player like Sabonis, or selling high on players like Horford or Dennis Schröder closer to the trade deadline if the Celtics remain in murky playoff position in a strong seller’s market. Taking a step back, in favor of acquiring future draft assets, is a precarious move amid an already-tense and challenging atmosphere Brown and Tatum have assumed the reigns of the franchise in. The east is only getting better. They need support.

Sabonis would provide it, while consolidating many of the Celtics’ young players who haven’t broken through and contributed, and picks that project to fall in the middle of the first-round. It’s hard to draft, develop and rely on young players as part of a championship team. Any window of high-level contribution for the Celtics’ 2022 first-rounder, for example, likely expands beyond 2023-24, not to mention picks beyond that.

Brown’s signed through 2024. Tatum has a player option in 2025. Sabonis falls in line with their age, contracts and would continue to be a valuable player for the Celtics for years to come. Picks and uncertain prospects all depreciate, as Ainge showed in holding on to many of those selections.

Boston’s in a different place now that makes trading future picks beyond the possible window of the Jays risky. But this isn’t a Paul Pierce and Kevin Garnett Nets situation, nor is it the Clippers or Nets adding Paul George and James Harden. By rounding out a trio of stars now, the Celtics increase the chances those players are still here and Boston’s winning when those future picks convey.

Would Williams III be hard to see go? Certainly after games like last night’s in LA. Could giving up multiple future firsts look stupid if Indiana finds the next star with one of them? Definitely. The Celtics already have their stars though. The hardest part is done.

They already benefited from the Brooklyn deal. They lined themselves up for a star to become available and support the Jays, so it’s incumbent on them to take the risk to get the deal done, especially if it allows you to keep Brown, Smart and other core players.

Maybe Indiana draws a hard line in the sand and it’s Brown or bust. In that case, you remain patient, but why not do whatever else it feasibly takes? That’s the benefit of having young players like Williams III, Grant Williams and others finally showing something.