Manning: Gordon Hayward Is Not a Problem for the Boston Celtics 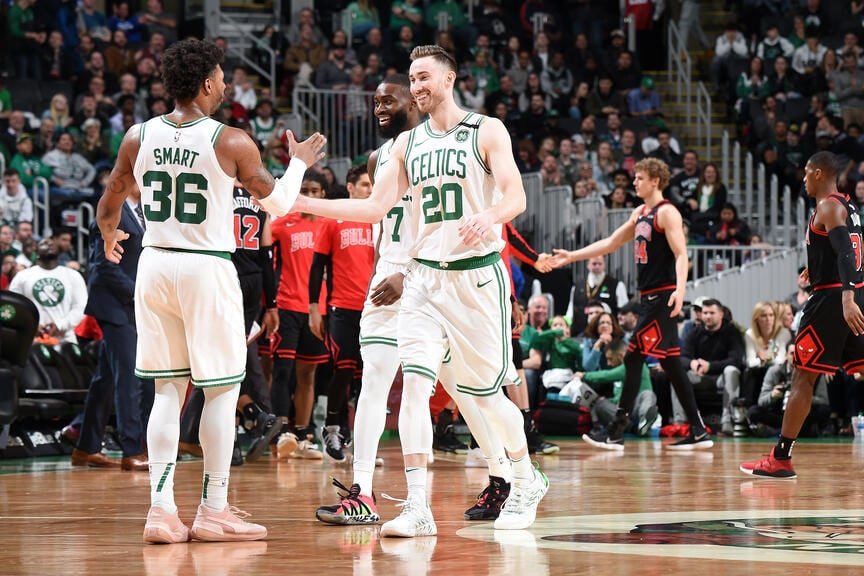 The visual brought back the trepidation that surrounded Gordon Hayward throughout last season. As he leaped to the bucket late Phoenix, having broken coverage completely on a side in-bounds, he hesitated midway through his leap and bricked a layup attempt off the back of the rim.

Phoenix led 116-111, securely ahead even with the constant threat of a Marcus Smart three on his record-breaking night. Mikal Bridges provided that lead, scorching Jayson Tatum from the corner to shoot uncontested inside near Daniel Theis on the previous possession. Hayward’s miss, while an obscene lowlight, proved inconsequential. Bridges already scored 26 points to support Devin Booker’s 39 while the Suns dropped 123 on Boston.

A film session revealed what became the Celtics’ biggest issue through their worst swoon of the season. Ball pressure, attention to passing lanes and defensive effort on the perimeter withered through six losses in eight games. The Celtics had propelled to third in defensive rating through January thanks to aggressive perimeter defense. Eight games lowered them to fifth place, 1.6 points worse per 100 possessions.

“We were not allowing the ball to get to the paint before you feel pressure,” Stevens said after Boston righted itself with two blowout wins. “I’ve said this all year, if (opponents) catch it on the block without resistance. If they catch it inside the three or at the three-point line without resistance, we’re in trouble … our best rim defense is keeping the ball away from it.”

That was not the case when Bridges securely handled the ball in the corner and blew by Tatum. Instead of addressing that, a question flew from press row reflecting the panic in Celtics nation over two bad games. Stevens struck back, “maybe we just overreact to a game or two.” And the crowd sure did, with calls ranging from trading Hayward for another piece to simply dumping him.

That comes as he’s tied for his fourth-highest points per game total (16.1), posts a career high in rebounding (5.9), dishes as many assists as any season in his career except 2013-14 (4.1) and shoots a career-high 56.7 eFG%. His start to the season warranted all-star selection, since returning from injury he’s still shooting 47.7% from the field and 34.8% from three.

Boston, through its 2-6 stretch, gave up less points per possession with Hayward on the court than with Marcus Smart, Jaylen Brown or Jayson Tatum playing. Adam Taylor broke down his impact excellently this week, receiving praise from Robyn Hayward.

It’s evident why blame flows toward him. Hayward makes $32.7 million this season, second-most on the team and 15th-most in the NBA. Some don’t deem him worthy of that figure and seek alternatives.

They forget the concept of sunk cost. Boston signed Utah’s Gordon Hayward and lost that within six minutes. Stevens still receives excellent wing production from a player that allows him to run his system effectively.

If Boston traded Hayward for Andre Drummond, as some propose, they would pair a non-shooting big with, Semi Ojeleye? Javonte Green? Those who feel Marcus Morris deserved run over him from the beginning of last season carry ammunition. Morris now plays in New York.

Quality wing play doesn’t grow on trees and only 12 wings boast better eFG% than Hayward, who ranks 25th in the entire league. None of the players above him are named Brown or Tatum.

Concerning foot pain emerged around the time he broke his hand that he admitted could become an ongoing problem. That’s scary, though complications stemming from what looked like a career-ending injury were expected.

Despite those concerns, Hayward is an immediate asset and in no way a long-term contractural burden. He makes max money for one more season if he opts into his player option. Given his play this season, despite shooting below 50% in eight of his last 16 games, we should all be rooting for him to opt in.

“Not a tough pill,” Marcus Smart tweeted, responding to someone consoling Hayward for his layup miss. “Every player has been here. He’s a great teammate and a great player and what he does for our team is immeasurable! Love our team!”