The Celtics might end up needing to trade Jaylen Brown whether he demands a deal or not if they can't improve the roster around him and Jayson Tatum. 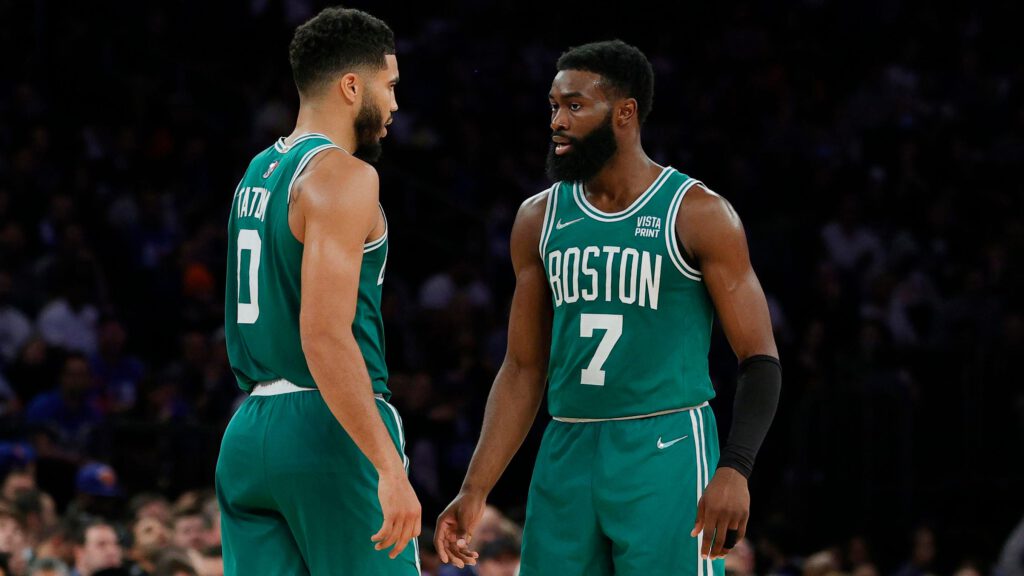 The Celtics balance an array of realities primed for stagnancy entering the NBA trade deadline.

They’ve developed defensive cohesion, winning 9-of-13, with Marcus Smart in the middle of their success on both ends of the court since returning from injury and COVID-19. Don’t let a softer schedule and streak of consistency fool you. The Boston Celtics remain far from a championship.

They face luxury tax restrictions, reportedly seeking a Dennis Schröder trade that won’t bring back salary in return. Josh Richardson could net draft compensation alone, while Al Horford’s hefty contract would render any move on him a dump, with the Celtics needing to pair him with assets. Keeping those veterans doesn’t make-or-break Boston’s season outcome. Packaging their contracts with assets to improve would signal needed urgency. Could they give up picks to improve? Players like Harrison Barnes who could help them for multiple seasons to come are available. Something has to give for Boston to get talent they need.

Could they try moving Smart to shake up the mix? I wouldn’t count it. Taking on money can be a path to asset accumulation or opportunities. That’s even less likely. If picks don’t work either, that leads us back to the top.

The most startling outcome to roster stagnancy emerged when Steve Bulpett reported Tuesday that Jaylen Brown could ask out if Boston doesn’t play to its potential, which only further affirms the clock is ticking. Brown’s contract, which has two seasons remaining after this one, already should cue the need for the front office to improve drastically into the near future. If they’re unable to make anything happen, Brown volunteering himself as the shakeup would make a difficult decision easier. If a player wants out, it’s better for them to reveal that information earlier rather than on the eve of their free agency. It’d still be organizational failure to get there.

“We have to commit and just be more focused than ever game-to-game,” Horford said after the Celtics beat the Heat by 30 on Monday. “Right now in our locker room, Jaylen’s the one that’s really setting the tone with that. He’s really keeping everybody focused, telling us, ‘we need to be focused. We need to lock in. We need to prepare for these games, take care of the game to game things.’”

Boston may be able to shake up the underbelly of youth on the roster by reassessing the Romeo Langford and Aaron Nesmith projects. Shaving off some the roster’s edge could set the table for transformative moves in the offseason. If the Celtics can also begin what’ll inevitably involve several steps back to contention, they should take advantage of any opportunities that arise now. Bogdan Bogdanovic, Norman Powell, Jusuf Nurkic, Buddy Hield and Barnes could all help solve some issues in Boston. John Collins could be a third star.

Brown, in the midst of a season slightly behind his last one, is seeking his first playoff appearance since the NBA Bubble after he missed last year’s stretch run with wrist surgery. He’s aimed to improve his ball-handling, leading an overtime victory with no turnovers in over 40 minutes earlier in January over Indiana. Since returning from a a hamstring injury he returned too early from that disrupted the first quarter of his season, he’s averaging 26 points per game on 45.7% shooting. No NBA player hit more shots between Dec. 13-Feb. 1 (234).

Confidence oozes from Brown, who never caps his potential or standing alongside fellow all-star Jayson Tatum. In four games with Tatum missing around New Year’s Day with COVID, Brown averaged 32.5 PPG, but his turnovers exploded (5.5) past his assists (2.8). Brown eventually turned his AST:TO ratio positive (114:108) late in January, balancing his scoring aggression against the sloppiness that could prevent him from being a primary playmaker. His key defensive lapse against Robert Covington helped blow a recent game to Portland. Everyone’s accountable in some way right now.

“You can kind of see him stepping outside his comfort zone,” Richardson said, adding that he’s urging Brown on in those moments. “Speaking in huddles. I think that’s good coming from one of your top guys.”

Brown has also settled into a finishing role, rather than initiating alongside Tatum over the last five games, where he’s played his best basketball of the season (26.8 PPG, 7.6 RPG, 2.4 APG, 2.0 TOV, 48% FG). They’ve shared the ball, emphasizing ball movement, downhill activity, pace and defense that’s become in play for the top unit in the league.

“(Brown)’s come a long way,” Smart said. “Obviously, he still has some ways to go, but he’s come a long way from that guy that just looks like he’s running out there with his head cut off. To reading the game, calling out the game the right way. And that’s just only going to continue to make him better and his team better.”

Brown and Tatum had a conversation, getting on the same page amidst Boston’s worst play last month. As Tatum embraces a quieter contrast to Smart’s fiery leadership, with Horford providing a lead-by-example veteran presence, it’s encouraging to hear Brown breaking out and speaking with some urgency. Someone needs to, with most of the team following Brown and Tatum’s lead. Some of that can happen in the room and on the court. Brown and Tatum have also built the cache to pressure the Celtics at an organizational level.

A Schröder dump alone won’t look like a teardown. It’s also not enough. If the Celtics do end up clearing out their veteran role players, without an encouraging return or clear path to future activity, it’ll only further pressure Brown and Tatum. Scrutiny, fairly, has ramped up toward their uneven play this season, while Brad Stevens potentially seeks to reverse his three big offseason moves, reflecting a franchise without a clear direction in recent seasons.

The need for shooting has been a constant theme between Ime Udoka and Stevens. Finishing problems hurt Brown and Tatum’s passing numbers, despite their efforts. Meanwhile, Smart, signed to be the team’s point guard, hasn’t received that opportunity consistently within Udoka’s free-flowing system. Shooting, ball-handling and decision-making continue to plague the offense, while Smart seeks a larger role in the solution. The Athletic has reported staleness and a lack of response to Smart’s approach.The coach empowered his stars to make decisions and lead on the floor, and they haven’t always chosen to trust Smart in crunch time.

Smart could be a solution to some of their challenges in the clutch (Boston is 9-17 there). If he’s not on the ball, Smart and Schröder become relegated to catch-and-shoot finishers away from the pressure Brown and Tatum receive. So will the Smart experience ever work? The need for a shakeup feels overdue if he won’t be empowered.

Even considering recent success, the Celtics haven’t progressed beyond a .500 pace while some of their younger and bench players stagnate. The Bulpett report only points toward Boston needing to get its act together now, but with Chicago, Brooklyn, Cleveland, Milwaukee, Philadelphia, Charlotte, Atlanta and Miami rising as east powers around their own stars, what is Boston’s potential? Annual play-in tournaments before entering round one as an underdog?

A future trade demand by Brown could lead the Celtics where trying everything else would anyway, assessing Brown’s trade value. Zach Lowe and others have illustrated Smart’s availability. Robert Williams III looks necessary in Boston, even as he’s grown more valuable and coveted. The rest of the roster would likely land the Celtics draft picks at best, with Bleacher Report linking them, unsuccessfully so far, to Malik Beasley and Troy Brown Jr. Two players who may inch the needle forward for a team miles away. The Celtics also haven’t had consistent outlets for rim looks inside between Williams III and Horford either, which could bail out Brown and Tatum in difficult moments.

The question was never can they play together, they can, but to what end in a situation that’s trended in a worse direction more often than a better one recently? That .500 pace playing out until Brown potentially leaves in 2024 could directly lead to Tatum’s departure in 2025 if they don’t get anything back for Brown.

Boston is Tatum’s team right now. He receives more attention, money, opportunity, years on his deal and typically plays better basketball than Brown. That doesn’t mean Brown can’t lead, thrive and grow elsewhere, he seems primed to, in fact, and it’s an inevitable outcome for two budding superstars, particularly ones who aren’t contending for championships together.

If Brown decides he wants to depart sooner, that understanding could lead to him landing in the best situation for his career elsewhere, and a massive return of depth and players to the Celtics who accentuate Tatum coming back. A new direction.

“Put it this way,” Bulpett wrote, quoting an executive. “We know we’d have to give up A LOT to get a Jaylen Brown.”