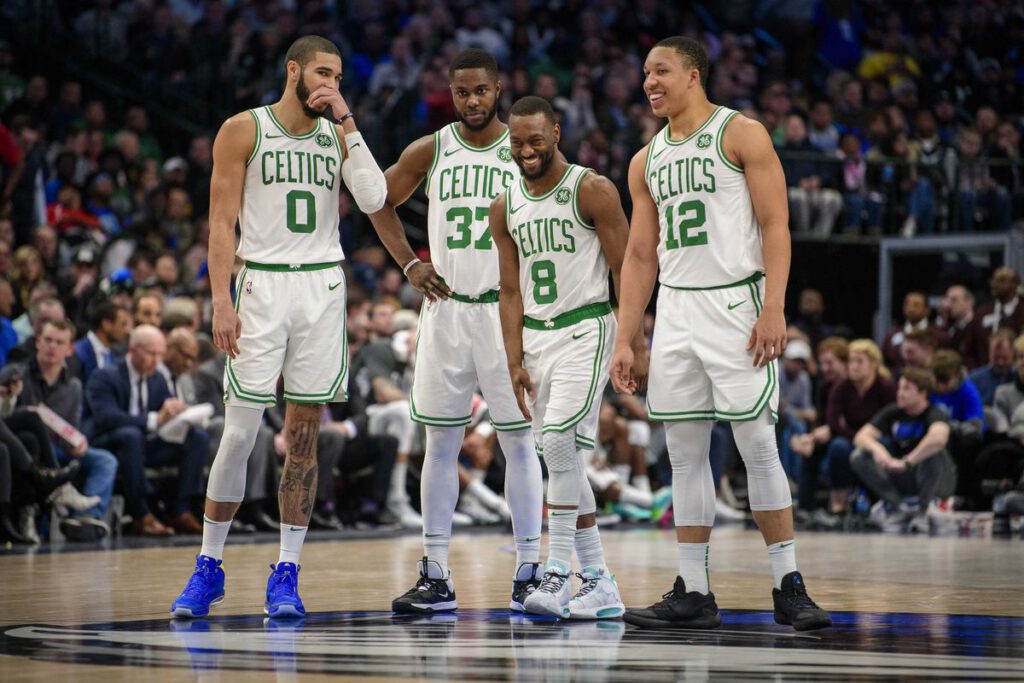 Jayson Tatum made it easy on Kyle and Scal on Tuesday. With Mike and Tommy off, the Boston Celtics’ backup broadcast crew could sit and marvel at the majestic moves Jayson Tatum delivered.

“The net doesn’t even move,” “full head of steam and Jayson Tatum throws it down” and best of all, “he’s salivating Scal. He’s salivating.”

Tatum enthusiasts — Kyle and Scal clearly among them — rightfully mark these past few weeks as a turning point in his career. The young sharpshooter who showed flashes during his first two seasons joined the ranks of the stars. He shined alongside LeBron James at the all-star game, then out-dueled him in an eventual loss to the Lakers. Tatum scored 41 points in that game and followed it with 36 in a win over the Trailblazers. The two games marked his career high in scoring and three-pointers made.

They also showcased a team half built for contention. The other half formed in response to the inevitable Kyrie Irving departure, Al Horford uncertainty and Jaylen Brown’s expiring contract. Kemba Walker’s arrival changed everything for a group hedging on the future.

The Celtics dazzle in ways reminiscent of the Isaiah Thomas years with the credibility to dream of a championship. Walker needs to be healthy and part of Boston’s options to complement Tatum. Concerns about his knee, pain that dates back to Jan. 12, rings of injuries that derailed past Boston seasons. It’s encouraging to see the Celtics approach it cautiously, while troubling the condition persisted beyond past off nights into what required a knee drain. Walker also played in the All Star Game before missing the entire west coast trip.

Tatum can hold it down in his absence. Walker’s playoff availability supersedes seeding concerns. As Sunday showed, the Celtics lack the scoring depth to sustain losing its second-leading bucket getter. Only Portland and Houston receive fewer points per game from their benches.

That’s in part due to the Celtics’ string of injuries. Boston’s missed a starter in all but four games since Jan. 11. Each of their starters missed time during that span, pulling Marcus Smart and Enes Kanter into action and further pulling scoring up from the second unit.

In an unexpected twist, Daniel Theis picked up the slack for Walker against Minnesota in a win that featured four starters scoring over 25 points for the first time since 1990. Complimentary scoring and wing defense represent the only way Boston can reach the Finals. With rookies and a trailing Kanter constituting the bench, depth will not cut it.

Walker needs to be part of the equation, regardless of Tatum’s assumed greatness. In the best game of his career, he shot 1-for-3 in the fourth quarter. The Lakers blitzed him and pulled him off the ball. Kentavious Caldwell-Pope cut him off in the corner to close the win. In a three-point loss, it was easy to imagine any effort from Walker pushing Boston through while its bench scored 11 points.

“They was doubling,” Tatum said after the Lakers loss. “I was just trying to make the right play.”

Boston will eventually need to free Tatum in these late-game situations. Especially in single-possession games where the ball should be in his hands. If we learned anything this month, he is the guy in those spots. The offense naturally funnels shots toward the best shot though. Walker, through the course of the game, and when those finals plays get blown up, gives Tatum that bailout option Boston needs.

The Celtics’ greatest strength is also their biggest reliance. No team has a wing ensemble like theirs, not even the world-beating Bucks. Theirs must stay healthy to have any shot at the Finals, a goal neither Vegas nor this roster construction foresaw in June.