Marchand Gets His Licks In…Again as Bruins Lose Game 4 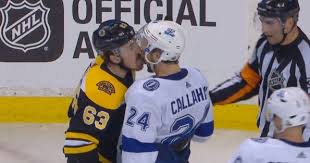 With just 1:21 left in what was a very successful second period for the Boston Bruins, Brad Marchand made his presence felt. He already had an assist and later on, he’d get his second. But this time, his presence wasn’t felt on the scoresheet.

It was felt on the face of Tampa Bay Lightning forward Ryan Callahan.

This was all tongue. You can see it: Marchand’s tongue didn’t just touch Callahan’s face. Marchand licked him like he was a cone with soft-serve ice cream on top.

After the game, Marchand explained the reasoning for his tongue shenanigans.

“[Callahan] punched me four times in the face,” exclaimed Marchand. “He just kept getting close. Nothing big.”

When posed with the idea that licking someone’s face is the same as spitting in it, Marchand was short and sweet, chuckling all the while.

On the other side of the underbelly of TD Garden, the Lightning’s reaction to Marchand’s lick was much different.

“All I’m going to say is that there is absolutely no place in our game for that,” said Lightning head coach Jon Cooper. “I don’t understand it. I don’t.”

Cooper went on to pose a question to the media members to put things into perspective.

“How would you feel if I walked over to you right now and gave you one big lick,” posed a perplexed Cooper. “From the chin and then all the way up.”

No media members were bold enough to answer in favor of Cooper’s hypothetical offer.

Ironically enough, before this series, Callahan was asked on what he’d do if Marchand licked him.

Before this Lightning Bruins series started I asked Ryan Callahan what he would do if Brad Marchand licked him. Here is Cally's response: pic.twitter.com/l4LUIPFvSN

When Bruins head coach Bruce Cassidy was asked if he was worried about Marchand becoming a target, he didn’t seem phased.

“Well, he’s used to that, right?” exclaimed Cassidy. “He’s an elite player, and that’s the line doing a lot of our damage. We’re trying to be hard on [Nikita] Kucherov and Stamkos and their better players, and I think that’s just playoff hockey. As long as it’s within the boundaries of the game, that’s part of gamesmanship, that’s part of playoff hockey. So, that part of it, Brad has to keep his cool. Just keep playing and playing well.”