Marchand, Lightning Head Coach Cooper Have Admiration For Each Other 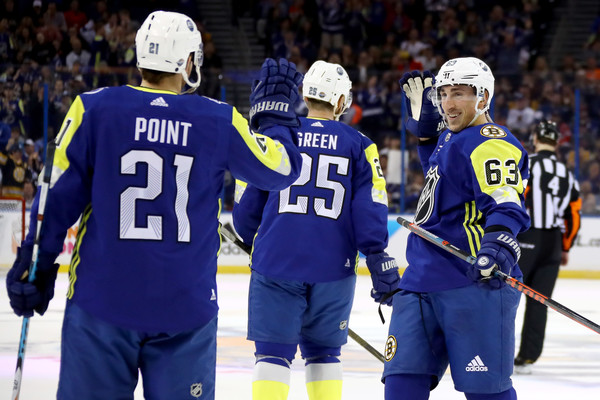 Every team in the NHL seems to have some sort of beef with Brad Marchand. There’s always a reason someone on some team hates him.

But things are different between him and Tampa Bay Lightning head coach Jon Cooper. There’s actually some love between them.

“To be honest, what I have seen of him and what goes on the ice he is a competitive you know what, you’ve got to love that,” said Cooper. “Some of the greatest comments you can give a player is ‘God I hate that kid but I do wish he was on my team.’ Some guys get that.”

Cooper coached Marchand at the All-Star game and had a bit of an enlightenment with the little ball of hate.

“I was fortunate at the All-Star Game to meet him on and off the ice and I spent a little time with him,” the Lightning bench boss explained. “It was actually disappointing. I was hoping he was going to be an idiot. I was hoping I wasn’t going to like him.”

Cooper continued to gush about his new-found bromance with the Bruins left-winger.

“But he was unreal,” exclaimed Cooper of Marchand. “It’s amazing a guy that was that kind of nice and outgoing and friendly was the same guy that jumps on the ice. You’ve got to respect that about him.”

Marchand had kind words to say in return.

“I felt the same way about him,” Marchand said of his new brother from another mother. “He was a very nice guy, very easy-going but I don’t know much about his coaching style and how he deals with guys in the room.”

Every series seems to bring out a new romantic side of Marchand.