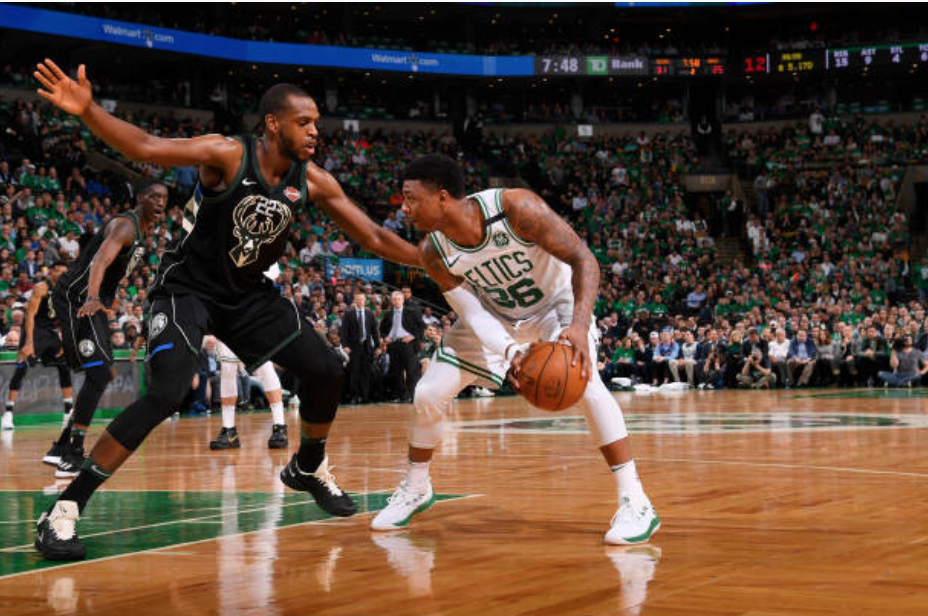 With Marcus Smart returning to the line up for the first time in over five weeks, Terry Rozier getting shoved in a third-quarter skirmish with old friend Eric Bledsoe, and Al Horford pouring in 22 points and grabbing 14 rebounds, the Celtics had plenty of adrenaline flowing through the critical Game 5 at TD Garden. The Celtics found a way to hold off the Bucks, 92-87, Tuesday to take a 3-2 series lead. Boston can advance to the second round with a Game 6 win in Milwaukee Thursday night. If the Bucks win Thursday, Game 7 would be back in Boston Saturday.

“It means a lot for our team,” Horford said of Smart’s return. “I think I said it early in the year that he was kind of like the soul of our team. Everything that he brings, his toughness, unselfishness, hard nose player and we fed off his energy tonight. I felt like the crowd fed off of it, we fed off of it and it’s just good to have him back.

“This has been a genuinely a nice surprise for our group because I didn’t think he was coming back, I didn’t want to get my hopes up even when I heard it was a possibility. We’re just happy to have him back and he had a huge impact on the game tonight.”

Click here for a full box score of Tuesday’s Game 5.

From the moment he walked off the bench and headed to the scorer’s table in the first quarter, Marcus Smart had a substantial and powerful impact on the Celtics and their energy all over the court. His final huge moment came with 30 seconds left, when he scrambled with three other Bucks for a loose ball and found an open Horford for the layup with 28.1 seconds left.

“I just made a play, I made a quick play,” Smart said. “I saw him trapping, I saw Al (Horford) he was coming hard and you got three guys on you, but I just tried to make sure I got him the ball and it was going to take everything I had. I just made the emphasis that I was going to make a play and get it to Al when I was on the floor and they weren’t taking it from me.”

A game after the admission by the NBA that Jaylen Brown was fouled when he was stripped of the ball in Game 4, it appeared the Bucks were the ones ready to cry foul in the waning moments of Game 5. Al Horford appeared slow to get his missed 3-point shot up with 1:16 remaining as the shot clock expired. The Celtics got the loose ball rebound and were able to kill more time, leading 84-79. Referee Ken Mauer said the league cannot review unless the shot is made.

“The rule states that under two minutes we are not allowed to review a potential 24-second violation unless the ball goes in the basket,” Mauer said.

Bucks coach Joe Prunty said he thought it was a clear violation and said he was not given a satisfactory explanation by the officials.

Smart checked in for surprise starter Semi Ojeleye (starting for Aron Baynes) with 4:08 left in the first quarter and played the rest of the opening period.

His impact was immediate. He came in and scrambled for a loose ball and created a turnover. With 2:36 left in the quarter, he took an inbound pass from Marcus Morris, converted the layup and was fouled. His three-point play put Boston up, 18-13.

But his most impressive and dynamic play came on Milwaukee’s next possession. Smart was under the basket and read a roll by Matthew Dellavedova, who attempted an alley oop pass to a cutting Giannis Antetopounmpo. Smart went airborne and blocked Antetokounmpo, sending the crowd into pandemonium.

Smart played the first 4:20 of the second quarter, before coming out for Jaylen Brown and the Celtics leading 33-25.

The Celtics carried the energy Smart gave them and the Bucks continued their ice-cold shooting. Threes from Jaylen Brown and Jayson Tatum put the Celtics ahead 43-29. The Bucks shot just 15-of-43 in the first half, with Khris Middleton and Antetokounmpo accounting for 22 of Milwaukee’s 37 points in the first half.

Smart returned with 3:16 left in the first half and the Celtics ahead, 44-29. He played the final three minutes and drove to the basket, got fouled and hit two free throws to end a 7-0 Milwaukee run. His two free throws gave Boston a 48-37 halftime lead.

In 11 first-half minutes, Smart scored five points, had two rebounds, two assists and two blocks. Brad Stevens pointed to the possibility of rust in Smart’s first game since March 11 against Indiana, when he injured the thumb diving for a loose ball.

With 9:33 left in the third quarter and the Celtics in command, 52-39, Rozier ran across the baseline in an offensive set. Bledsoe, the guard who claimed not to know who “the (expletive)” Rozier was after Game 2, shoved Rozier out of bounds.

BLEDSOE SHOVES ROZIER: This is why #Celtics fans were chanting “Bledsoe sucks” Flagrant on Bledsoe and dead ball foul on Rozier. pic.twitter.com/oy6HngIQPm

The Bucks made a run to cut the Celtics’ lead down to four, 61-57, on a Shabazz Muhammad corner three with 3:46 left in the third. But the Celtics immediately answered thanks to a three from Jaylen Brown and a monster alley oop jam from Horford. Brown’s three with 2:25 left in the quarter made it 68-57. Smart fed Horford with perfect pass and Horford’s dunk with 30 seconds remaining capped an 11-4 run and gave the Celtics a 72-61 lead heading into the fourth.

The Celtics went cold to open the fourth and Milwaukee made yet another run to open the quarter. A putback dunk by Jabari Parker with 8:45 left closed the gap to 72-68. It was Smart who provided Boston’s first points of the fourth with a finger roll layup with 8:18 left and stopped Milwaukee’s run at 7-0.

After great ball movement, Rozier kicked it out to Horford, who drained a wide open three with 7:12 left for a 77-70 lead. Marcus Morris drove the lane for a layup with 5:46 remaining for a 79-70 lead. Marcus Smart had another electrifying block but that led to a loose ball that was scooped up by the Bucks and fed to Bledsoe, who drained a three with 3:21 left and it was 81-77.

Now the Bucks must stave off elimination in Game 6 Thursday night in Milwaukee to force a Game 7 back in Boston on Saturday.

“Just win or go home. You can’t leave nothing on the line,” said Middleton, who scored a game-high 23. “That’s pretty much how you play this whole playoffs is leave it all out there. Tonight, we had too many lapses where we just didn’t want it as bad as they did. I feel like the lapses and we had a lot of great looks we just missed. Coming back home it’s win or go home situation. We been in this two years, in the playoffs so we just have to play as hard as we can. Stick to the game plan and adjustments and give it our all.”

Just before the opening tip, the Celtics awarded Kyrie Irving with the Red Auerbach award, given annually to the Celtics player or coach who best exemplifies the spirit of what it means to be a Celtic through exceptional performance on and off the court.

“Since the day he arrived in Boston, Kyrie has been a true Celtic,” said owner Wyc Grousbeck. “He personifies classic Celtic qualities, including unselfishness, leadership and overall excellence. He’s a very worthy recipient of this high honor.”

In 60 games this season, Irving averaged a team-best 24.4 points (8th in NBA) on a career-high 49.1 percent shooting. The seven-year NBA veteran also recorded 5.1 assists, 3.8 rebounds and 1.08 steals in his first season in Boston. Named an NBA All-Star for the fifth time in his career earlier this season, Irving finished 2017-18 as one of three players to average 24.0 points while shooting at least 49 percent from the field and 40 percent from beyond the arc (Curry/Durant). He’s just the second Celtics player in franchise history to accomplish that season-long feat, joining Hall-of-Fame forward Larry Bird.