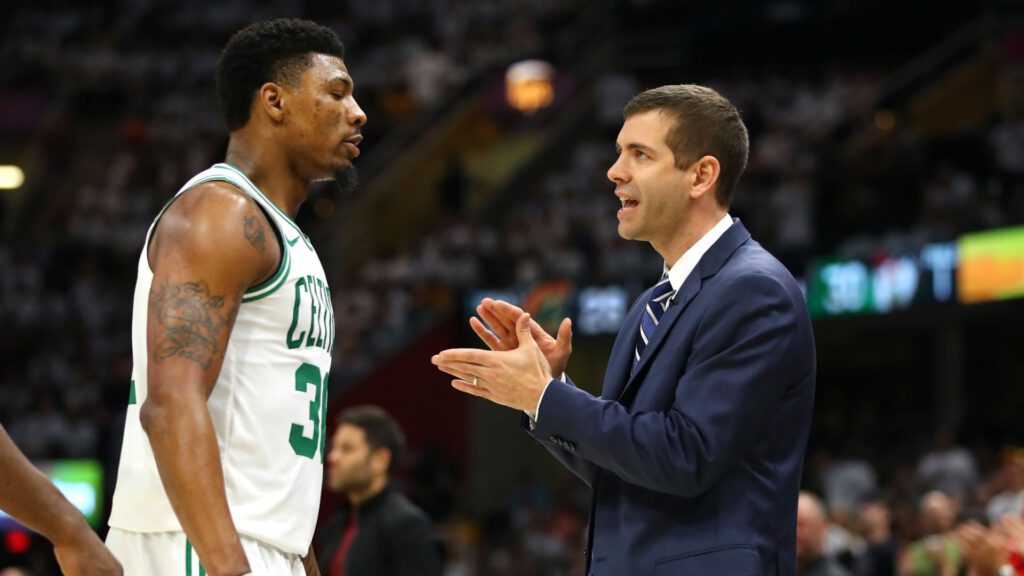 Marcus Smart spoke out about the officiating in Thursday night’s game against the Hornets and shared a conversation he had with head coach Brad Stevens following the Celtics’ 108-87 win in Charlotte.

Smart, who picked up his fifth foul in the third quarter, expressed his frustration with the calls to Stevens, who according to Smart, was reluctant to step in and fight for calls on Smart’s behalf.

“I just was telling him, especially when everything is going that way, like, they’re just picking and picking (on Smart) and it’s like they’re eyeing on me and it’s like they are doing it on purpose,” Smart said. “So I’m telling (Stevens) like, ‘At some point you have to step in and say something as a coach. But since you won’t, I’ve go to.’

“I understand Brad’s standpoint but at the same time, from a player’s standpoint, you’ve got to step in.” (NBC Sports Boston)

Stevens addressed what happened between him with Smart, and pointed towards the bigger picture — just how important it is for Smart to do his best to stay in the game and not risk a possible ejection by getting into heated arguments with the referees.

“We need Marcus and I’ve told him a number of times how much we need him,” Stevens said. “But this is the part about Marcus that I love, right? His fire, his competitiveness. If there’s a moment when he’s upset with us that’s all part of it. We move on pretty quickly. We’ve been together for a long time. I’ve been yelled at before and that’s OK. I love him and trust him.

Marcus Smart picks up his fifth foul in the third quarter and is still PISSED when he gets pulled ? pic.twitter.com/kVSOZUP8xr

“Again, we’ve been through a lot together so I just think it’s one of those things where, he knows how important he is to our team and, listen, he’s going to be the guy that — he gives a lot to our team. He does a lot of things that are really hard but don’t always get the attention by some. I think we do a good job in Boston of recognizing all that he does and certainly, our team and our staff recognize all he does.” (NBC Sports Boston)

Hornets forward Miles Bridges didn’t make things any easier when he pushed Smart to the ground a few minutes into the fourth quarter. Smart quickly jumped up and confronted Bridges before the two were separated by officials.

No foul was called against Bridges.

“I wish they would call the game the right way, you know?” Smart said. “A lot of calls that they called, I didn’t understand where the fouls were. And it just seems like, whenever I get the ball and I’m on offense, I can’t get a call.”

It wasn’t until after the altercation ensured that there was a call made. After a video review, Bridges was issued a technical foul.

Smart, who’s made quite a name for himself around the league as a gritty, physical defender, believes things would have been handled differently if the roles between him and Bridges were reversed.

“I told (the officials), I said, ‘If it was me, ya’ll would probably throw me out of the game and everything. So you can clean it up, or I will. I allowed ya’ll, I gave ya’ll the time, ya’ll keep telling me to let us handle it, let us handle it, I’m coming to ya’ll first, but at some point as a player, as a man, you’ve got to protect yourself.’

No word yet if the NBA will come down on Smart with a fine for his comments against the referees. If so, Smart is ready for the league to dock his paycheck with the hope that officials will approach him, and the Celtics, differently because of Thursday’s altercation.