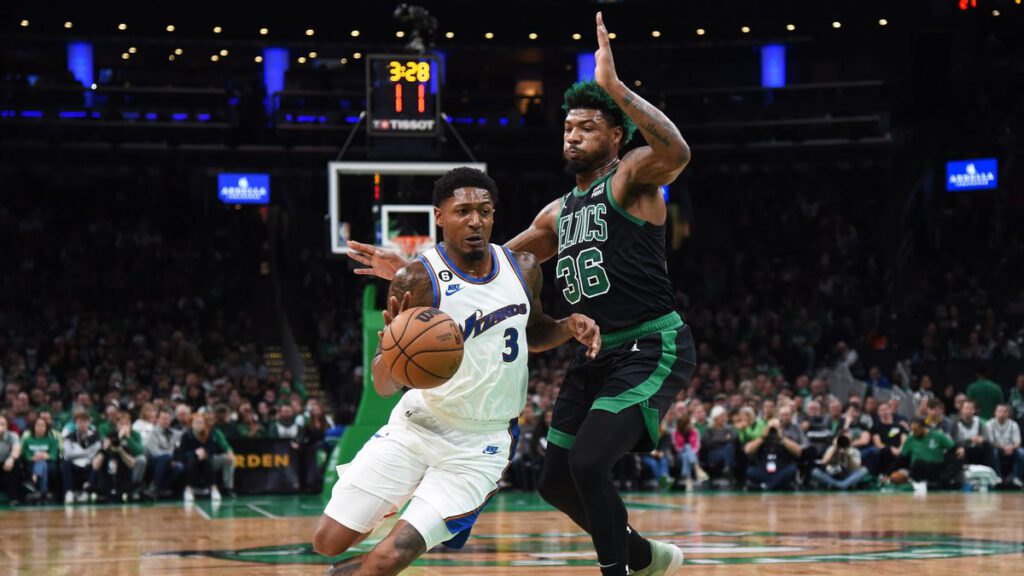 BOSTON — From the outset, Marcus Smart didn’t anticipate beginning the 2022-23 campaign without his starting center, Robert Williams — he told reporters after beating the Wizards, 112-94 on Sunday — the Celtics’ fourth win in six tries, as Boston attempts to restore its defensive identity of last year in the absence of its NBA All-Defensive big.

However, watching the Celtics tip off a new season without Williams in the lineup on Opening Night was the least surprising mishap for an organization that was, and still is, recovering from a tumultuous September where we watched its offseason signee Danilo Gallinari tear his left ACL, and the Celtics suspend head coach Ime Udoka for violating team policy. Adjusting to life without Rob hasn’t been easy for the reigning Defensive Player of the Year and his teammates.

“Coming into this season, we were planning everything to expect to have him,” Smart said after Sunday’s win. “So, we had to change things around.”

After a disappointing 132-123 loss in overtime to the Cavaliers — a game where the Celtics blew a 15-point lead and surrendered a combined 82 points to backcourt duo Donovan Mitchell (41) and Caris LeVert — beating the Wizards was undoubtedly a step in the right direction. Holding All-Star Bradley Beal to 0-for-12 attempts for nearly three consecutive quarters triggered nostalgia; it’s been a while since the Celtics have done something like that to a player who averaged at least 23.2 points last season.

Beating the Wizards also signaled the first time the Celtics have held an opponent to fewer than 100 points this season. On Sunday, Boston entered TD Garden with the fifth-worst defensive efficiency rating (1.157) while giving up 117.6 points a game, per Teamrankings.com.

For Boston, Smart and other Celtics players in the backcourt, such as Malcolm Brogdon and Derrick White, led the charge on D against Washington. White, featured in interim head coach Joe Mazzulla’s three-guard lineup alongside Smart, and Jaylen Brown, finished with a team-high plus-15 game rating. Brogdon led the second unit with 23 points and four assists.

“We’ve been here before. We’ve played small-ball before and switching everything,” Smart said. “It just comes down to us to do it. A couple of guys haven’t done it. I don’t know how much Malcolm (Brogdon) has, but to be able to come in and adjust the way he has is key for us, especially with Rob out. It allows other people like Luke (Kornet) and everybody else to step up and play roles that they normally wouldn’t play. I’m playing the five if you all can see (laughs). That’s the most I’ve ever played the 5.”

Last year, the Celtics finished the regular season with the best defensive rating in the Eastern Conference, second-best in the league, per Statmuse. Boston’s stifling, hard-nosed, team-oriented approach to defense, coupled with two elite scorers in All-Star Jayson Tatum and Jaylen Brown, propelled the Celtics to reach the Finals.

With a comfortable lead intact, Brown (30) and Tatum (27) played 30 minutes or less while scoring 24 and 23 points, respectively, as the Celtics cruised to their first double-digit win.

“Our effort is always there. We just have to execute consistently,” Mazzulla said after Sunday’s win. “The rebounding is another piece to that, and then, we can do better with defending without fouling. But the overall defense, I think, is something we have to be patient with, at the same time, get better every game.”

“When somebody does come into your house, and they do what they did, (now) we have an opportunity to go back to their house and see them as quick as we can, that we are, we definitely have more detailed-oriented focus, than you had or anybody else, especially that first game,” Smart said of the quick turnaround rematch. “So, they came in. They did what they were supposed to do. We got to do what we’re supposed to do.”