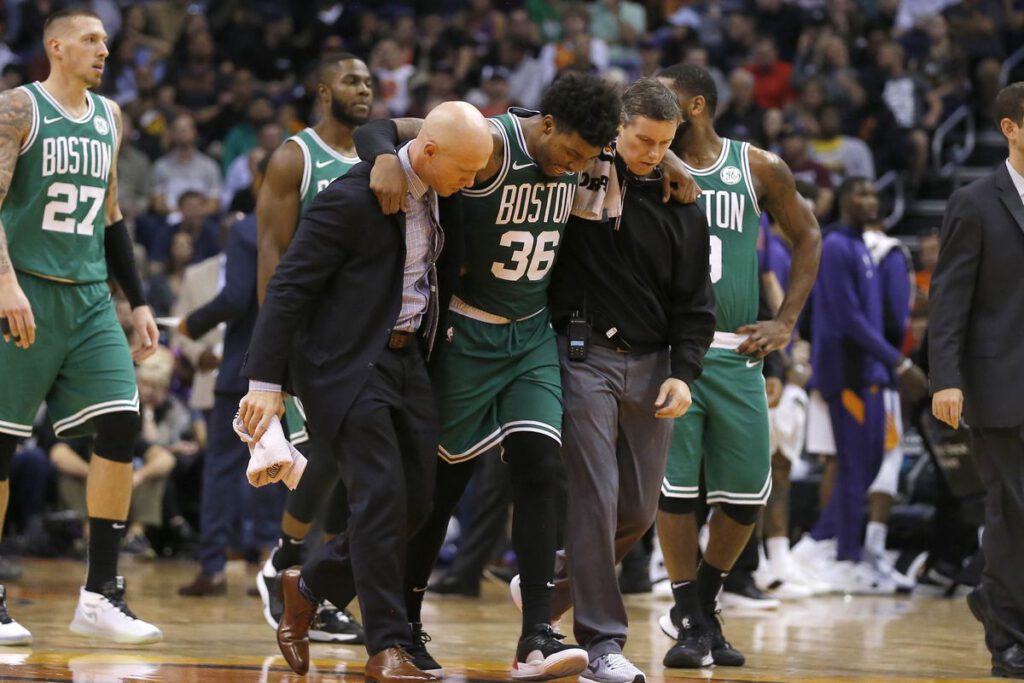 In the final frame of the Celtics’ 99-85 win over the Suns Monday night, Marcus Smart limped off the floor with members of the team’s medical staff and made his way back to the locker room.

Suffering from what appeared to be a right sprained ankle, Smart was ruled out for the rest of the night. He finished with 17 points, 4 assists and a pair of steals.

Marcus Smart just limped off the court after this play pic.twitter.com/1o65jV0Ol4

Celtics head coach Brad Stevens provided an update on Smart’s health with a sense of optimism, following the win in Phoenix.

“Not swollen, not swelling badly,” Stevens said. “We got to check it in the morning and determine if he looks like he’ll be available Wednesday.”

Smart has recently stepped up big for the Celtics, filling in for Gordon Hayward — whose left-hand injury will keep him sidelined until 2020 — in the starting lineup. Smart has become a dependable source of offense in Hayward’s absence.

He’s averaging 14.5 points, 5.1 assists while shooting at a 41.6 percent clip from behind the arc on 8.5 3-point attempts throughout the last six games. And with the Clippers, one of the league’s marquee teams, next on the docket on the Celtics’ five-game road trip, it’s going to be difficult to keep Smart in street clothes Wednesday night.

“The ankle is OK, there wasn’t a lot of swelling,” Smart said after the game. “Minimal swelling for it where I’m able to walk. I’m able to still shift, and plant and move side to side so that’s good. Just re-irritated the exact same ankle I was just coming back from in the exact spot. But everything is OK, I should be fine to play the rest of the trip.”

The Celtics will probably be taking the precautionary route, as they should, prior to Wednesday’s game. There’s no telling what the swelling in Smart’s ankle will look like the morning after but if there are any signs of a significant sprain you can expect to see Smart donned in street clothes at the Staples Center.

After losing Hayward, Boston can’t afford another long-term injury to one of its core players. They’re better giving Smart time to rest and make a full recovery.