Marcus Smart is recovering from a mid foot sprain suffered in Game 7 against the Bucks and is questionable for Game 1 of Celtics-Heat. 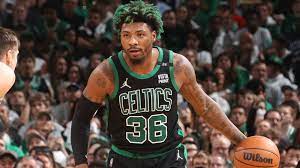 MIAMI — Marcus Smart suffered a mid foot sprain when he collided with Giannis Antetokounmpo in Game 7 vs the Bucks on Sunday, playing out the game before landing in a boot after. The Celtics are treating it throughout the day on Tuesday ahead of Game 1 vs the Heat in hopes that he can play, but Ime Udoka revealed at shootaround that swelling and pain continue to be issues. Kyle Lowry (hamstring) is already out, something Miami is used to, while Robert Williams hopes to return to his normal role with no minutes restriction after suffering a bone bruise in Game 3 last series and missing four games.