Marcus Smart rolled his right ankle pretty bad and is dealing with swelling and pain, as he'll enter Game 4 between the Celtics and Heat questionable. 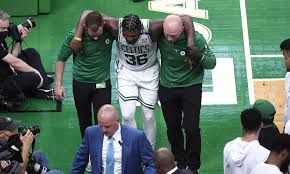 BOSTON — Marcus Smart has a pretty bad ankle sprain, Ime Udoka said at Celtics practice on Sunday ahead of a must-win Game 4 for Boston. Smart fell chasing an offensive rebound early in the third quarter of Boston’s 109-103 loss to the Heat, Smart returning minutes later to a roaring ovation and hit a three. He’s dealing with swelling and pain, already just days from returning from a mid-foot sprain and dealing with quad issues throughout the playoffs. Robert Williams missed Game 3 with swelling and pain in his left knee, the fifth time he’s missed a game in these playoffs with that ailment, and Udoka said he’ll probably be day-to-day for the rest of the postseason. Jayson Tatum, who left Game 3 before returning shortly after with a stinger, is ok.