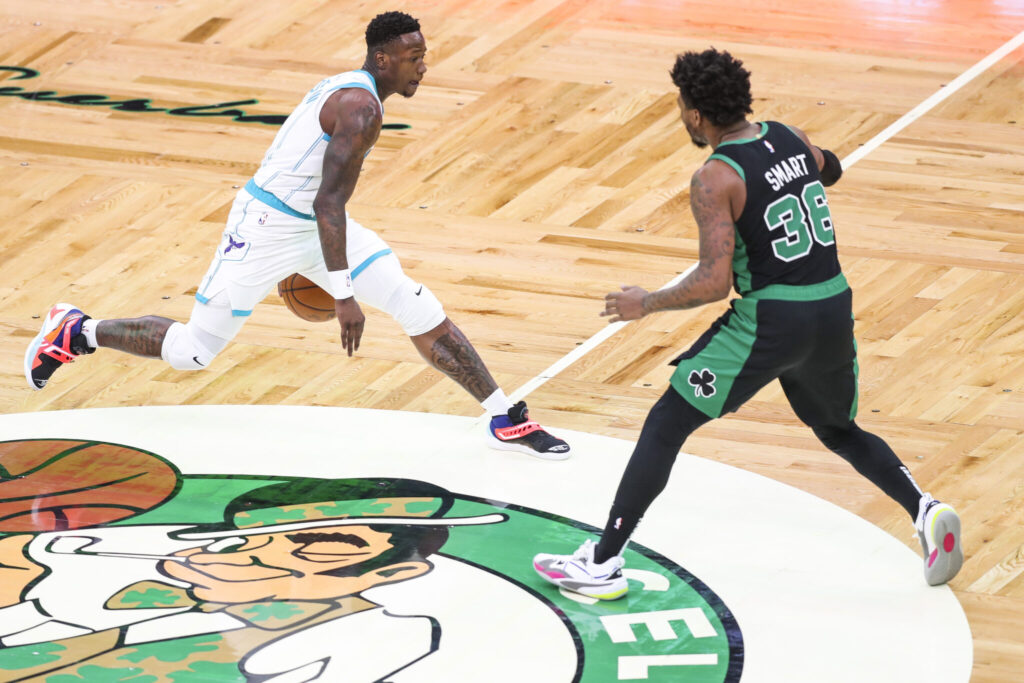 BOSTON, MA - APRIL 04: Terry Rozier #3 of the Charlotte Hornets dribbles the ball while guarded by Marcus Smart #36 of the Boston Celtics during a game at TD Garden on April 4, 2021 in Boston, Massachusetts. NOTE TO USER: User expressly acknowledges and agrees that, by downloading and or using this photograph, User is consenting to the terms and conditions of the Getty Images License Agreement. (Photo by Adam Glanzman/Getty Images)
Share
Facebook Twitter Email

Marcus Smart reportedly heard his name in trade rumors approaching at this deadline. Danny Ainge approached Smart with assurance that the Celtics would not be dealing him, even after six losses in eight games following an 18-game absence to a calf tear.

Smart shot 40% in those games while the Celtics allowed 113.6 points per 100 possessions (24th) in that stretch — with the team desperately needing change. Ainge ultimately added Evan Fournier without transforming the core of the roster, admitting the team felt discouragement inside ahead of deadline day.

Critics also captured Smart’s attention. Smart touted criticism from CLNS Media’s The Garden Report as inspiration following a turnaround weekend for Boston’s defense and overall fortunes. The Celtics beat the Rockets and Hornets by 46 combined points, with Smart contributing 14 assists, four steals and a block while shooting 44% from three on nine tries, while shooting 50%.

“I hear all the chitter-chatter about me not really being a great defender, and I can’t guard fast guards, shiftier guards,” Smart told John Wallach and Cedric Maxwell on 98.5 The Sports Hub after holding Charlotte to 86 points. “A. Sherrod Blakely said so, and those guys at the Garden Report. All of them don’t think I’m a great defender, so I’ve just been coming out every game trying to prove and let them know that I’m still first team two years in a row running so shut the f*** up.”

Sherrod appeared on the Garden Report amid trade rumors when various reports held that Smart would be the centerpiece of a potential Aaron Gordon deal, who Keith Smith reported has been coveted by Boston for years. Sherrod suggested a Smart-for-Lonzo Ball swap instead at the time, while earlier in the show emphasizing the power of Smart’s leadership since his return.

John Zannis actually said on the Garden Report consistently this season that Smart’s on-ball defense and ability to stick with the league’s quickest guards declined. The panel labored over whether to give up Smart for Gordon, with John and Jimmy Toscano leaning yes, while Josue Pavon and I said no.

The Garden Report has also assessed the Celtics’ defense in full this year, and that includes Smart as part of lineups that have declined from a 107 defensive rating to 113 this year. Boston outscores opponents by three points per 100 possessions with Smart on the floor, the same as they did in 2020-21, but that figure entered the weekend at +1.1, before Boston outscored Houston and Charlotte by a combined 37 points in Smart’s minutes.

The Celtics play a team defense that has regressed relative to the league. NBA teams have yielded 1.3 more points per 100 possessions than they did in 2019-20, for an average of 111.9. Before Smart went down, the Celtics allowed 109 PP100 during Smart’s minutes, which rose to 113 while Jaylen Brown and Jayson Tatum played amid Smart’s absence. Since Smart returned, the team is allowing 110 PP100, which would rank in the top 10. That’s good.

The Celtics set a standard last year though, by allowing 3.3 fewer points per 100 possession than the league median, ranking fifth in defensive rating and boasting an NBA-best transition defense that allowed Boston to reach the east finals. This year, it’s an average collective. That’s not completely Smart’s fault, but he is part of a defense that with similar personnel to last year slid on that end of the floor through 50 games.

“I don’t think our defense has been very good this year period,” Brad Stevens said after the Pelicans loss last week. “Defense works only if five guys are all playing it at an elite, physical, tough, engaged level and we just haven’t all year enough of the time.”

It’s difficult to point out individual culprits in a Celtics defense that switches everything, hands off drivers to centers near the rim and plays team-based schemes against difficult matchups like Giannis Antetokounmpo and Zion Williamson. Team-based defensive metrics have declined to career lows for Smart, including a 0.1 defensive box plus minus and 0.9 defensive win shares. His steal percentage is below his career average, but his block percentage is above.

The difference is Tatum is 22, Brown is 23 and Smart is 27. Smart had to recover from a leg ailment that impacted his conditioning and movement. During his calf tear recovery, Smart considered himself only 30% movement-wise.

The Celtics’ individual pieces may be hurting on defense because of each other’s absences, awkward lineups and general inconsistency. In any case, nobody is excused from the regression.

“It’s been a weird season,” Jayson Tatum told Stephen A. Smith last week. “It’s thrown a loophole in our season and throughout the NBA, it’s been a tough year and that’s why some of the records look the way throughout the league.”

Smart then held Terry Rozier to 0-of-2 shooting and a dreadful 0.71 points per possession for Charlotte after Luka Doncic achieved 1.25 PPP against him last week. Giannis Antetokounmpo, Khris Middleton and Kyrie Irving hit him for 13-of-22 shooting in over five minutes of one-on-one action earlier.

Other matchups like Russell Westbrook, Collin Sexton and Ja Morant resulted in seven forced turnovers and 1-of-12 shooting when Smart guarded them. Those three qualify as shiftier guards, as does Rozier. John questioned the echelon above them, like Irving.

The results, as they have for Boston this year, depend on the day. Smart’s value remains instilled in his ability to defend players ranging from Joel Embiid to Damian Lillard. While he may not be perfect matchups for either, his ability to compete in both befits his role as the center of Boston’s switch-heavy scheme that earned him all-defense honors. Sometimes Stevens puts him on assignments that emphasize his ability to help. NBA defense is no longer about locking down in isolation like when Paul Pierce played.

Smart flashed that rare moment face-guarding Rozier over the weekend, and while the personnel in front of him wasn’t elite, his energy spread to his teammates for an elite team defense performance that indicated top-10 potential.

Concerns that criticism and trade talk would sour Smart’s buy-in went the other way, and shortly before the deadline amid his name being floated he led a team meeting where the team shared its gripes and regrets. Smart audibly laughed at the Garden Report’s critique, happy to prove them wrong more than angrily insulted. That’s Smart’s intangible impact Boston decided not to forgo at the deadline in hopes he’ll be part of the answer.

“Everybody agreed, this is a bad feeling. This is an ugly feeling that we’re feeling,” Smart said after a March team meeting. “We don’t want to feel like this, and we don’t want to look back on this season and say ‘damn, we could’ve done this’ … we all agreed we want to evolve as a team.”