Marcus Smart Redeems Himself in Win Over Kings 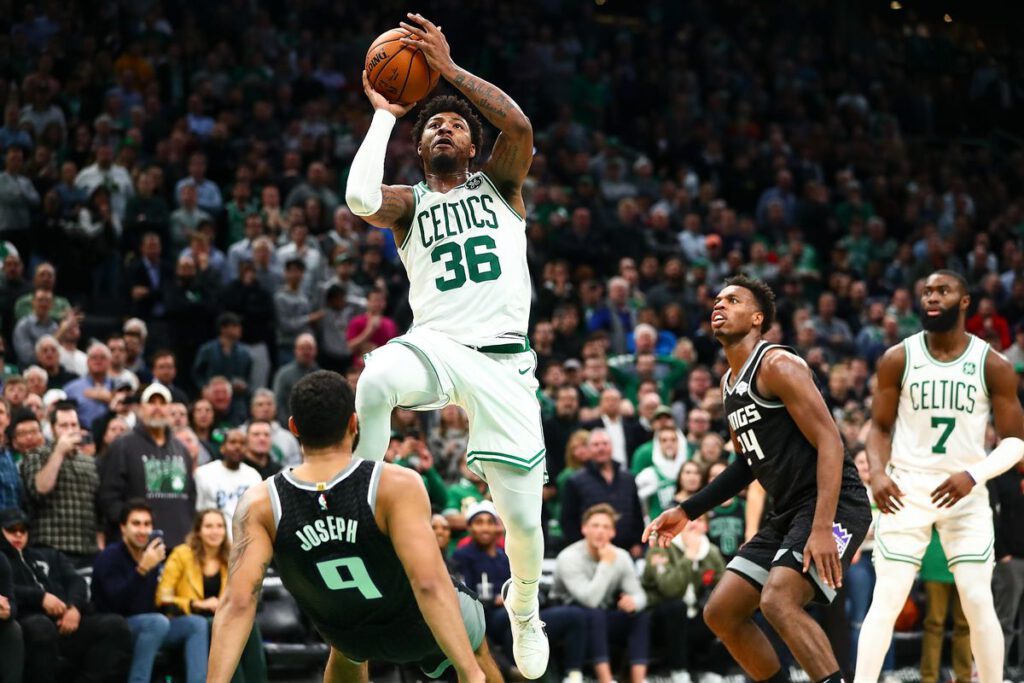 Smart, who’s typically one of the last Celtics players to finish his pregame workout before heading back into the locker room, spent extended time with Lawson on two things: pull-up 3-pointers and driving floaters. Searching for consistency, Smart refused to conclude both drills until he consecutively connected on more than just a few attempts.

From behind the arc, 10 was the magic number and in the paint, Smart drained six straight before he ran off the parquet and into the tunnel. It was almost as if Smart was determined to shake off the ghost of November 17’s heartbreaking ending in Sacramento and this was the best way he knew how to break the spell.

It felt like Smart’s potential game-winning floater against the Kings bounced off the rim 17 times before it fell off the cylinder and concluded a 100-99 loss. Ironically, Smart found himself in an eerily familiar late-game situation Monday night.

Except for this time, he watched the ball bounce over the rim and through the net to give the Celtics a one-point lead with only 31.1 seconds left to play and it turned out to be the game-winning basket as the Celtics found themselves on the right end of a one-point (103-102) victory.

“It was a good feeling,” Smart said after the game. “When I shot it and I saw it on the rim again, I said ‘I got to get it this time.’ It felt good to finally see the ball go in. It’s just ironic that it happened to bounce like that. I got it this time.”

Smart scored an efficient 17 points on 7-of-12 from the floor to go with his 7 assists. He started at the point guard position in place of Kemba Walker (strained neck) and made his fifth and final steal of the night on the very next play to grant the Celtics another opportunity to seal the win.

After Jayson Tatum (20 points, 6 rebounds) missed a corner 3-pointer, Bogdan Bogdanovic’s game-winning fadeaway 3-pointer didn’t stand a chance of going in as the game clock expired. The Celtics escaped Buddy Hield’s 41-point career night, he remarkably made 11 3-pointers and finished 15-of-26 from the floor. He was the reason the Kings nearly won its season series against the Celtics.

When Hield’s final trey of the night found the bottom of the net with 1:44 left to play, it pulled the Kings to within one point. His outside touch proved to be contagious when Cory Joseph tied the game at 99 with just over a minute left and when Bogdanovic’s go-ahead 3-pointer pushed Sacramento ahead (102-101) with only 39.8 seconds remaining.

If it wasn’t for Smart’s late-game execution, things could have ended differently. It was a close call for the Celtics and in the very end, it was also a close call for Smart, who was vividly in pain after he went to rebound the Kings’ final attempt of the night.

Smart ran towards the locker room holding his left hand.

“Yeah, just jammed it and my knuckle on my left ring finger — something that has been bothering me since the USA trip and just reaggravated tonight,” Smart said.

The final play of the night wasn’t the first time he hurt his hand Monday night.

“It actually happened twice,” Smart said. “The last play was the last time it happened. It happened earlier in the game right when I started to get the feel back for it the last play happened and re-irritated it again. But everything is alright, I got it compressed and just going to evaluate it tomorrow and see how it is.”

In the meantime, the Celtics will prepare for their matchup against a Kyrie Irving-less Nets team Wednesday night.