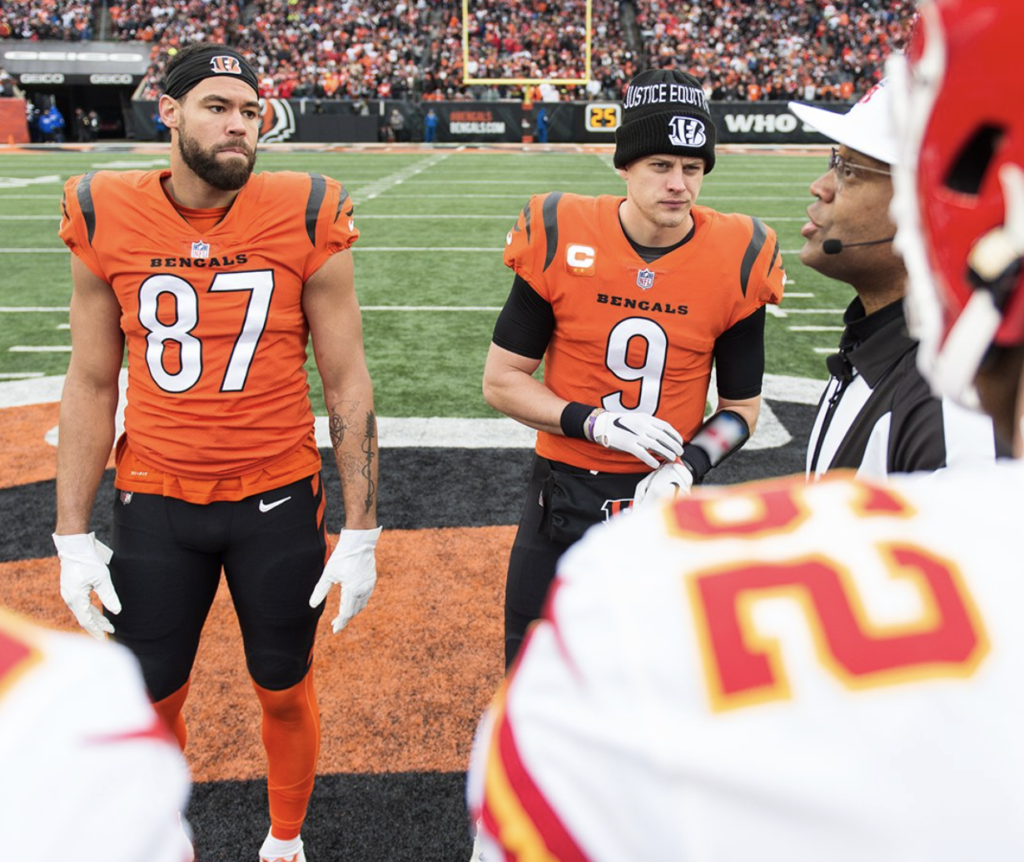 While Tony Romo and Jim Nantz of CBS were telling us during Sunday’s Bills-Chiefs AFC Divisional epic that Mahomes vs. Buffalo’s Josh Allen might be the next great rivalry to watch among quarterbacks in the NFL, and certainly the AFC, they might want to take a closer look at the match-up before us this weekend in the AFC Championship.

And it doesn’t stop with the quarterbacks, not by a long shot. This game features two defensive coordinators that will be tested to their limits to make sure their defenses can keep up with elite weapons on the other side. KC’s Steve Spagnuolo is trying to contain Joe Burrow, Ja’Marr Chase, Tyler Boyd, Tee Higgins, C.J. Uzomah, Joe Mixon and Chris Evans.

Cincinnati’s Lou Anarumo will try desperately to replicate the second half on Jan. 2 at Paul Brown Stadium when his defense held Patrick Mahomes and the Chiefs to three second-half points. Anarumo will be losing sleep this week thinking not only about Mahomes on the ground and through the air but Tyreek Hill, Mecole Hardman, Byron Pringle, Travis Kelce, Jerick McKinnon and Clyde Edwards-Helaire. What happens if the Chiefs throw different wrinkles at the Bengals, which with Chiefs head coach Andy Reid in charge, is a near certainty.

With regard to quarterback play, this game may very well be more of a flashback to the AFC Championship of Jan. 20, 2019, at Arrowhead Stadium, when Tom Brady matched up against the Chiefs, who countered with Patrick Mahomes against Bill Belichick.

Brady and the Patriots jumped out 14-0 at the half. Then Mahomes awoke in the third quarter. The Chiefs eventually took leads of 21-17 and 28-24 before Brady and the Patriots thought they had it won, 31-28. That’s when the Chiefs, just like they did Sunday, marched down the field with under 40 seconds left and managed a Harrison Butker field goal to force overtime. That day, the Patriots won the toss, Rex Burkhead scored the game-winning touchdown without Mahomes getting a chance and it was off to Super Bowl LIII for the Pats.

Brady won countless playoff games with his mind and his ability to direct chess pieces before the snap. Mahomes, the game’s most athletically gifted quarterback, has reached the AFC title game all four years in his role as starting QB of the Chiefs with throws from every angle and runs that devastate a defense.

After watching Joe Burrow light up the Chiefs for 446 yards and four touchdowns on Jan. 2 in the AFC North-clinching win at Paul Brown Stadium, it’s fairly obvious that Burrow has the intellect to take the place of Brady in this rivalry.

Clearly, Josh Allen played at an amazingly elite level in two playoff games, throwing nine touchdowns and no interceptions. This is not to disparage the Bills quarterback. But when you’re looking at how Allen breaks down teams with his strong arm and powerful mobility, it’s very different from Burrow.

Burrow would rather have a defense beaten before he snaps the ball than try to beat it after he’s scrambling for his life.

“I think it’s still game-by-game and I think you still want to be balanced,” Bengals offensive coordinator Brian Callahan said. “But Joe can win us games. And when you get chances to do that, we’re going to probably let him do that. That’s usually how it works with great quarterbacks. And we feel really good that he is one of those types of guys.

“When we get him an opportunity to let him win a game, we think he can win it. But that’s not to say that we’ll just abandon any form of how our offense works and functions to that. But he’s certainly, when given the opportunity, responded well and won us games. It’s all part of how the game flows and how it works together. But at the end of the day, we’ve got all the confidence in the world in Joe to put the ball in his hands, let (him) go win the game.”

Then you have Ja’Marr Chase, who has become Burrow’s binky for very good reason. The two read defenses extraordinarily well.

“You have an idea going into the game by scheme how they play,” Callahan said. “We knew that Las Vegas is majority of a single-high team and they’re going to give you some matchups into boundary 1-on-1. And we were ready to take those. Some of it’s just post-snap recognition. Somebody will try to show a two-high shell and roll out of it. Joe sees those things really quickly. He’s got a great understanding of how the defensive structure works. He knows the 1-on-1s are likely to be. And when he can get Ja’Marr 1-on-1, he’s going to take it all the time.

“And what makes Ja’Marr so good at it is they’re both on the same page. Is it an over-the-top throw? Is it a back shoulder throw? Ja’Marr’s so strong into the boundary that when he gets a chance to release on a corner, if they try to squeeze him, Ja’Marr doesn’t get squeezed. He does a great job keeping his landmark. And he’s got great body control. He looks like a cat sometimes when he’s out there moving around and using his body. He can get his feet down and twist and contort and find the ball. It’s a combination of all those things. But Joe certainly knows when Ja’Marr’s going to be 1-on-1 and takes advantage of those opportunities.”

The last time the Bengals played the Chiefs: pic.twitter.com/1034P2wVlE

The weakness of the Bengals offense in two playoff games has been the very strength of their defense – red zone execution. The offense has just three touchdowns in seven trips. The defense has allowed only two touchdowns in eight tries by the opponent.

“It’s something we stress,” Anarumo said. “We’ve got a good blend of things that we do down there. We’re constantly changing it. The guys execute. So, they understand how important it is down there to keep make them kick field goals. That’s going to be huge this week, obviously. Just staying focused and we cannot allow touchdowns. We’ve got to make them kick field goals.”

That was the essence of the Bengals approach on Jan. 2, when the Bengals held the Chiefs to three points in the second half of Cincinnati’s 34-31 win. Hill had just 40 yards on six catches. Kelce had 25 yards on five grabs. Remarkable numbers.

“I just think guys sticking with the plan and knowing what type of leverage we wanted to play on him, and where and when the help was coming from on (Hill),” Anarumo said. “So, without giving too much away, we’ll see how that looked and how we did there. The yards came out good for us the first time. But they’ll watch that too, and have something, but we’ll certainly have some changeups, for sure.”

To understand the basics of what Anarumo is talking about, watch how the Bengals adjust their coverage at the line of scrimmage, 15 yards deep and over-the-top. The beauty of what the Bengals did lies in their communication and their ability to pass off assignments at the right time. The Bengals could be playing man within the first 8-10 yards and leverage their coverage to the sideline. Then they play a different coverage with different rules 10-20 yards out, and a Cover-2 or Cover-3 deep, which are essentially zones that split the deep part of the field into two or three areas.

Clutch play after clutch play. The defense continues to deliver.

It all depends on whether the Bengals and Anarumo go with what’s essentially considered a pattern match zone, a combination principle where corners, safeties and coverage linebackers have different responsibilities and play different leverage techniques at different depths.

Anarumo has had an outstanding season not only scheming his defense but communicating precisely what he needs from his players every week. The rules of their coverage techniques don’t change but the responsibilities can. Delivering this in a digestible manner is a trait of all great coordinators this deep into the postseason.

“I think just being consistent,” Anarumo said. “I think that the takeaways that we’ve gotten have come at timely moments in the games. And then when we’ve needed a stop at a crucial time, we’ve gotten it. Every week is a grind in the season, then you get to the playoffs, and it ramps up and you’re playing explosive offenses every week.

“So, you don’t want to give up yards, but some of this stuff is inevitable. It’s always about points. You want to do a great job in limiting yards, but at the end of the day, limit the points, win the game, and how do you do that? You do that by playing great red zone defense, taking possessions away from them on takeaways. We have to do that this weekend to give us a chance to be successful.”

Travis Kelce for the win in overtime.

Bengals will play the Chiefs in the AFC Championship.pic.twitter.com/6aKiRNsvSM

Then you must account for the ground game, which torched the Bengals for 155 yards on just 23 carries four weeks ago. Mahomes (69 yards) and Clyde Edwards-Helaire (60 yards), on seven carries each, were part of a ground attack that totaled 182 yards.

“Well, they kind of got you in a bind and they’ve done a great job of just sticking to the run and then when Patrick has to do his thing, he does his thing,” Anarumo told me. “So, knowing that they have that extra or added element now, it just puts that much more stress (on defense). If you’re going to play a light box and play split safety as well, they know that you’re, you’re a gap short or guy short in the front.

“So, it puts extra stress on the big guys up front and the linebackers having to play a gap and a half, and things like that. And then when you got a really special back, like they have, they have a number of them, it adds that much more stress to the whole thing.”

There are so many games within the game this weekend that are worth keeping a close eye on, if the camera operators can keep up.