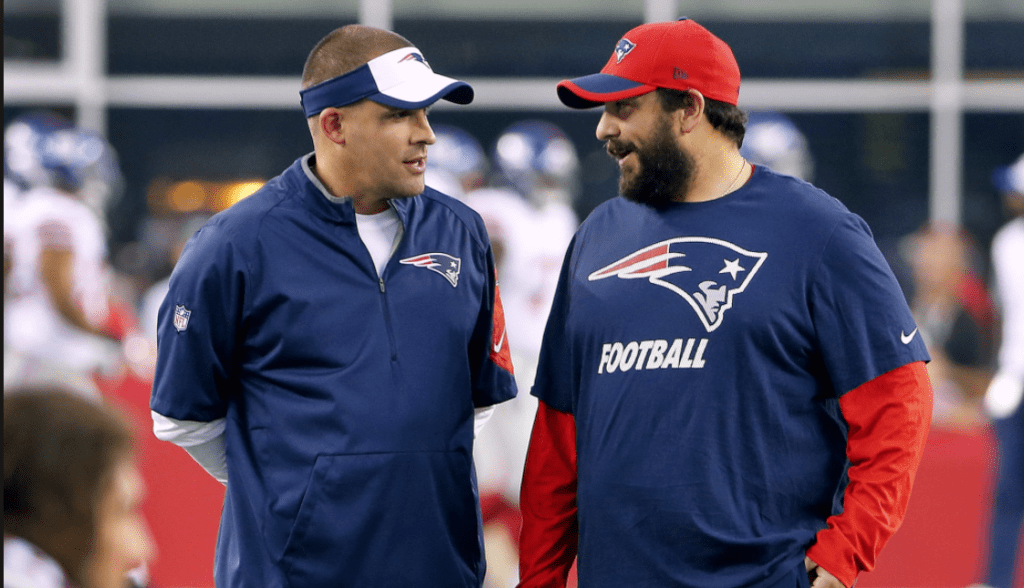 Josh McDaniels and Matt Patricia have been through this before.

Each year is different and each team’s wants and needs are very different. But every year on the day after the NFL regular season concludes, there are a flood of head coaching vacancies to be filled.

And every year it seems Josh McDaniels and Matt Patricia are among the first to be mentioned as candidates. This year, it’s no different. There are numerous reports that the Giants and Colts have all requested permission to interview McDaniels while the Giants and Lions are interested in Patricia.

And every year, the Patriots coaching staff has the enviable challenge of balancing outside interest with beginning playoff preparations during the bye week. Fortunately, for the Patriots, the team has had a bye week in each of the last eight seasons to help in this process. Both McDaniels and Patricia were asked about it during a Monday morning conference call following the 26-6 win over the Jets that locked up a No. 1 overall AFC seed.

“Yeah, I mean, that process – whatever it is – it will take place,” said McDaniels, who has been courted by the likes of the Browns and the 49ers in the past. “I mean, I’m certainly not aware of anything at this point. I’ve just been focused on trying to grade our tape and work with our staff to try to get ourselves ready to have a productive week here with our guys and get ready to go. All of that stuff, you know, usually takes care of itself. There’s a time and a place for all of that, and I’ve gone through it before, which is helpful in terms of being able to balance that and multitask it. But, my focus here when I come into this building will always be on what’s best for the Patriots and trying to do what I can to help us prepare to play our best game the next time we go out on the field.”

“I mean I have no idea about any of that,” Patricia said. “None of that is even really applicable for me right now because I don’t have any information on that. I’m in normal mode – came in and graded the Jets. [I’m] trying to take a good look at what we did on defense yesterday and try so see where things that were positive and things that we’ve got to get better on and working to make sure that we have a good, productive week this week and try to improve those things.”

Bill Belichick has always seen this time of year and the small window for McDaniels and Patricia as a reward for his coaches to look at other opportunities outside Foxboro.

“I think our staff has done a good job this year, as they have throughout the years,” Belichick said Monday. “I’ve been really fortunate to have a lot of great coaches and coordinators on the staff, so that’s been a real positive for me and a positive for our team and our organization. I don’t really know about the rest of it. We’ll see how it goes, but those guys have done a great job for me.”

McDaniels has, of course, been an NFL head coach before, leading the Broncos to an 11-17 mark over one and a half seasons in 2009 and 2010. He then returned to the Patriots after a stint as Rams offensive coordinator in 2011, joining New England in time to help in the postseason run to Super Bowl XLVI.

“Look, I’m 41 years old, so I have a lot of people that I look up to, a lot of people that I watch do their jobs that I have a tremendous amount of appreciation and respect for,” McDaniels said. “Bill [Belichick], certainly, is as good a mentor for me as I could ask for. Dante [Scarnecchia] has done a tremendous job for many, many years, and I’ve learned so much from him. I’ve learned a lot from the players that you work with. You get good feedback with them. I just think it’s important to watch and listen to other people to gather the information that you can and try to make the best decisions that you can make if you’re in a position of leadership. Hopefully, I’ve grown in that area and many others. I always try to do my best in my role, and certainly I haven’t reached my full potential in that conversation. I hope I continue to get better and better and better, and that’s what I’m going to work for.

“All of us here in this building always put the team first. If we don’t, then we wouldn’t be here, and that is not going to change. We’ve put too much time and invested too much of our effort and energy and commitment to one another to put ourselves in a position that we all tried to be in heading into the postseason to try to play our best football, coach our best football in January, and that’s the most important thing, period. All of those others things, there’s a time and a place for all of that stuff, but nothing is going to get in the way of us trying to put our best permanence forward the next time that we go out there on the field. That’s what it means to be a Patriot, and we’re going to do that and I know I’m going to do that. Anything and everything else, like I said, is secondary to that.”

“I think every year you try to grow, you try to learn as a coach and I think you do that every day, every week,” Patricia said. “You certainly deal with different players every year and those dynamics and those relationships are different. You learn how to deal with some different situations, a lot of things that come up maybe one year that didn’t come up the next, how to handle those or work within different parameters. Then certainly we’re always trying to learn and gain an advantage of knowledge in the scheme of everything, but just kind of the overall of how we do stuff. I mean I’ve been very, very lucky to be at such a great place for a long time and work for Coach [Bill] Belichick. [He’s] a great coach to follow and try to learn from and try to expand my knowledge. So we’re constantly trying to compete whether it’s just internally as a coach to be better, whether it’s out there on the field with an opponent. I think that’s kind of the drive that you have every day as a coach to try to make yourself better, to try to help your players be in a great position to perform on Sunday.”