‘Maybe this is Jaro’s year’: How Bruins are Rallying Around Jaroslav Halak 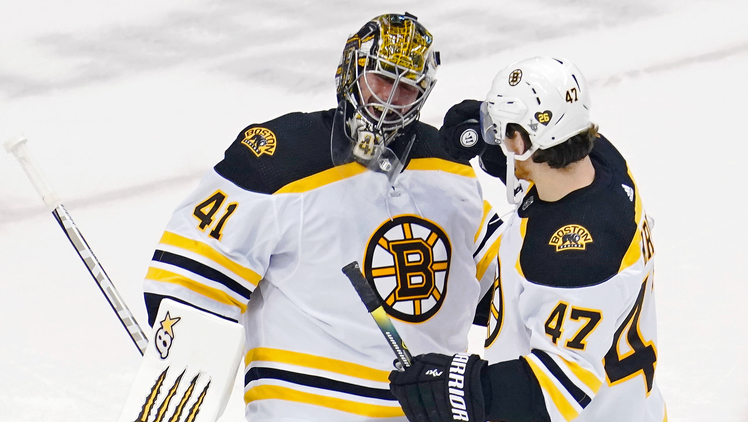 Due to the Bruins having older, more experienced veteran leaders, and because of his past antics, Brad Marchand doesn’t wear a letter on his sweater. The Bruins could throw an “A” on him in the future, but they have yet to make that move.

That has never stopped Marchand from embracing the role of a leader and in Game 3, Marchand took that to a different level.

Jaroslav Halak gifted the Hurricanes a goal just over six minutes into the final frame when he mistakenly shot it directly into Nino Niederreiter’s glove and the ‘Canes forward deposited it into the empty net to cut the Bruins lead to 2-1. Up until that point, Boston held all the momentum. That looked to be gone.

Having experienced his team’s starting goalie opt out of the postseason mere hours before the game and having just watched his replacement give Carolina a goal, Marchand had seen enough. He stood up on the bench with a message.

From that point forward, the Bruins held on to their 2-1 lead, eventually getting some insurance from none other than Marchand on an empty-netter.

“I think there was no collective let down like, oh boy here it comes,” Bruce Cassidy said about Marchand’s message. “We know we’re playing our game from the second period on. First period enough, we bent, we didn’t break, but our guys knew when we have our game, when we’re playing Bruins hockey, so that wasn’t going to deter us from keep going forward.”

Halak found out he was starting Game 3 when the rest of the team found out on the team bus headed to Scotiabank Arena Saturday morning.

Even with the short notice and preparation time, Halak carried the Bruins through Carolina’s 15-shot onslaught of a first period.

“We’re not going to change the way we play no matter who’s in net,” Cassidy said following Game 3. “We’ve proven that with Jaro here for the last two years and now the playoffs. We know he’s a capable goaltender, the only issue for us is Jaro hasn’t played a lot so we want to make sure you allow him a reasonable time to get back into game mode.”

Despite the gaffe on the lone Hurricanes goal, Halak was spectacular, finishing his duties Saturday afternoon with 29 saves on 30 shots. The Bruins defense in front of Halak did a good job, limiting the Hurricanes to only two high-danger chances at 5v5. Carolina only added two more high-danger chances on the power play. All other shots came from the outside.

The Bruins have always been comfortable playing in front of Halak. He’s certainly earned his team’s respect the past two seasons through quality play.

“You know I think that we all know the experiences Jaro has from playoffs,” Zdeno Chara said after Game 3. “You know he’s a proven goalie and he’s done a number of times and shown a number of times that he can handle these situations.”

But on Saturday, the Bruins looked like a more energized team in front of Halak. On penalty kills, the Bruins could be seen diving all over the ice to block shots. The team finished with nine on the day.

“Jaro is a popular guy in the room, guys want to play for him, and the next part of that message is it’s playoff hockey,” Cassidy said. “We can’t be worried about who’s out of the lineup. We worry about who’s in the lineup.”

Despite having not played since the first game of the round robin, Halak tracked pucks well. He certainly didn’t lack aggression, as was evident when he came out and knocked into Justin Williams, preventing the Carolina veteran from a breakaway.

He looked to be in midseason form.

With Halak as stellar as he was in Game 3 and the Bruins fresh off experiencing their starting goalie abruptly depart, prepare for Boston to rally around the goalie they usually deem as the “1B” to Tuukka Rask as “1A”.

“You know now it could be his turn to have a nice run,” Cassidy said. “I think it’s in the back of everyone’s mind if we want to reach our goals we’re going to need a goaltender in there to help us get there. No team gets there without solid goaltending.

“So maybe this is Jaro’s year.”

Halak’s performance on Saturday certainly inspired the rest of his teammates.

“This locker room, it doesn’t matter who is being asked to step up, it seems like guys come in and do that every time,” Bergeron said of Halak. “Jaro, it’s not an easy task and comes in and gives us a chance to win. He makes some huge saves, especially early on to keep us in the game.”

With Rask out of the bubble and away from the team, the Bruins are moving on without him. They wished him well multiple times, but the message was very clear: they must push forward.

“Tuukka had a great run last year,” Cassidy said. “So that’s certainly something we can rally around but by the same token it wasn’t going to be the end of the world to have Jaro in there.”

It’s far from the end of the world to have Halak in there. It actually just might be a new beginning for these Bruins.