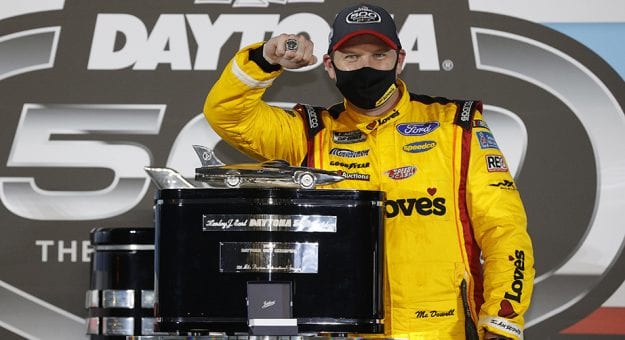 Michael McDowell won the Daytona 500 from the Daytona International Speedway on Sunday night.

McDowell was running third headed down the backstretch while he pushed Brad Keselowski to the front. After Keselowski made contact with leader Joey Logano, McDowell was able to sneak past as a massive crash erupted in the pack.

McDowell was ahead of Chase Elliott and Austin Dillon at the time of the caution, which officially froze the field and awarded McDowell his first career victory in NASCAR’s biggest race.

McDowell said he was excited to pick up his first victory after 14 years in the Cup Series.

“Just can’t believe it,” McDowell said.  “So many years just grinding it out for an opportunity like this.  Such a great way to get a first victory.”

With the laps winding down, a group of Ford drivers led the field.  Logano, Kevin Harvick, Keselowski and McDowell ran single-file until the final lap.  McDowell said the manufacturer teamwork helped give them all a chance at the victory.

“We had our Ford partners at the end and they all crashed; luckily I was able to make it through,” McDowell said.

Elliott was second at the moment of the caution, and he said he knew he came up short when he saw the caution lights come on.

“I don’t think it was very close,” Elliott said.  “Got next to him and saw the lights come on, so I knew it was over right there.”

Elliott, who began his championship defense on Sunday, said he was just excited to finish NASCAR biggest event after having bad luck in years past.

“Staying out of trouble…that’s not something I’ve done a very good job of here in this race,” Elliott said.  “We finished one, so I’m pretty pleased with that.”