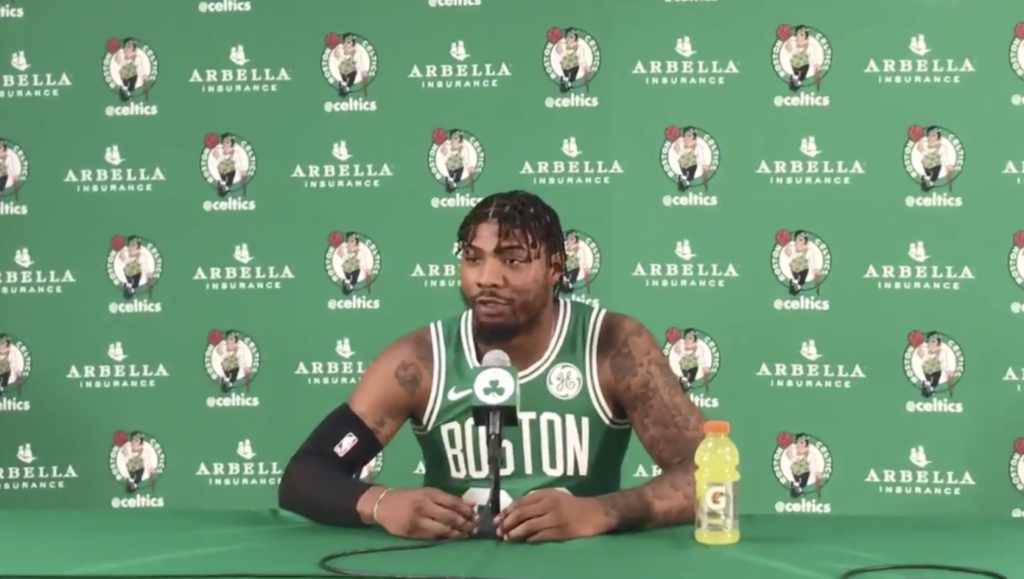 Marcus Smart feels himself getting old.

We use old in the relative sense. He’s on the younger side of the NBA, society and the team. Nobody in the room’s crossed from Rajon Rondo, Isaiah Thomas, Kyrie Irving and now Kemba Walker-led teams though. Through that and injuries, he wants to slow this season down. If he gets hurt, let it heal. He’s stressing patience for a new group.

As Team USA faltered in the World Cup, injuries accumulated for Smart. He entered with quad and calf concerns that held him out of the team’s preparation. Toward the end, his left knuckle ailed him. As Smart built a tough reputation for himself, he tried to fight through the pain earlier in his career. This time, he sat out the team’s final two games.

The time Smart missed with Team USA held less consequence than his torn oblique did, brushing against the Celtics’ playoff run. Smart expected to miss the first two rounds of the playoffs. Down 2-1 to the Bucks, he returned for the fourth and fifth games in a limited capacity and shot 1-for-11.

Boston’s entire media day carried themes of adjustment after turnover and last season’s debacle. Jayson Tatum kept his expectations to himself. Jaylen Brown, who guaranteed a NBA Finals trip last year, said he preferred to not place expectations on this group.

Kemba Walker, recently arriving from his Team USA stint, said he’ll go with the flow as he adjusts to the team too. He realized expectations come with this roster, but still has the feeling of a new kid arriving at school.

The Celtics are organizing together for the first time all summer. Largely due to the FIBA World Cup, their summers spread between personal work, China and the Auerbach Center.

Marcus Smart opens up about the #Celtics fresh start this season

“It is a fresh start. I mean, we all seen Jaylen Brown’s hair, right?” pic.twitter.com/RHOs7D3ydB

Their preseason slate begins on Sunday 6 p.m. against Terry Rozier and the Hornets. They’ll play with three wings, their bigs will run and occasionally Semi Ojeleye and Jaylen Brown could slide to the five. Beside that, the roster will need to build cohesion in a short span to establish a successful baseline. Last year’s 10-10 start set the stage for unstable lineups and inconsistency that struck throughout the season.

Smart said a big part of that process will be acclimating the rest of the team with Walker. Tatum, Brown and him got their reps alongside him in China. Now the younger portion of the roster will learn his tendencies.

Walker enters as the primary ball-handler and playmaker for Boston, but made it clear he’ll need to earn the leadership position on the team. Gordon Hayward and him still top Smart in seasons played. Smart, who showed up to media day in a white robe, holds the vocal reigns on a team he’s spent the longest with that he tried to save last year.

That futile effort resonated with him and a squad that is taking it slow. They’ll test lineups, learn their strengths and push players into roles they’ve never experienced before. Brad Stevens already envisions Enes Kanter taking some threes.