The Celtics are looking for a backup center and Mfiondu Kabengele and Trevion Williams arrived at Summer League with a real chance to help fill the role. 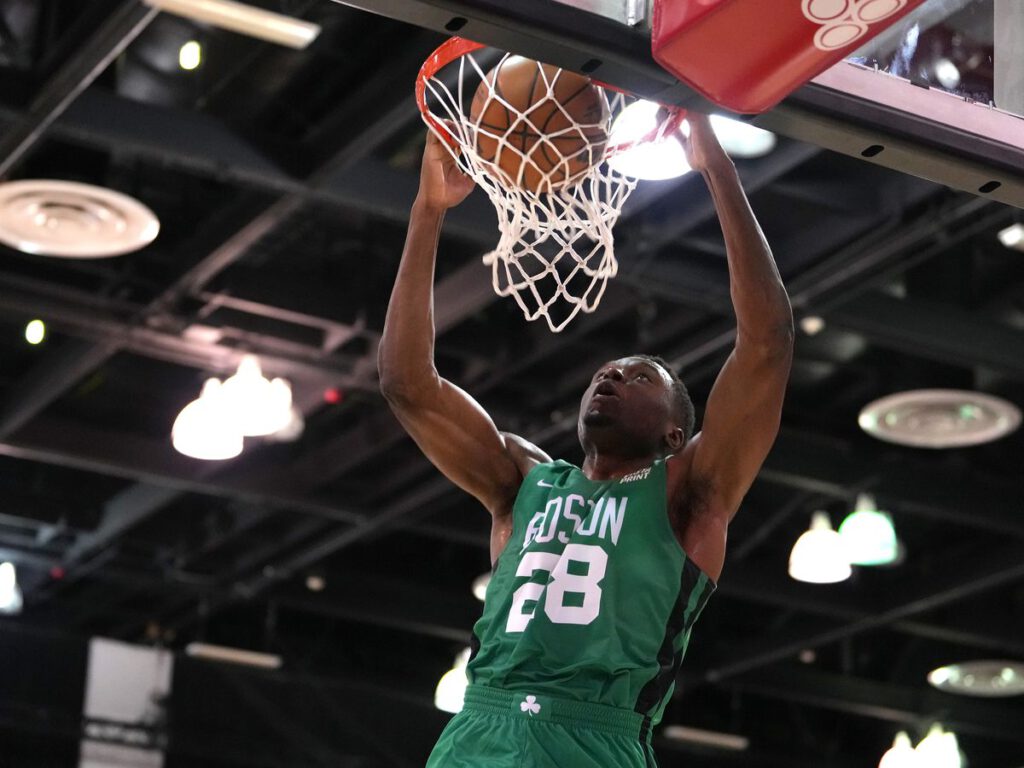 LAS VEGAS — Mfiondu Kabengele arrived alongside rookie Trevion Williams as the Celtics’ Summer League centers to a stern speech from Brad Stevens to the team, outlining the Celtics’ values and the importance of the team’s Las Vegas showcase. It’s an opportunity to advance their careers and prove they belong, head coach Ben Sullivan said as camp opened.

Kabengele knew a few of the players around him already, Brodric Thomas, from their 2019-20 season together in Cleveland, Jordan Bone, from the 2019 NBA Draft and Matt Ryan, from the Cavaliers’ Summer League team in 2020. Juhann Begarin appeared unfamiliar after a stashed season overseas in France following the 2021 draft, the Guadeloupe native a French speaker like Kabengele, who was born in Canada.

“I heard the accent and I’m like, ‘that’s not a Boston accent or an American accent,'” Kabengele told CLNS Media one-on-one after practice on Sunday. “So I thought he was from France.”

“His English is really good,” Kabengele continued. “He understands everything, terminology, some slang as well, so it’s really cool, really good. (He’s a) really big guard. Real big guard, physical guard, sees the play. He understands how to play the right way, making the extra pass, dive in, he’s really good at back cuts. I remember him and (Trevion Williams), during practices, they had a really good connection because (Begarin) would be cutting on the baseline a lot, Trev would give it to him in the mid post and they were killing us with that.”

Kabengele saw an opportunity with the Celtics to break back into the NBA after a one year G-League stint when the Celtics traded backup big man Daniel Theis and four other players for Malcolm Brogdon. The move opened three roster spots and left a hole behind Robert Williams III and Al Horford that remains unfilled as Boston’s $17-million trade exception expiration date looms in one week. Kabengele started at center in the team’s opener against the Heat, scoring 14 points with six rebounds and three assists.

Williams came off the bench at Purdue, grabbing six rebounds and dishing a pair of assists in his own first pitch for the position. Unselfishness defines both Williams’ personality and play style, he said at practice, evident in his unique passing ability at his position. Kabengele spreads the floor as an adept pick-and-pop shooter from deep. They’re both in position to enter developmental positions with the Celtics if they stand out this week. Boston’s due to pay over $40-million in luxury tax this season and will likely add a cheaper backup center with Williams and Horford able to stagger their minutes.

The Celtics’ Summer League team wants both of its big men to make plays, an easy transition for Williams as he hit Begarin on back cuts on his way to 10 free throw attempts that don’t show up in Williams’ assist total. Kabengele did damage on the roll, catching three alley-oops, two from JD Davison, and garnering three assists of his own. Sullivan came away impressed by his defense, as both a rim protector and in more versatile coverages, but his strengths lie on the offensive end of the court.

“My goal was to make sure to get the little things right,” Kabengele told CLNS. “The coaching staff’s talking about how to (set) good screening angles and making sure I roll, create dips in help side so I can kick out for the other guys. The way I can roll, that’s my main thing. Focus on the little things, crash the glass, set good screens and make plays on the offensive glass.”

Kabengele, now 24-years-old, played two seasons at Florida State as their go-to scorer, also off the bench. He won ACC Sixth Man of the Year while shooting 36.9% from three, then got traded to the Clippers from the Nets as the No. 27 overall pick on draft night, landing on a team that had just acquired Kawhi Leonard and Paul George.

Doc Rivers played Kabengele in only 12 games, his college teammate and second-round pick Terance Mann becoming the rookie who’d emerge for LA. Kabengele got traded to Sacramento after 23 games in his second season, averaging 4.1 minutes per game, closing the year out with Cleveland on a 10-day deal. He spent 2021-22 with the Rio Grande Valley Vipers, averaging 17.5 points and 10.6 rebounds on 57% shooting.

Dikembe Mutombo, Hall-of-Famer and four-time defensive player of the year, is Kabengele’s uncle and took in Summer League action over the weekend. Mutombo flew Kabengele and other family members to games, all-star events and holidays while the young big man was growing up living in Burlington, Ontario, the son of parents who emigrated from the Democratic Republic of the Congo.

“Going to dinner with Yao Ming, (Tracy McGrady), seeing all these great players, talking to them, seeing how much they respect my uncle, how they are around him, it makes you aspire to be that kind of person,” Kabengele told CLNS Media. “Just to see how he carried himself and how he is, it meant a lot, especially growing up.”

Kabengele watched highlights of Davison as he attended Alabama, coming away from their first game surprised at his facilitating ability, and grew familiar with Williams’ game after they overlapped for one year in college. Williams spent that fall in 2018 losing around 50 pounds after arriving at Purdue weighing 325. That willingness to change his body, focus on passing and transition to a second unit role as a senior earned him a chance with the Celtics, only 21-years-old after a four-year career.

Williams blew Ryan and Davison away immediately with cross-court passes and vision Kabengele had rarely seen from another player at their position. Kabengele emphasized that Williams only averaged 20 minutes per game, so over 40 minutes his assist output would’ve been closer to 6.0 per game.

“Coach has stressed it a lot, he brings it up in film all the time, utilize me,” Williams told CLNS Media. “I want to be that guy that puts other guys in positions to be successful. When that works, everybody eats … the cross court pass is probably one of my favorites. It’s not something you’d expect from a big, so I do think I’m different in that aspect. I do enjoy that, catching the other team off guard, a lot of teams don’t expect it. It’s something I’ve worked on, I’ve done in college and I’ve tried to perfect it as much as possible.”

Defense will dictate which, if either, of Williams or Kabengele can grab the second two-way or even a potential full time roster spot to become part of the team’s dynamic at the second big man spot. It wouldn’t be surprising to see Horford get back-to-backs off, reduced playing time and even more time at the four to reduce the amount of banging he’s forced to do through the course of the regular season.

Backup veterans like Dwight Howard, Hassan Whiteside, Aron Baynes and Montrezl Harrell remain on the market, while the Evan Fournier trade exception could land anyone from Jakob Poetl to Dwight Powell, Mason Plumlee and Maxi Kleber. All would escalate Boston’s tax payment to over $60-million in a deal where the Celtics don’t send any money back. It’s an important role. given Williams III’s past health concerns and Horford’s age, but one Theis filled well despite not playing his best. Young prospects could do the same.

“I really appreciated (Stevens’ speech) because it kind of gave us the groundwork of how to act,” Kabengele told CLNS Media. “Brad was there, Ime was there, watching us practice. Jayson was there watching what’s happening, Grant helped us here and there, so a couple of players and staff and executives are there throughout Summer League practices. (Brad) was very stern, he’s serious, he’s about his business, so I appreciated that, because it kept me in check. When he talks about what he expects from us. You think Summer League, you play and run around, but this is an opportunity for everybody to make it to the top so you have to take it with a lot of seriousness.”