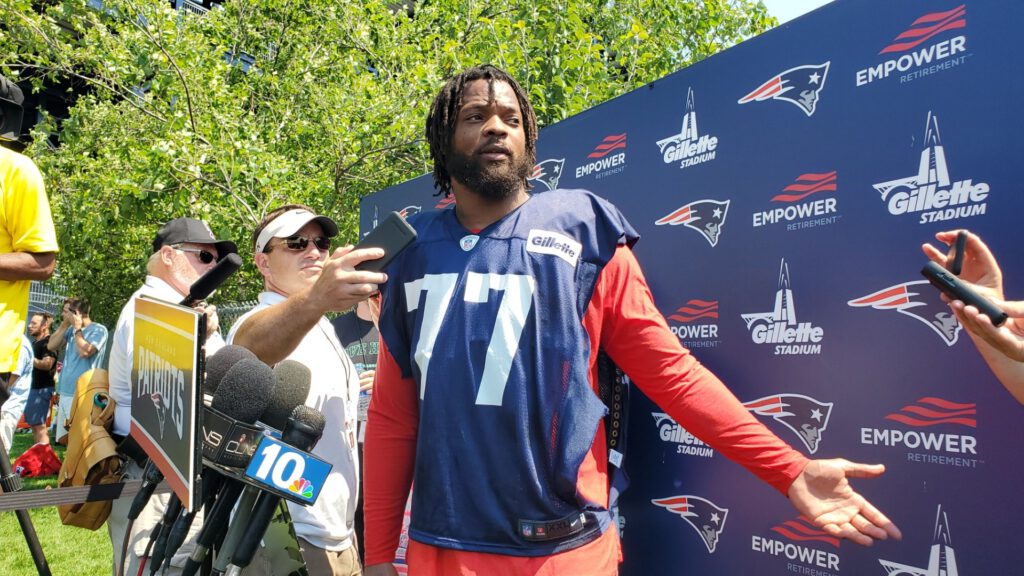 FOXBOROUGH – Get ready for a wild ride with Michael Bennett.

The 33-year-old defensive end, who can also play inside, offers the Patriots a veteran who has seen just about everything NFL trench warfare has to offer.

Clearly, the Patriots saw something in Bennett’s ability to help fill the void of Trey Flowers when they sent a fifth-round pick in 2020 to Philadelphia for him and then a month later signed him to a restructured two-year, $16.75 million extension through 2020, with a $4 million signing bonus and $4 million guaranteed.

In six of the last seven seasons with Tampa Bay, Seattle and Philly, Bennett has played all 16 regular season games, amassing 57 of his 63 career sacks, including nine last year in his only season with the Eagles.

“I don’t really have any expectations,” said Bennett, who went undrafted out of Texas A&M in 2009 because of perceived inconsistencies in his game. “I think I want to come in and just work as hard as I can every single day. I think that’s the only kind of expectation I have. I have an expectation of running hard, working hard, and just proving myself as a veteran player.

“I think my whole career I’ve always been doubted, and this is another opportunity to play under the lights again and just keep proving. I think as a defender – as a quarterback gets older, people think that they improve, whether it’s Tom [Brady], whether it’s Drew [Brees], or whether it’s Phil [Rivers] – but the defenders, as you get older, people think you go down. So as a defender, if you get an opportunity to playing in the older ages, it’s good to go out there and keep balling.”

A plane trip from Hawaii Saturday into Sunday didn’t keep the three-time Pro Bowler from stepping on the field Sunday and participating in his first Patriots practice in pads.

Like his brother Martellus, this is one unique and immensely talented dude the team is welcoming into their locker room. What advice did Marty give him about playing in Foxboro for Belichick?

“He just said just do your job,” Bennett told me after his first practice. “I think he said that Coach Belichick is a great coach and he’s always going to ask you to do more than what you’re capable of doing, make you change positions or make you do things that you’re not used to doing and work on every skill. I’m happy about that. That’s all you can ask for as a player is a coach who wants to help you continue to get better and help you prove yourself over and over.”

Playing outside one’s comfort level is a Belichick trademark with veterans who come to Foxboro wanting a run at a ring, something Bennett already earned with Seattle in Super Bowl XLVIII. You come to Foxboro and the coaching staff is likely going to coach you in a way different from your previous NFL experience. Credit Michael Bennett for understanding that at the get-go.

“I think it’s important to get comfortable with being uncomfortable, so when it’s time for us to be in big moments like they’re always in, that we have the bank to go back into because we put so much into it,” Bennett said. “I think it’s important. Training camp is always fun. It’s another time to get a chance to work with young guys, and you get a chance to work on your skills and prove yourself every day.”

Bennett, as understandably tired as he appeared in his presser, said all the right things and genuinely seemed enthusiastic about just being on the field in the 90-degree heat.

This is a player who has been vocal on social justice issues, politics and life in general in his 10 previous seasons in the NFL. Don’t expect that to change all of a sudden but one thing’s for sure, if Belichick makes a request of him, he’s more than likely to adhere to it.

Why is that? Well, consider how Bennett responded Sunday when asked what it meant to have the head coach grant him time to tend to a personal matter that caused him to miss the first three days of camp.

“I was lucky Coach Belichick – it’s nice when you have a coach that sees you as a human, sees you as a human being, not just a number and you’re able to go talk to him, tell him what’s going on, and you’re able to go take care of it,” Bennett said. “That just makes you want to play harder for a coach. When he believes in you, and lets you take care of your family first.

“I think everybody’s always concerned about how their boss is going to take into consideration if something happens back home, but when you have a boss who respects you as a man, it’s easy to go out there and play for him like that. I think for me, that’s easy to look him in the eye and whatever he asks me to do, I’ll do it simply because I know he respects me as a human being, and I respect that.”

Bennett heard and saw social media rumblings that his absence pointed to a likely retirement from the NFL before ever taking a snap with the Patriots.

“I was surprised that people thought I would quit,” Bennett said. “I haven’t quit on anything in a long time. I don’t even quit when I play my daughter in checkers.

“Oh, I had a personal reason. I didn’t retire, I heard everybody said that I retired. I was laughing at home – laughing – like no, I didn’t retire,” Bennett insisted. “No, I just had a family issue that I had to go take care of.”

It’s somewhat ironic that Bennett pointed to Ty Law and Adalius Thomas as two Patriots he modeled himself after early on his career, two players that were never afraid to be outspoken, even within walls of Foxboro Stadium or Gillette.

“I’m just a lucky guy to be able to come into an organization with no added pressure,” Bennett told me. “This is just a team, I mean, I always dreamed about getting a chance to play in that stadium. When I grew up, Adalius Thomas and Ty Law and all those guys were guys I looked up to, and it’s just an honor to be able to walk into that place.”

Bennett’s first practice was fairly impressive considering the jet-lag he was enduring to just get on the field. And the fact that the team permitted him to fully practice in pads speaks to his conditioning and ability. He took part in 1-on-1s, stopped a pair of runs at the goal line in red zone drills and displayed his trademark swim moves against second and third team units.

“It was exciting. I think that being able to get out there on the field with those guys and spend the off-season with them, and finally get a chance to be on the field is good,” Bennett said. “All these guys, they’re great players, and to finally get the chance to have some type of camaraderie with them is just a special opportunity.”

For a player who has been unstoppable when his motor is fully engaged, Patriots fans are hopefully that he’s still fully motivated after his 10 NFL seasons.

“What motivates me? I think winning. I think the opportunity to build teams – that’s what’s the best part of the game,” Bennett said. “I love winning – but I also love to build a great relationship with new people and the opportunity to be put in new positions and try new things and keep improving myself as an individual, as a father, as a husband, as a businessman. The opportunity to have that growth – I’ve been comfortable in Seattle over there. Now it’s time for me to take another step in something I can improve in, whatever they ask me to do, things I’m not used to do doing and I want to improve on that.”