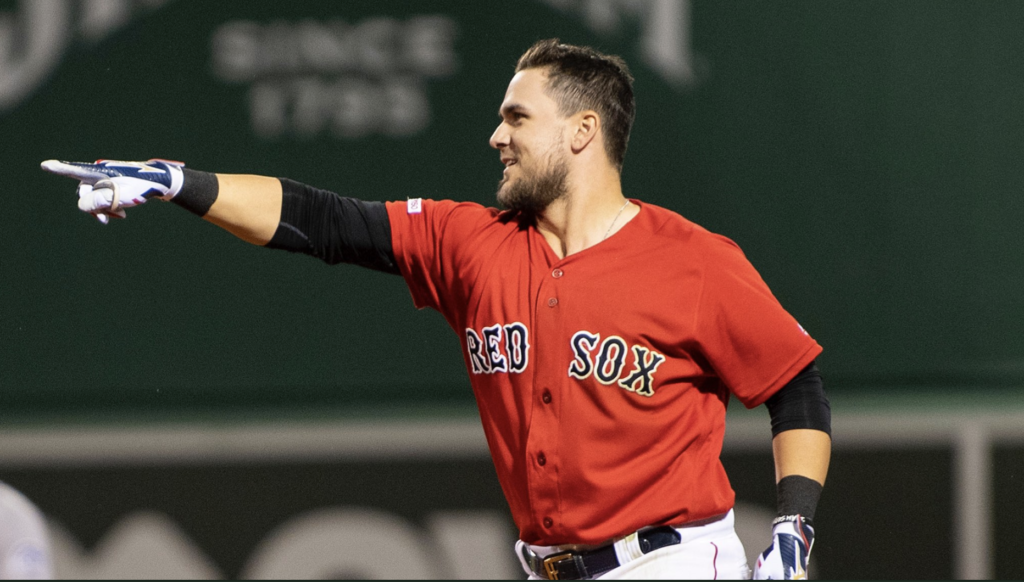 BOSTON — Dave Dombrowski might want to ask more 5-year-olds for some pointers on how to motivate his Red Sox. Not that Michael Chavis needs inspiration right now.

On Sunday, during the traditional guest public address inning, Jaxon Younger took the mic from Henry Mahegan and screamed “MICHAEL CHAVIS” in the 5th.

The 23-year-old Chavis, apparently taken aback, paused in the box, pointed up in acknowledgement, and then smashed a Wade Miley offering 420 feet over the Green Monster on the first pitch.

“Honestly it was cool,” Chavis said. “It was something I’m going to remember. Hopefully, he does as well.”

“We need more of that,” Alex Cora said after his team used the latest tape measure shot from Chavis and a shout from the guest announcer to rally to a 4-3 win over the Astros and salvage a game in the weekend series.

“With every swing you feel like he has the chance to hit the ball out of the ball park,” Cora said of his newfound slugger.

Indeed, Chavis has been crushing the baseball at a rate and with authority rarely seen in Boston or anywhere in his first five weeks with the Red Sox. Since coming on the scene, Chavis has eight homers and is slashing .290/.389/.570 with 22 RBI. His eight homers are not just leaving the park, they’re entering the orbit around the planet.

This is just the kind of pick-me-up the 24-22 Red Sox need. The team has been playing like it’s been in a World Series hangover for the first seven weeks of the season, with glimpses of their potential a year removed from their historic 108-win regular season and ninth World Series title.

His 420-foot shot was the seventh of the season over 419 feet. As a matter of fact, only one homer has been estimated by MLB’s statcast at under 400 feet, a 374-foot shot on April 25 against Detroit’s Jordan Zimmerman. He’s just 5-feet-10 but hitting home runs that compare with the likes of Manny Ramirez, David Ortiz and Jim Rice.

“I feel pretty good, honestly,” Chavis told me. “The first thing when I got called up that (Steve) Pearce said to me was, ‘It’s the same game, just bigger platform.’ It is. It is the same game I’ve been playing my whole life. In the box, just trying to stay consistent with what I’ve been doing.”

Chris Sale was again brilliant on occasion Sunday but not so hot on others, namely a 94 MPH fastball left up to Carlos Correa. When Correa mashed that mistake from Sale 448 feet to center, it was 3-1 Astros in the third.

Chavis got the game-tying rally started in the fifth with his moonshot over the Monster. Yuli Gurriel misplayed a pop from Xander Bogaerts, allowing Mookie Betts to score with 2 out to tie the game.

“Before the game, I (told him) nothing changes,” Cora said. “Just go out there and get a good pitch and swing. I like that. I really do. We saw that over the weekend with Springer. He was ready to hit. First two at-bats, he swung at the first pitch. And he wasn’t afraid to swing at the next one.”

Indeed, Chavis was doing his best Nomar Garciaparra in this one. He swung at the first pitch in three of four plate appearances, taking Ball 1 in his first at-bat before lining out to short. He saw six pitches total Sunday, going 2-for-4 with his eighth homer.

Chavis batted leadoff for the first time in his pro career Sunday. As a matter of fact, Chavis couldn’t recall the last time at any level he batted in the first hole.

Was he excited to hit leadoff Sunday?

“Of course, it means I’m probably going to get more at-bats,” Chavis said.

After Chavis and Bogaerts tied the game the previous inning, Sale left a one-out, bases-loaded mess to Marcus Walden to clean up after issuing his fourth and fifth walks of the day in the sixth inning of a 3-3 game.

The wholesome homer content you came here for. 😭 pic.twitter.com/AexGfhCrNz

Walden bailed him out, getting Jake Marisnick to ground into a 6-3 double play. Sale’s line: Four hits, three runs, 10 strikeouts and five walks.

An inning later, Chavis’ impact was felt again – this time in the field – when Walden walked Alex Bregman with one out. Michael Brantley grounded a ball to Chavis at second. The rookie calmly backhanded the grounder and then flipped to Bogaerts who nipped Brantley at first (after a challenge) for the inning-ending double play.

“That double play, that was a tough play for a guy that hasn’t played that much second base,” Cora said. “That little in-between hop, backhand it, flip it.”

Chavis began the rally in the seventh with a one-out single. He would get forced at second on a bloop to right that wasn’t caught by Gurriel. But Betts would eventually score on a Bogaerts double and the Red Sox pen of Matt Barnes and Brandon Workman took care of the rest.

“We’re very happy with his approach, his progression at second base,” Cora said. “We saw this offensively in spring training. We knew it was just a matter of time.”

Just as Cora was finishing his final sentence, he cringed as he heard a loud thud in the weight room behind the brick wall in the interview room. There’s been a lot of thunder coming from the Red Sox ever since Michael Chavis arrived on April 19.

“It’s been fun,” Chavis added. “I think this is the most fun I’ve had playing baseball in five years (of pro baseball). It’s been incredible. The atmosphere, the vibe in the clubhouse, the fans. It’s just been incredible. It’s a lot easier to be comfortable when you’re having fun.”