Mike Mayock isn’t about to predict what Bill Belichick will do at No. 31 in the NFL draft 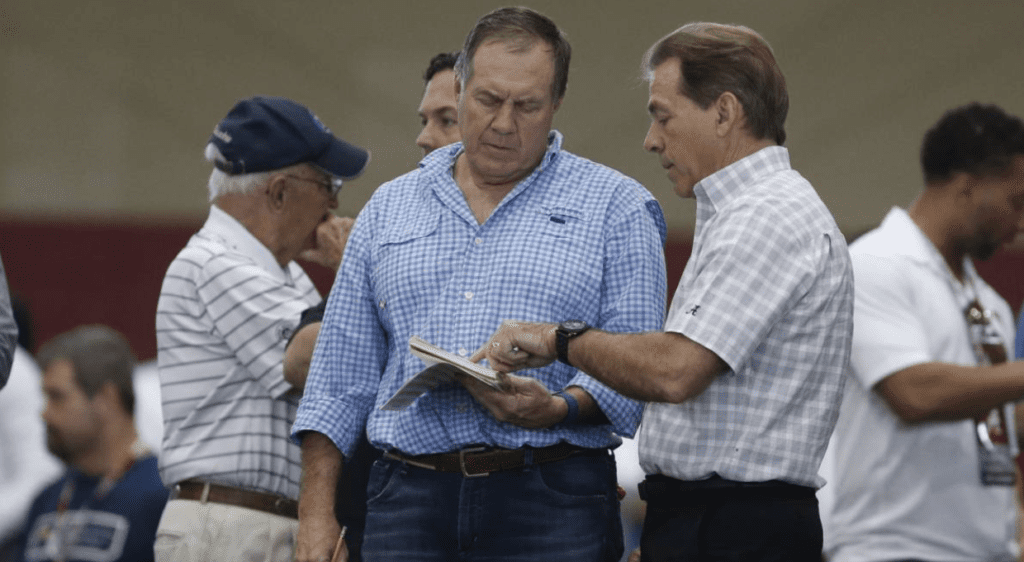 Bill Belichick has always taken an unconventional approach to the draft.

This year figures to be no different as the Patriots pick 31st overall in the first round. Will they pick a potential replacement for Rob Gronkowski or Tom Brady? Will they boost a secondary that got torched in the Super Bowl and will likely part company with Malcolm Butler? Will they look for a linebacker to play along side Dont’a Hightower and Kyle Van Noy?

Mike Mayock is a draft expert for the NFL Network and his knowledge of all levels of college football is among the very best in the country.

Clearly, there’s a lot of interest in New England in defensive back talent, given the likely departure of Malcolm Butler. The Patriots also have potential needs at linebacker (Rashaan Evans, Alabama), safety (Ronnie Harrison, Alambama) and tight end (if Rob Gronkowski walks).

“I don’t think you can guess what Bill’s going to do,” Mayock told me. “I really don’t. I think he’s the smartest football person I’ve ever been around. The two Alabama players, which brings up Nick Saban, who one of the smartest football people I’ve ever been around. Those two guys are little bit outside the box but the way they run their programs speaks for itself.

“I would imagine, and I can’t speak for Bill but, obviously Alabama players are interesting guys because when they come out they’ve been coached hard, you know what you’re getting.”

Here are Mayock’s position rankings as found at NFL.com.

“Rashaan Evans is a great off-the-ball linebacker,” Mayock continued. “He can run, shows up in coverage, comes downhill, tackles. He’s going late one or early two. Harrison the safety, all over the field. I’ve got him as a second-round pick but he could go in the first round. He can drop down and cover people but I don’t think that’s his forte, and I think in today’s NFL, I think you’re looking to get safeties that can drop and cover a slot. He could but I think he’s better in the box.

“It’s almost impossible to guess what Bill is going to do. Just when you think he’s going to trade down, he trades up or he signs a future Hall of Fame wide receiver in free agency. You just never know with Bill and I wouldn’t even try to guess.”

“Historically what he has shown you, and you can go back to before (Jimmy) Garoppolo and (Jacoby) Brissett, he took a third-round pick on Ryan Mallett. So it’s second- and third-round picks with the anticipation of Tom Brady having to retire some day. It’s getting more and more urgent, obviously,” Mayock said.

“If you take a look out there, the one way-outside-the-box conversation is Lamar Jackson, who I think is the most electrifying player in this draft. I think somebody is going to take him and commit their offensive philosophy to him. I would tell you the most nervous 31 people in the league will be the defensive coordinators that would have to play against him. It’s a different kind of commitment, a different kind of philosophy, and I’m not suggesting the Patriots are going to do that. I just want to get that out there, in general, for anybody looking at quarterbacks.

“As far as the Patriots are concerned, I think there are some interesting second- and third-round potential quarterbacks this year. Mason Rudolph from Oklahoma State is a really logical player — prototypical drop-back type of guy. I don’t think he has great escapability, but I think he can do what the Patriots’ offense asks him to do. Along with him, I’d say Luke Falk (Washington State) and Mike White (Western Kentucky) are very interesting players, and then a notch below that I’d say (Richmond’s) Kyle Lauletta and (Toledo’s) Logan Woodside.

“If you look at the five potential first-rounders (Sam Darnold, Josh Rosen, Josh Allen, Baker Mayfield, Jackson), plus Mason Rudolph, Falk, White, Lauletta and Woodside, that’s 10 quarterbacks. In a typical draft, there are only about 11 to 12 quarterbacks that get drafted overall. So I think there is a little bit better quality in the top end, through three or four rounds, than we’re used to seeing.”